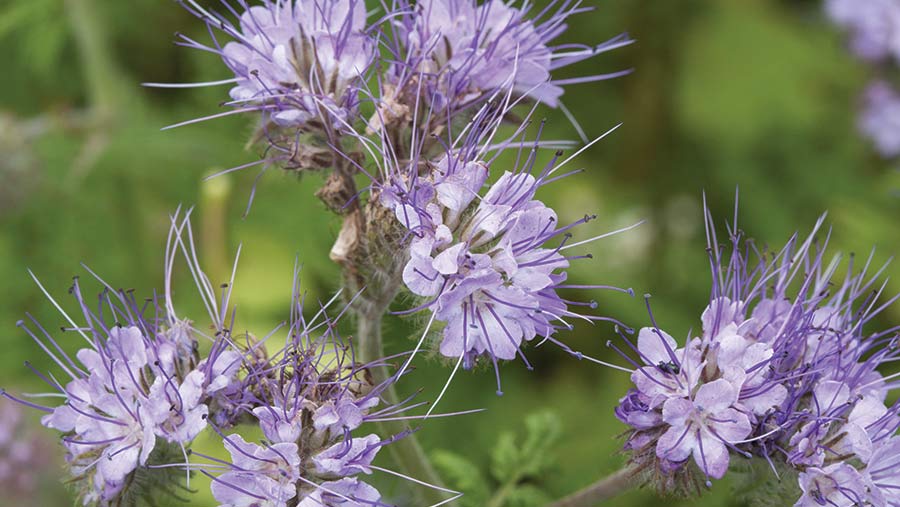 Cover cropping has earned its place in the arable rotation at Freefolk Farms in Hampshire, with stubble turnips being used ahead of spring cropping, bringing many benefits on the thin chalk soils.

Not only does the 50ha provide grazing for the farm’s sheep enterprise and help to fatten lambs, growing stubble turnips also helps the farm to meet some of the obligations of its Higher Tier Countryside Stewardship scheme.

“And there’s always a notable difference with establishing the following spring barley crop where the sheep have been.”

In the right conditions, grazing the turnips allows him to direct drill afterwards, saving time and reducing fuel use.

“If the sheep have grazed them, we can get the same spring barley establishment from drilling directly into the stubble as we can from using a cultivator,” he says.

“This year, the direct operation was twice as quick and saved us around 50 litres/ha of diesel.”

As part of the Monitor Farm programme, he agreed to try some different cover crop options last autumn, with six different mixes being selected and drilled in a field that had previously produced disappointing spring barley yields (see table).

“Soil analysis hadn’t given us any clues to the yield issue, so we were interested to see if different cover crops could help with soil structure and nutrient recycling on these thin, chalk soils, and whether that would result in a yield lift,” he explains.

Drilling took place on 26 August 2017 with the farm’s Horsch Sprinter drill, and all of the mixes were rolled afterwards, with 30kg/ha of nitrogen being applied to each 0.5ha strip.

“They established well,” he recalls. “They were all grazed off with the sheep over the winter and we drilled the following crop of Propino spring barley in the first week of April.”

Some of the spring barley land was cultivated before drilling, with the remainder being direct drilled. “It was very wet, so my hand was forced. The headlands had to be re-drilled two weeks later, as they didn’t establish well.”

That spring barley crop is now being closely monitored so that it can be compared with the rest of the field, which didn’t have the preceding cover crop mixes.

Of particular interest is whether there is a nutrient benefit in the following crop, or if the effects are longer term, and if greater diversity in the mixes adds some resilience and helps to suppress weeds. 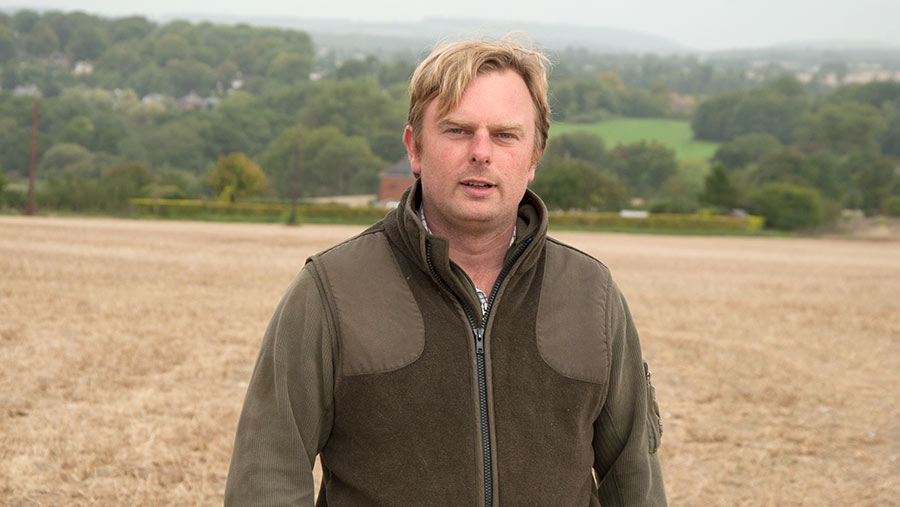 “We have been pulling some of the stubble turnips up to help with blackgrass control, so these mixes might have a role with that.”

The eventual outcome and findings will be shared at his future Monitor Farm meetings, which start again in October 2018.

However, the later-than-normal drilling date means that fertiliser use has already been reduced by 15%, with the barley receiving 120kg/ha of nitrogen rather than its usual 150kg/ha.

It has also had a cheaper herbicide programme, with Foxtrot (fenoxapro) being applied for wild oat control rather than Axial (pinoxaden) plus adjuvant Adigor, while the cost of the T2 fungicide spray has been halved.

“We’ve taken advantage of the cold, slow start to the season by reducing our variable costs,” says Mr Crosbie-Dawson. “That hasn’t just been the case for spring barley: we’ve been able to do that in our winter wheat as well.”

In winter wheat, he has spent £30/ha less on agrochemicals, having not used a T0 spray and saved £20/ha on post-emergence grassweed control.

Cover crops have been an integral part of David Miller’s arable farming system since 2010.

All of his spring cropped land has had cover crops for the past five years – with Wheatsheaf Farming Company also making the move to no-till in that time and putting the emphasis on soil health.

“They are a continuation of our system as we are not moving the soil, so the rooting effect is important for building soil biology,” explains Mr Miller.

“As a result of their contribution, we are making a lot of savings now.” 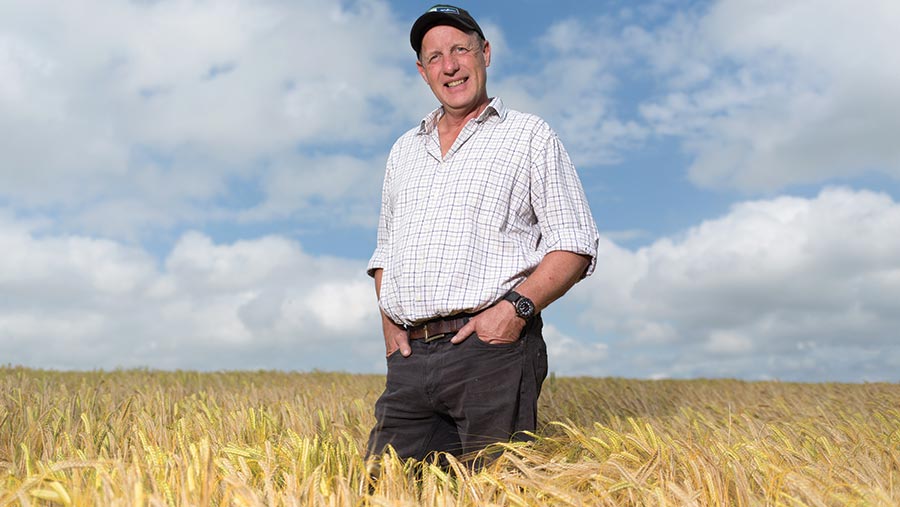 Those savings include nitrogen, which he has been able to reduce by 10%, as well as potash, which hasn’t been applied for the past four years. Instead, di-ammonium phosphate (DAP) is used in the autumn, thanks to a derogation from the Environment Agency for use in a Nitrate Vulnerable Zone (NVZ), with a DAP/urea mix used in the spring.

His diesel use has fallen by 30%, dropping from 85 litres/ha to 60 litres/ha. Slugs were a problem initially, but he now uses ferric phosphate-based slug pellets at drilling and continues to straw rake everything.

“As the system settles and soil health improves, you get more natural predators,” he comments.

Mr Miller has reduced his cover crop seed costs to £20/ha, by buying straights. Where he is growing an early cover crop, he uses a mix of berseem clover, vetch, lupins, phacelia and buckwheat, while his later sown mix is based on spring beans and vetch.

He also follows some basic cover crop rules – with no brassicas being used in the mixes to prevent issues with the farm’s oilseed rape and no cereals included where spring barley is to follow, so that disease and pest carryover is minimised.

George Hosier, who operates a mixed farming system in Wiltshire, has introduced 200ha of cover crops based on a multispecies mix costing £30/ha.

With a beef suckler herd and sheep, he plans to graze all of his cover crops, as he finds that the following crop establishment is better behind grazing.

“It also has the benefit of spreading the cost between two enterprises,” he points out. “The cattle tend to be used on the crops on lighter land.”

His objective with cover crops is to build up soil biology and increase organic matter, with a range of rooting depths being exploited. Another no-till enthusiast, Mr Hosier operates a very diverse and flexible rotation, with oilseed rape being grown only once every 10 years.

“That way, it’s fine to have brassicas in our cover crop mixes. The same applied to peas and beans, which are also grown 10 years apart.” 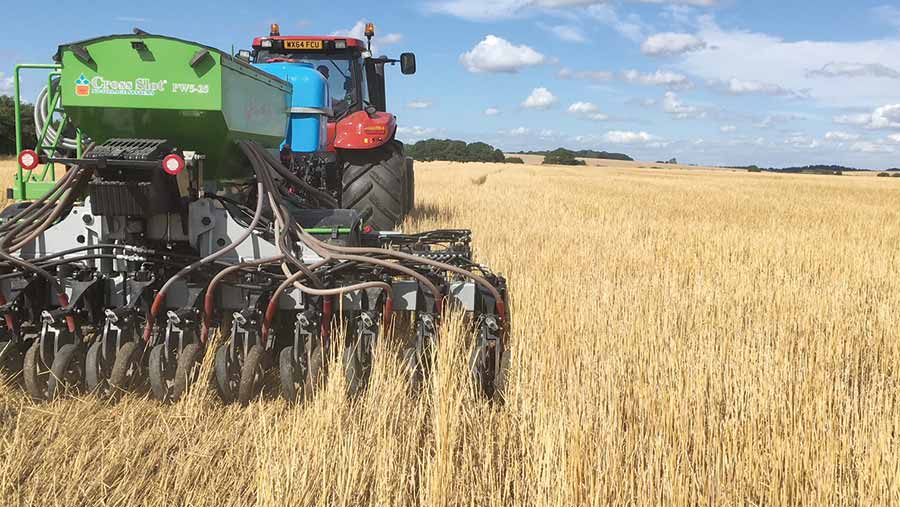 He has also seen significant savings, with nitrogen fertiliser use falling by 10-15% on his wheat and even more on spring barley. No bagged P and K has been applied for the last two years, while seed treatment and insecticide use has also been eliminated.

With a Cross Slot drill, he is able to drill most of his spring barley into the cover crops, which are then terminated after the drilling operation.

“The roots of the cover crop are so important, especially in a wet year,” he says.

He has found that having a legume in a cover crop mix means that the life of the nitrogen in the soil is very short. With other species, the nitrogen benefit is still there a year later.