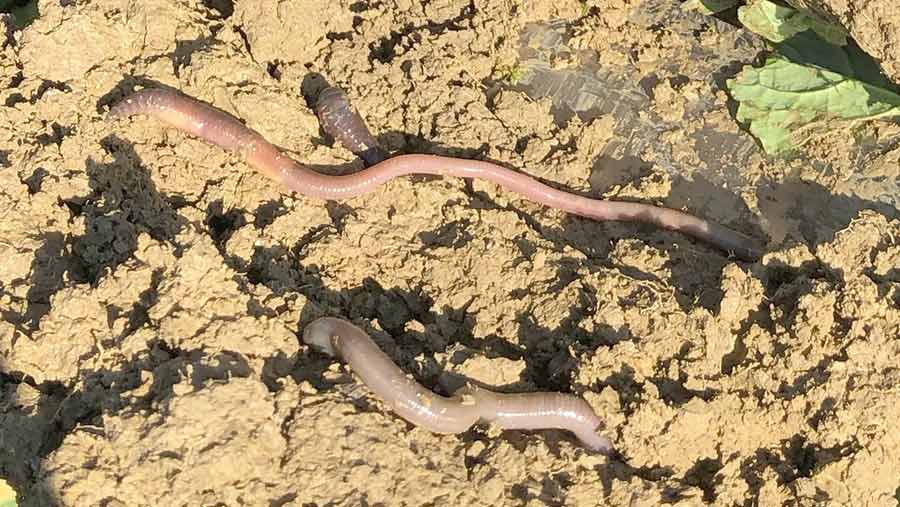 After 10 years of successful cover cropping, Kent grower Guy Eckley has added catch crops to his rotation with the aim of accelerating the benefits to his soil health.

Organic matter levels have increased to 5%, worm counts have nearly tripled and bulk densities and infiltration rates have improved, while yields of milling wheats peaked at 12t/ha last year, on his heavy weald clay soils.

“We are always open to new ideas and this year our focus has been on catch crops,” says Mr Eckley.

They also protect soils from erosion, alleviate drainage issues and lock in nitrogen. 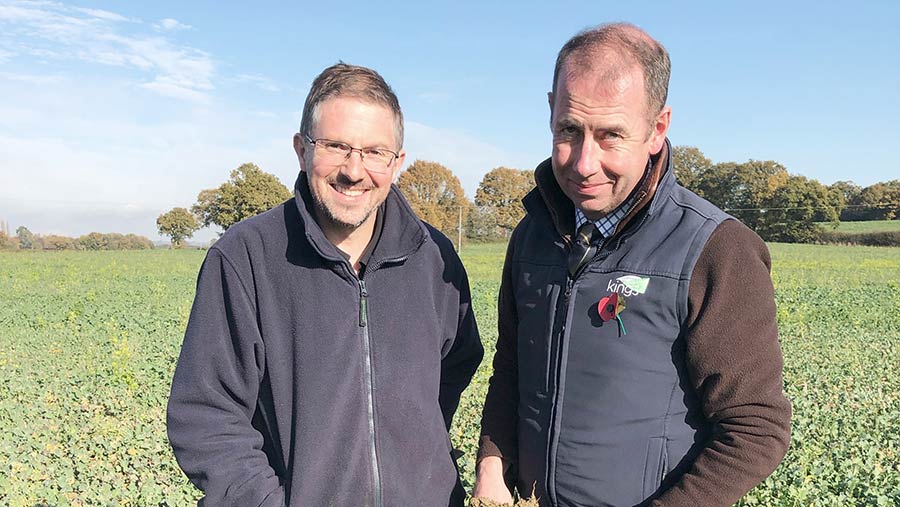 “It’s good to think of the crops like a sponge with a solar panel on it, which captures energy when fields would usually be out of use,” he adds.

Catch crops help accelerate the benefits of cover cropping, which are usually seen after three years of use.

Applications of insecticides and fungicides have been cut at the farm, which is situated on the edge of Staplehurst, with a 40ha block of Edgar milling wheat only receiving one application of chlorothalonil last year.

The crops are drilled as soon as possible after the combine using a Horsch Sprinter modified tine drill with a 65mm-wide cultivator point at a depth of between 2cm and 4cm, ensuring seed is not placed too deep.

“A seed rate of 5kg/ha is used, but rates as low as 2-3kg/ha can work if conditions are good,” advises Mr Barnes.

Early establishment is key for optimum biomass as the crops are only in the ground for six weeks, but this is long enough to provide a leafy knee-high cover and excellent soil nutrition.

“It’s important to gain value from the crops, so timing of sowing is key to maximise efficiency by using temperature, soil moisture and day length to your advantage,” says Mr Eckley.

A 14-way mix is used, including clover, buckwheat, phacelia, linseed, radish, vetch, quinoa and a pinch of mustard. A widely diverse mix can avoid the build-up of soil pathogens.

“When we began cover cropping we used a diverse mix in the theory that we could identify the best plant species.

“However, we found the wider the mix you choose the greater the benefits, due to the range of root structures the different plant families bring,” he explains.

If growers are considering using old seeds for cover cropping that have been stored on farm, it’s important to register the seed for royalties before planting, otherwise this can negatively affect BPS payments.

Catch crops are removed with a glyphosate application at the last minute in order to maximise time in the ground before planting the following crop.

The process is of particular concern if glyphosate is no longer permitted for UK use, as frost and cultural methods such as crimping and rolling are ineffective at destroying catch crops.

Winter wheat covers half of the farm’s arable land, with oilseed rape, beans, peas and barley often used as break crops within the rotation.

However, there is no fixed rotation, as land is sown to crops depending on what fields are capable of achieving.

“We are growing winter wheat, winter barley, winter beans and winter oilseed rape this year, so catch crops are key within the rotation,” he says.

The wet autumn so far has been devastating for UK growers, as waterlogged soils have delayed drillings with machines unable to pass on land without considerable soil damage.

“What that has been drilled has acceptable establishment considering the weather, but you can see every wheel mark in the last block of wheat planted,” he admits.

Mr Eckley is aiming to create a regenerative agricultural system, where soils have resilience to machinery, livestock and weather.

“Creating this system is not easy or simple. We don’t think anyone else has done it before so there’s no one to follow, which means we can go wrong but it’s definitely worth the risks,” he says.

His heavy clay soils are more vulnerable to consolidation, and drainage issues pose threats, which has been particularly testing during this year’s wet autumn.

“The key is to work out where problems lie. We have identified compaction at a depth of 10cm within the soil profile and are looking at ways to reduce this,” he explains.

A mole plough and subsoiler working at a 20cm depth is also being trialled on farm to identify which machine will reduce compaction the most effectively, with benefits from the mole plough recognised already.

The use of a controlled traffic farming system with a 9m combine, 4.5m direct drill and 27m sprayer has also greatly helped minimise compaction, by improving cropping reliability and soil structure.

A mechanical hoe makes a pass via the CTF tracks to remove blackgrass during the spring, with a camera system due to be implemented soon.

Companion crops assist the development of the rapeseed rooting system and quickens establishment. Buckwheat is especially good at fixing phosphate, increasing availability for the oilseed rape.

Flea beetle issues are minimal as soils and crops are healthy.

“We haven’t had much of an issue with flea beetle, there has been some damage but no crop loss,” says Kent grower Guy Eckley.

The combination of companion cropping camouflaging rapeseed crops and the use of delayed drillings to miss infestation windows is expected to have reduced flea beetle damage.

He admitted it could simply be coincidence, but other growers in the area have been suffering with the pest’s destruction of rapeseed crops.

One insecticide application was used to control the pest, but spraying was delayed to ensure an optimum hit and to avoid the destruction of beneficial insects.

Mr Eckley has now upped his oilseed rape area from 70ha to 95ha this year.

The farm also has its own rapeseed press, which runs 24 hours a day, 365 days a year. This produces oil that is sold to Cook, a manufacturer and retailer of frozen ready meals, and is also sold individually under the brand name of “Pure Kent”.

“We have been running the press for three and half years and now aim to put all the rapeseed grown on farm through it,” he says.