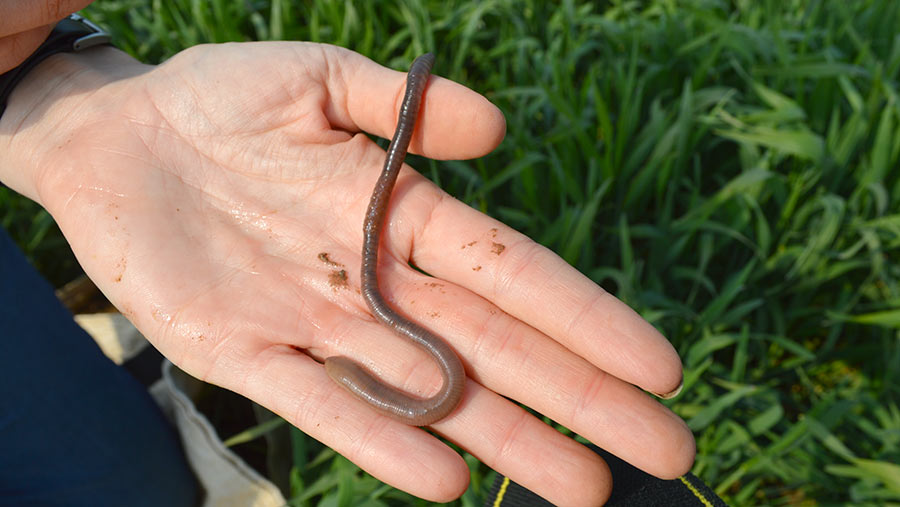 Earthworms are a key measure of soil health, as they can mobilise locked-up minerals, help drainage and spread organic matter to improve soil structure.

Therefore, we travelled to one of the heaviest land farms in Britain, as well as one of the lightest, with a worm expert, to assess what growers there are doing to attract these useful burrowing creatures.

Giving worms an undisturbed habitat with plenty of food is important, so arable farming with minimal soil disturbance, cover crops and plenty of manure applied are all key to encouraging their numbers.

No-tillage and cover crops are two key elements that encourage earthworms, according to two growers who farm on the heaviest and lightest arable soils across Britain.

Ed Ford, farming heavy London clay soils in Essex, has not ploughed for 10 years, and for the past few years has completely adopted a no-tillage regime. He is also growing cover crops to improve his soils.

Together with Jackie Stroud, Rothamsted soil scientist and worm expert, we set out to check on the worm population on his farm to see if he has all three essential worm types. 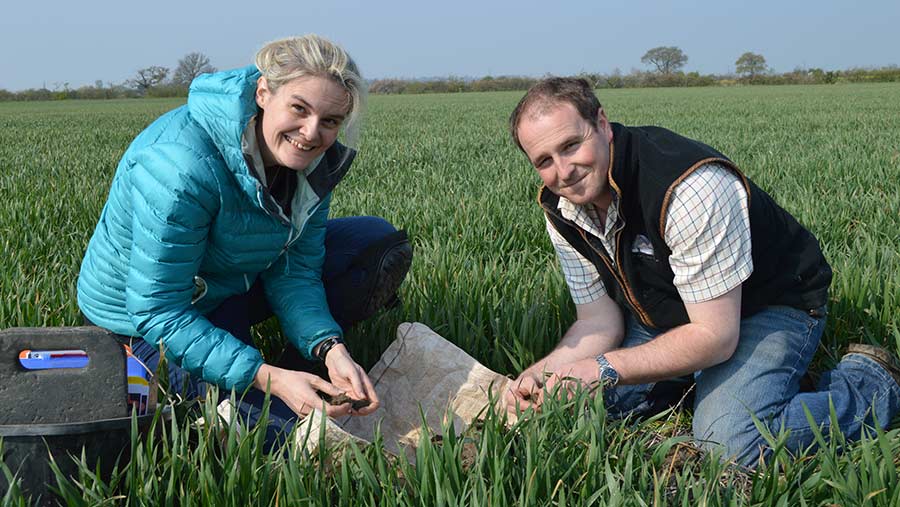 The decision to go down the no-tillage route four to five years ago was made to improve his soils, and the number and types of worms is seen as the ultimate indicator of soil heath.

“We are doing everything we can to encourage worms, and this was the reason for us to adopt no tillage and start growing cover crops,” he says.

Small, bright-red or reddish-brown worms up to 30mm in length. They consume crop remains rapidly and are weak burrowers. They have relatively short lives of two to three years, but reproduce easily, so populations can recover quickly.

These are the most common type of earthworm in the UK. They are pale – pink, grey, green or blue – and can grow up to 100mm. They feed on soils, so can mobilise minerals in the soil by their excretions. They make horizontal burrows, can be found in topsoil down to about 200mm, and have a lifespan of some five years.

Black- or red-headed worms that are longer than 120mm. These feed on organic matter and can be found up to 2m down in soils. They make permanent vertical burrows in soils, so are very useful to improve drainage. They can live for five to 10 years.

The first field we visited on Mr Ford’s family-run Childerditch Farms, near Brentford, was growing Montana milling winter wheat, following Crusoe wheat, which was cut with a stripper header combine, so there was plenty of flattened wheat straw on the ground.

This was the fourth year of no-till and the field had been direct-drilled with a Cross Slot drill into land that was heavy enough that it was called “Three horse field” – as it took three horses to pull a one-furrow plough.

Digging a number of small holes, Dr Stroud found two to six worms in each pit, plenty of middens where worm live and feed, and also plenty of worm eggs or cocoons – which was deemed a good count, considering the dry spring weather.

“Having all three types of worms is a sign of healthy soil – and with all three present, soils can respond to changes such as moving to no-till,” she says.

We moved to a slightly lighter land, sloping field growing spring oats after winter wheat, with a wide-ranging oats/beans/peas/radish/linseed cover crop that had been grown between the two cereals.

The field had been no-tilled for five years and had seen three years of cover crops, so there was plenty of food for the worms.

Dr Stroud says there are a lot of positives from this field – with the no-tillage regime and wide-ranging cover crop mix giving plenty of surface litter to encourage worms.

“Lots of worms lead to a healthy soil, and worms like what a crop likes – such as a neutral soil and no compaction,” she says. 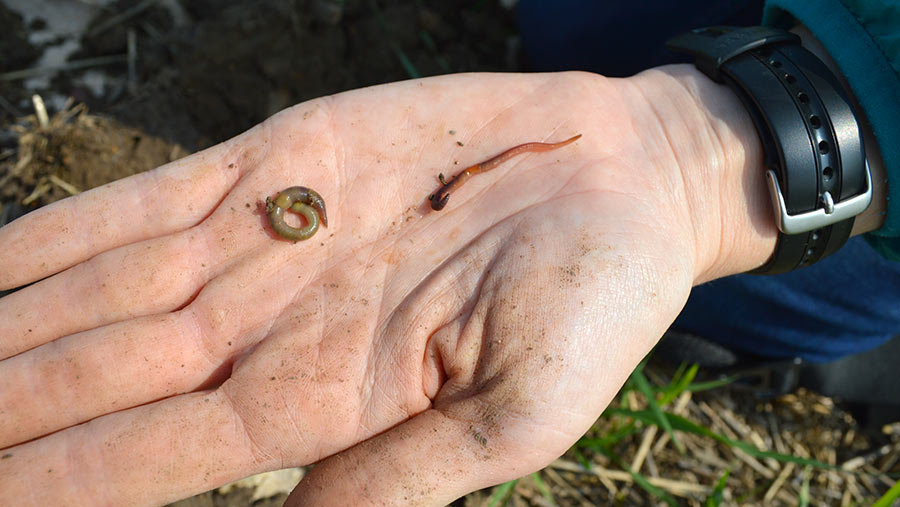 Topsoil worms (left) feed on soils, so can mobilise minerals in the soil by their excretions. Surface worm (right) populations can recover quickly

We then moved north to the southern edge of the Suffolk Brecklands. Rougham Estate Farms, near Bury St Edmunds, has blow-away, sandy soils with inherently low organic matter.

Farm manager Simon Eddell says the estate’s lightest land is north of the A14 trunk road and the arable rotation is dominated by winter rye, chosen for its drought tolerance.

The land here has not been ploughed for six to seven years, and with plenty of manure applied and non-inversion cultivations, the soil organic matter had risen 0.4% over this period. 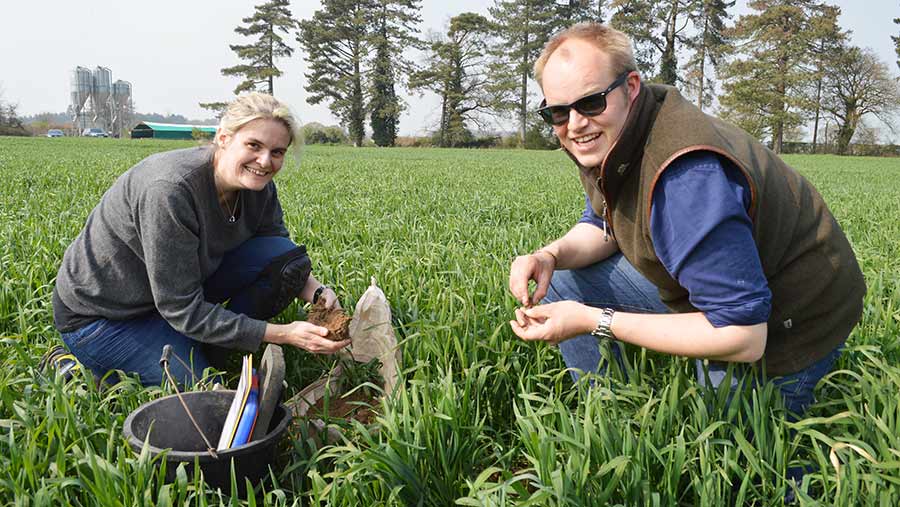 The field we chose was growing winter rye after rye, which had received chicken, pig and cattle muck over the past few years. However, we failed to find any worms, as the very dry weather had likely driven them deep down into the soil.

Another field across the road was growing winter rye after spring barley, which followed sugar beet, and before that, a vetch/oats cover crop grazed by sheep.

It was in this field that we found our first worm. “There has been worm activity here, but they have likely gone deep down in the soil due to the dry weather,” says Dr Stroud.

There were worm castes on the surface and signs of deep-borrowing worms. However, in such dry conditions it was difficult to give an assessment, as we only found the one deep-burrowing worm across six holes dug.

Dr Stroud says last summer’s drought could have hit worm numbers – which may take two to three years to recover – but cocoons survive dry weather and will hatch in the right wet conditions.

“Long term, we are looking to build up resilience with organic matter, and cultivations have certainly been easier, as soils are not capping and blowing,” he says. 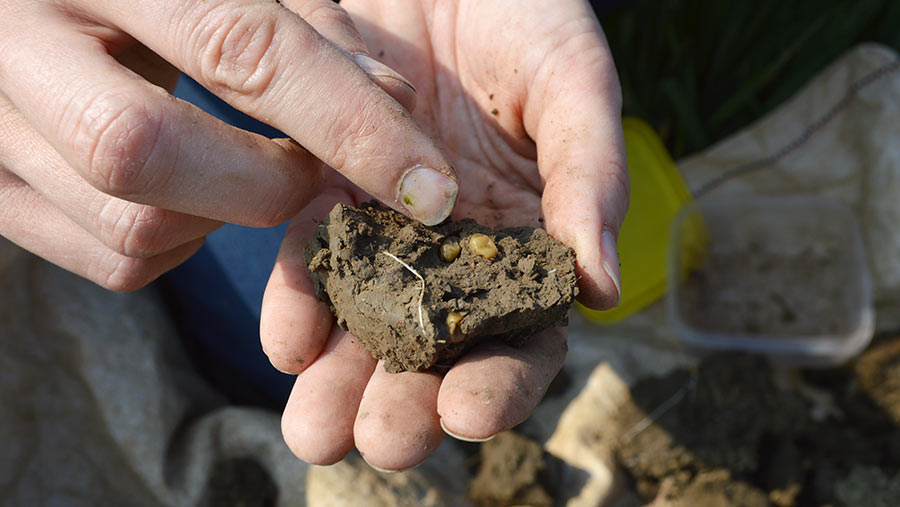 Straw was baled after the rye harvest, but it was returned in terms of manure later, and the better soil structure now meant the ground just needed one pass of the cultivator rather than two before drilling.

Mr Eddell is wary of no-tillage, as his land can slump and it generally needs some aeration before drilling. Dr Stroud says these limited cultivations and the use of cover crops would help worm numbers.

Jackie Stroud is conducting a new worm survey for 2021.  In 2019, #60minworm project, was the first worm survey conducted on farmland and carried out by farmers themselves. In spring 2018, the average field had nine earthworms in every spadeful of soil, with top fields having three times that number.

Some fields showed low numbers of deep-burrowing worms – which was a concern, as these “drainage worms” help water infiltration and combat waterlogging. As they have slow reproduction rates, their numbers recover slowly.

The survey for 2021 is again looking for farmers to upload their worm data so that results can be compared.