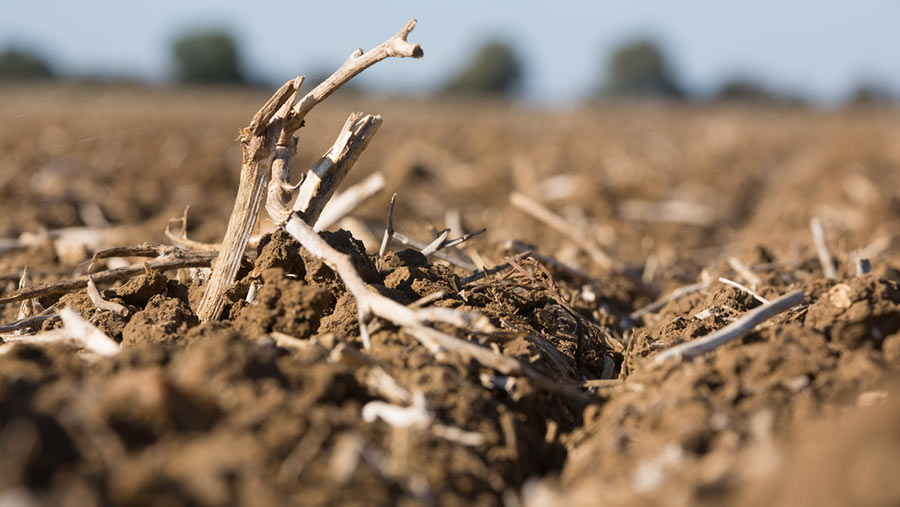 With such a variety of soil types making up one arable farm in the East Midlands, John Miller’s mission to improve soil health and raise yields appears even more complex than the challenge faced by other growers.

Three generations of Mr Miller’s family have been at Manor Farm, in the village of Kelham, just outside Newark-on-Trent, for nearly 80 years.

Crops are grown on an varied mix of soil types, stretching from sandy clay loams with a heavy clay subsoil on the edge of Trent Valley, down to flood-prone but highly fertile silty sands over gravel by the river Trent.

See also: 6 things to consider before drilling your cover crop

While some growers might view farming such an array of contrasting soil types an unwanted complication, Mr Miller says it does bring certain advantages.

“It is good to have a bit of variety in the types of soil we farm. In a dry year it favours the heavier clay land and in a wetter year the freer draining land tends to yield better, so it helps to spread the risks brought by our weather.”

He explains that he tries to tailor his crop rotation to the various soils, getting the best out of the different types without causing damage to soil health or the environment.

“We try to do a cereal crop followed by a break crop and grow maize on the lighter land, with spring beans more on the heavier soils.”

Cultivations are predominantly min-till based, although Mr Miller says some ploughing is done as required to help get on top of a pernicious blackgrass problem.

Because of this, he is moving away from an all-autumn establishment crop rotation, with more spring crops to help with weed control.

Cropping is not the only farm practice he is challenging, however.

Soil health, in particular organic matter levels, is a major concern for Mr Miller and is something that he wants to look closely at during the three years of a new Monitor Farm project with the AHDB.

He is worried about the vitality of his soils and their ability to support good yields moving forward. Last year, winter wheat averaged 10.2t/ha, but the longer-term average for the farm is about 9t/ha.

“The fear is that yields are plateauing and we should be doing something about that.”

“Soils are at the forefront of people’s minds now and really we shouldn’t have ever taken our eyes off of soil health,” he says.

Mr Miller is in a part of the UK that traditionally saw a lot of mixed farming enterprises, but the last few decades have seen many units move away from this and Manor Farm is no exception.

Up until 1983 the farm had about 100 Ayrshire dairy cows, with a suckler herd taking the total head of cattle up to about 400.

The farm, then about 400ha, was roughly split equally been grassland and arable land. Since the herd was sold, Manor Farm has been purely arable and has expanded to about 685ha.

Despite the known benefits of a mixed farming system, Mr Miller says he won’t be bringing farming livestock back  to Manor Farm.

“You’ve got to want to farm with livestock and I don’t want to. I also don’t need to because I get as much muck as I like from a local beef unit.”

About 5,000t of farmyard manure comes on to the farm each year to help improve soil organic matter content.

For the last five years Mr Miller has been spreading manure at up to 41t/ha, which is the maximum allowed as he is in a nitrate vulnerable zone (NVZ).

He also lets a local farmer’s sheep on to graze stubble turnips overwinter in certain fields, giving additional livestock farming benefits, without having to be a true mixed farmer.

At harvest, straw is chopped and spread behind the combine to retain P and K and help raise organic matter levels further.

Now Mr Miller is looking at cover crops to get good a soil structure going overwinter. He has already experimented with drilling mustard on about 16ha of sand land before potatoes, which was ploughed in as a green manure.

Moving forward he aims to trial cover cropping as a Monitor Farm, possibly using phacelia and home-saved oats, and will also look at a range of establishment methods including direct drilling to help control blackgrass.