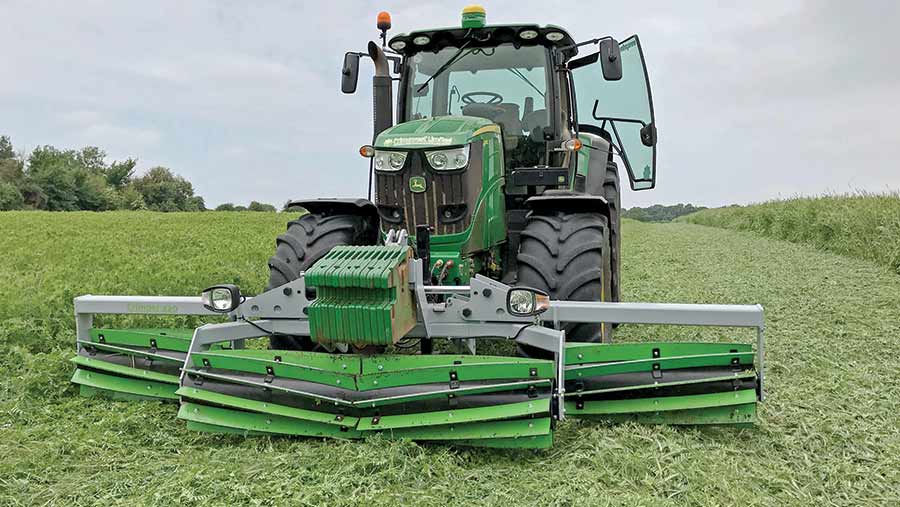 The holy grail of crimping is for cover crops to slowly die into a weed-supressing mat, covering the soil without the use of chemical sprays or the plough.

For an organic grower, this would allow wheat crops to be direct-drilled after nitrogen-producing cover crops, improving soil health while minimising diesel bills.

It could have wider benefits for conventional no-till farmers, especially if glyphosate were to be banned.

While many UK growers remain sceptical of the practice, one organic grower from Oxfordshire is determined to get the kit to work this season.

Watch the video and read the report below:

James Alexander is trialling a crimper roller on the cover crops growing on his 323ha organic farm near Chipping Norton, with the hope that he will be direct-drilling cereals on the farm within three years.

But he faces several difficulties in achieving that aim. The first challenge is finding the right design for the crimper roller.

As the owner of cross-slot direct-drill manufacturer Primewest, he has chosen to design his own crimper based on plans available from the Rodale Institute in Pennsylvania, USA, rather than rely on the offerings already on the market in the UK. 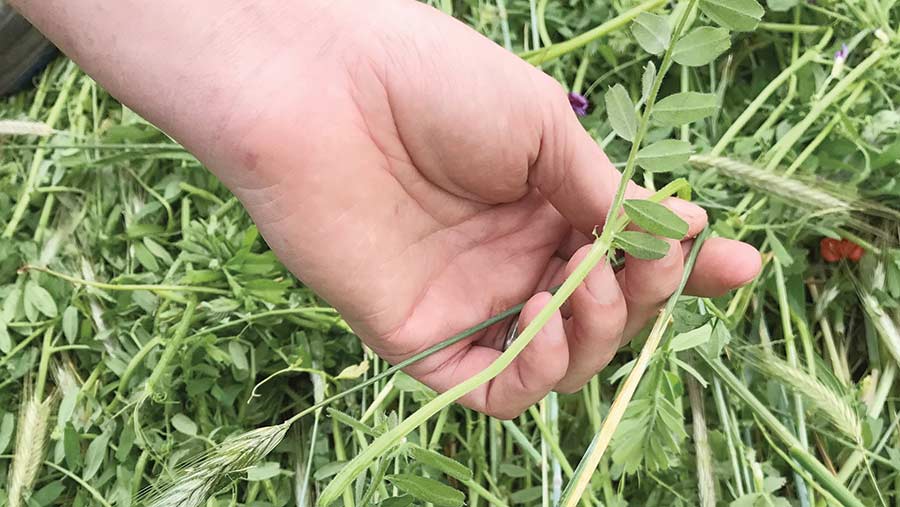 Rye and vetch after crimping

The institute’s plans, which are not patented, use bars fitted in a chevron pattern across the roller to crush the crop.

Attaching curved blades in this pattern means there is always a point of contact and consistent pressure being applied to the ground, unlike designs based on straight bars, as these encourage bounce.

Mr Alexander says poorly thought-out design, rather than the process itself, is the reason for crimping’s bad reputation in the industry, leading many growers to doubt that it is actually capable of working.

But crimping is a regular practice in the US.

“The ones used in the US are often this shape; it just took a bit of engineering and thinking about,” Mr Alexander says.

Each blade bolts on to the chassis individually to allow for easy replacement – handy on stony Cotswold soils.

Unlike in the US, the UK is not blessed with a guaranteed summer.

If temperatures were consistently hot, then crimped plants would almost certainly die. But in the UK there is always the risk that unseasonably mild weather and rain will encourage regrowth. 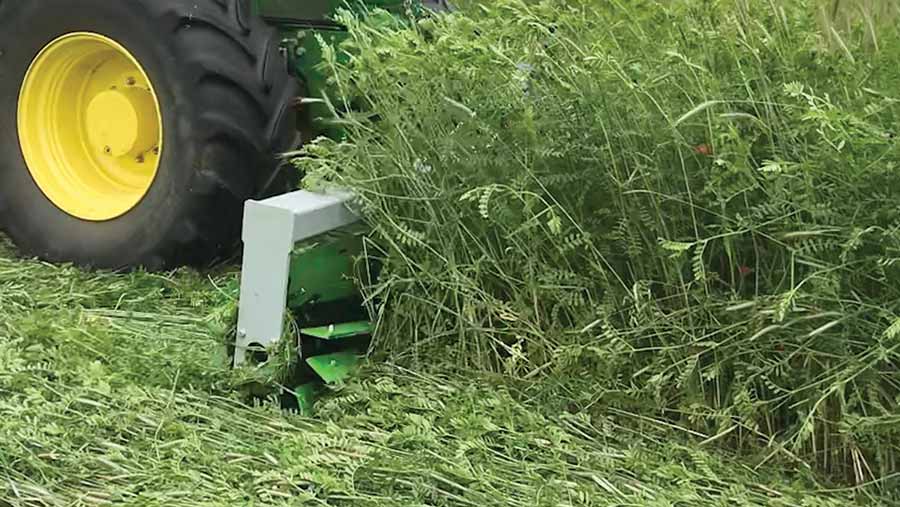 The crimping roller at work

Instead, to successfully crimp a cover crop on UK soils, Mr Alexander thinks timing is everything.

Ideally the crop should be flowering before being crimped, but finding this stage is complicated because UK growers typically opt for a mix of species in their cover crop.

In the US growers predominantly opt for single crops of rye, with one flowering time.

But the UK has followed France’s example of favouring a mix of species to protect against complete crop failures.

In the past Mr Alexander has grown vetch and oats as his nitrogen capturing cover crop within his rotation, but found that oats can be crimped, mowed and disced and still grow back.

So instead this season he is trying a mixture of rye and vetch for the first time, in the hope that rye will prove to be as easy to crimp in the UK as it has in the US.

“If you are trying to use a crimper I would only recommend using one, maybe two species. One idea could be to use a mixture with a few species which would be taken out by frost to leave just two for crimping,” he says.

Vetch usually starts flowering on Mr Alexander’s farm around the time of the Cereals event in mid-June.

Normally as soon as most of the crop is in flower he would go in and cut the top off with a mower to prevent it from setting seed and contaminating the following wheat crop.

While some farmers struggle to grow a decent crop of vetch, Mr Alexander has no such problems, growing a “stonking” crop which is so big and bushy that it out-competes any weeds.

It is normally so big that it is impossible to cut with a mower in just one pass without stalling the tractor. Instead he sets the mower as high as possible to take half out before returning 10 days later to mow the rest.

It is then disced to ensure it is completely killed, then left over the summer and ploughed at the end of August or beginning of September ready for wheat.

This season, while the cover crops established well, they were not looking good in the wet and cold conditions of February, lacking both bulk and height.

Since then the crop has gained ground, and stood at more than 5ft at the start of June.

His first experimental attempt at crimping at the beginning of May failed, proving to be just too early as the crop has since grown back.

“It was far too early. We left it 10 days and if had even sort of died we would have carried on crimping, but it didn’t,” he says. 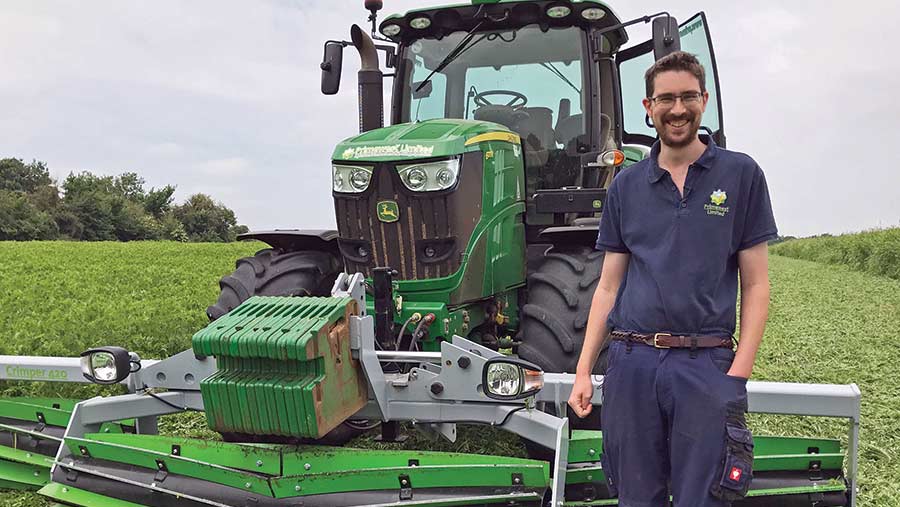 When he next had an attempt, at the start of June, the vetch was starting to flower, but rye grains were still running clear when crushed rather than being milky, which is the ideal stage for crimping.

If the crop is crimped at the ideal time the roller will crush the stem rather than cut it, limiting the amount of water left in the crushed sections and effectively making the plant kill itself, as it carries on growing and runs out of water.

Mr Alexander thinks it should take a week to 10 days for the crop to die, depending on the weather, but after 10 days the results were mixed.

Despite expectations, the rye completely died off while some of the vetch has started to grow back, indicating that for successful crimping vetch must be in full flower, which this season was around mid-June.

If the sweet spot can be found for crimping then next year Mr Alexander plans to direct drill a second cover crop through the weed-suppressing mat formed by the crimping.

“If we can get the mix right, and get it laid right, then we will put another cover crop in which will do even more good by keeping any nitrogen produced by the vetch from leaching out of the soil over the summer,” he says.

This would probably be spring beans, buckwheat or mustard, direct drilled three to four days after crimping.

Winter wheat would then be direct drilled into these non-frost hardy varieties, leaving the weather to do the job of removing the cover crop.

Mr Alexander already has plans for how to improve the design of the roller, which he hopes to have ready for next season.

He plans to move the roller from being front-mounted to trailed, as this would allow the crimper to be made wider and heavier for better crimping.

It would also distribute the weight across the crimper better, as currently there is some spring-back at the edge of the roller.