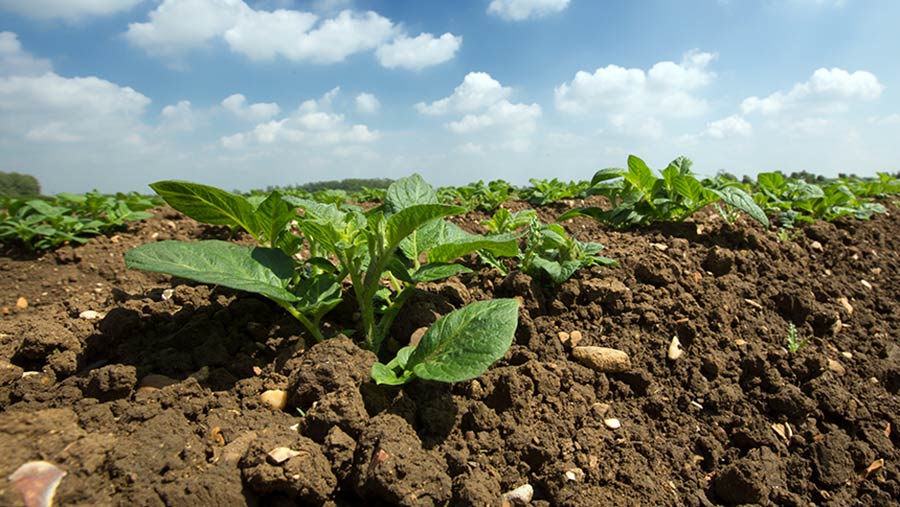 Biofumigation is the process of fumigating soil with gas from a biological source, such as a cover crop.

“Biofumigation arises from distruption of the tissues. When we break the tissues, the glucosinolate molecules, which are sugar rich molecules, are cleaved by an enzyme known as myrosinase,” explains Mr Watts.

“The myrosinase splits the sugar from the glucosinolate and the remaining glucosinolate structure, which is made up of nitrogen and sulphur, rearranges into something slightly more stable but still volatile, known as isothiocyanate.”

The natural isothiocyanate gas released from the broken plant material is toxic to PCN, reducing the viability of nematode eggs.

Watch the AHDB Potatoes video below for the key findings to help maximise biofumigation efficacy.

Mr Watts says the right time to be incorporating a biofumigant crop is around mid-October and plants need to be hitting the budding to the early flowering growth stages for the best gas release.

“The reason that this growth stage is preferable is because we are currently limited by what is out there in terms of the machinery that we can use,” he explains

Once plants reach the mid-flowering stage they become more woody and that means they are tough to break up with a topper.

“Plants might have a higher biomass and a higher glucosinolate concentration at that time but it’s not going to be as easy to break apart,” notes Mr Watts.

When it comes to actually macerating and incorporating the biofumigant crops into the soil, the investigation found that using one tractor with a Haulm topper, rotavator and cage roller to chop, mix and roll in a single pass was best.

The main advantage of this is so that the plants are cut and incorporated all within 10 seconds, which is crucial, bearing in mind that the volatile biofumigant gases don’t stick around for very long.

A rotavator with bed-loosening tines was teamed with a cage roller to seal in the residue working at 300mm depth, but Mr Watts suggests that a powered smear roller would do an even better job.

The type of topper tine used was also looked at, with knife and “V” tines giving a good chop, while the wider-faced pigtail tine tended to chop and crush and hammer tines gave the plant matter a good bruising.

Mr Watts suggested that using a combination of different topper tines would give best maceration for good biofumigant gas release.

Go to the AHDB Potatoes website for more information on the SPot Farms research programme.