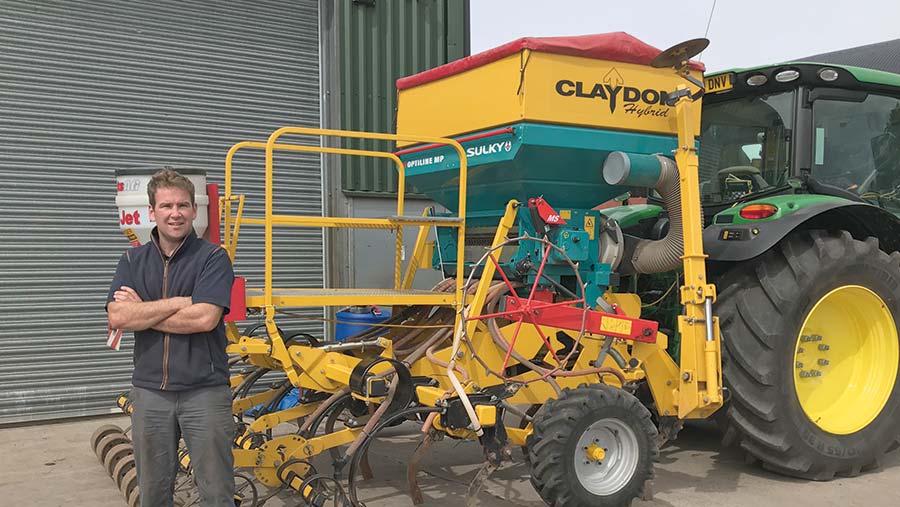 A Shropshire grower has achieved major reductions to both his fuel bill and horsepower requirements by switching to strip-till, growing cover crops and introducing sheep to his rotation.

In the five years since farm manager Michael Kavanagh took over the management of Church Farm and switched to a Claydon drill, the fuel needed to drill his crops has reduced from 13.5 litres/ha to just 6.5 litres/ha.

“In the first year, the 210hp tractor was on its knees and only doing about 10km/hour,” says Mr Kavanagh.

In addition to a much reduced fuel bill, the improvement to Mr Kavanagh’s soils has allowed him to seriously cut his chemical spend.

The switch was prompted by the retirement of the farm’s tractor driver, meaning Mr Kavanagh needed to be able to establish his crops by himself, but also the farm’s history of growing vegetables and potatoes, which had left the soils in poor condition.

“The farm was previously farmed by contractors who ploughed and worked the soil pretty hard.

“I was lucky that when I took over there was pretty much a blank canvas. The farm needed the reset button.”

Initially, the sandy loam soils, which were lacking in organic matter and body, would cap really easily, going rock hard or slumping, with no visible signs of worms or life.

After five years of moving the soil less, Mr Kavanagh says worms are evident all across the farm and yields have continually increased, achieving 8.9t/ha for milling wheat last season despite the drought.

As the land is not typically high-yielding and is drought-prone, he aims to achieve premiums, growing milling wheat, oilseed rape, winter oats, spring barley, and for the first time this season, quinoa (see “Replacing spring barley with quinoa”).

The rotation is not fixed, being guided instead by market, soil health and the previous crop.

Yields from the 2019 harvest look good, he says, with good proteins despite many growers struggling to achieve the necessary level.

“One thing we have really noticed with this system is that in the early years we were getting fairly low yields and low proteins, but as the soils have improved, we have consistently achieved the proteins.”

Mr Kavanagh has also made a significant saving on lime since moving to no-till, as previously the farm required significant amounts every four years.

A mixture of cattle manure, chicken litter and fibrophos, which is made from chicken litter, were added to the soils when the farm first went to strip-till, as testing revealed indices of just one and twos for phosphorous and potassium.

Testing of the soil last year revealed the farm required no lime, and phosphorous and potassium levels were where they should be despite not adding any bagged P or K for four years. 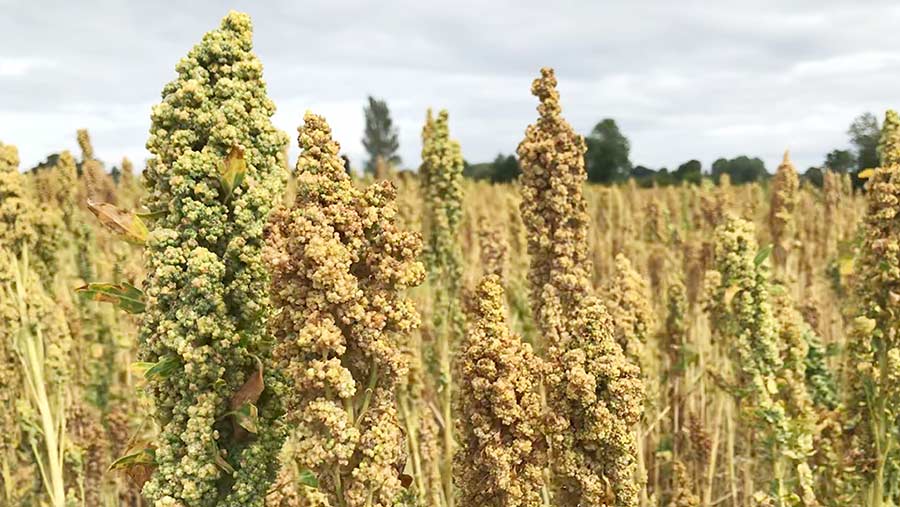 However, Mr Kavanagh the Claydon is only part of the jigsaw puzzle, with cover crops and the introduction of sheep also playing their parts in improving soil health on the farm.

Alongside the 200ha of arable cropping, he also has 500 ewes, which were introduced early on when the farm needed a lot of investment, as sheep can be started quite cheaply and pay back relatively quickly, with lambs being sold through a local farm shop.

The farm has some permanent pasture and the soil type of the arable land lends itself to outwintering sheep.

A 10-species cover crop is grown before all spring crops for the soil, but also provides grazing for the sheep overwinter.

“The usefulness of the sheep should not be underestimated.

“The cover crop turns out to be fantastic for the sheep, but you have to be a bit careful as it can be too good,” he says.

Although Mr Kavanagh is achieving good results and savings with his Claydon drill, he will be switching to a John Deere 750a from next year after carrying out trials with zero-till this year.

“When we entered the trial area, the combine meter shot up massively; the farm is ready for it,” he says.

“I want to accelerate the soil health benefits and the reduction in herbicide use will be a big advantage, too.”

Reducing herbicide use fits with Mr Kavanagh’s overall strategy of reducing chemical pesticide use across the farm, which has only been able to become an ambition since soil health improved.

He has been working with his agronomist, Nick Woodyatt from Edephos Agronomy, to ensure his crops receive the correct nutrition to fight disease.

“Nick tells me how fungicides and plant growth regulators thin cell walls and weaken the plant, which creates a vicious circle because then you have to spray more.”

Mr Kavanagh has not used insecticides for four years, and this year the wheat did not have any seed dressings, and didn’t receive any plant growth regulator.

Apart from a single application of Amistar (azoxystrobin) at T2.5 on the wheat, after low levels of yellow rust where found, he has also stopped using fungicides, instead relying on a full programme of foliar nutrition to fight disease.

“Part of it is to do with increasing margins, but also we are losing chemicals hand over fist, and we want to be on the front foot.

“This is the first year we have thrown it out on a big scale.”

Silicon has become a big part of Mr Kavanagh’s programme, as it strengthens the cell wall and stiffens straw, making it less likely to lodge.

Three applications – one in the autumn, one at T0 and again at T1 – have allowed him to completely stop using growth regulators.

In addition to the full programme of nutrition, which is based on regular tissue testing, Mr Kavanagh also uses biology at the key T3 timing against septoria by brewing up and applying Bacillus subtilis.

Mr Kavanagh also believes that feeding the microbes in his soil has helped to ensure that brome, which can become an issue when using a strip-till system, is at its lowest levels ever.

“Grassweeds were a significant problem. Brome likes a 70% bacterial soil, but fungicides and all inversion tillage kills off fungus, and makes it more friendly to grassweeds,” he says.

“This year is the cleanest I’ve ever had the farm. I don’t know for definite but I think the fungal and bacteria balance is better.”

Mr Kavanagh always grows a companion crop of burseem clover with his OSR to host his mycorrhizal fungi to ensure levels do not drop.

He is also trialling using his sheep to naturally suppress disease in the crops.

A 4ha field was drilled with wheat on 10 August, along with a companion crop of white clover, which will be grazed by the flock of sheep until November, with the theory being that the sheep will graze off any disease.

Then the crop will be allowed to grow, and should tiller well, while the clover is fixing nitrogen and smothering weeds.

“The worst-case scenario is that less than one tonne of seed will be gone out of the shed and we will have to re-drill in November,” he says.

With the reduction in fungicide sprays and all Barrel and Zyatt wheat seed being home-saved, Mr Kavanagh has been able to cut back on his fungicide programme, which was costing £100-£110/ha to just £60/ha this year.

He is pretty confident this can be trimmed even further in the future by cutting out Amistar completely, and believes there is far more potential to be uncovered and unearthed for using biology to fight disease.

The spring crop, which is sold for human consumption in the UK, has the potential to produce a good margin, especially as it is quite drought tolerant.

“This land is very drought prone, and for the past couple of years it has been bad for spring barley, so it is a crop to hedge our bets,” he says.

A 10-species cover crop is grazed by sheep over the winter before being taken out by glyphosate in the spring, allowing the quinoa crop to be zero-till drilled in early April.

The crop receives 60kg/ha of nitrogen in the seed-bed, followed by another 90kg/ha after it has emerged.

Quinoa also fits well into his ambition of reducing chemical use as there are no herbicides or insecticides approved for use in the crop, with downy mildew the only problem that can be dealt with, using phosphite.