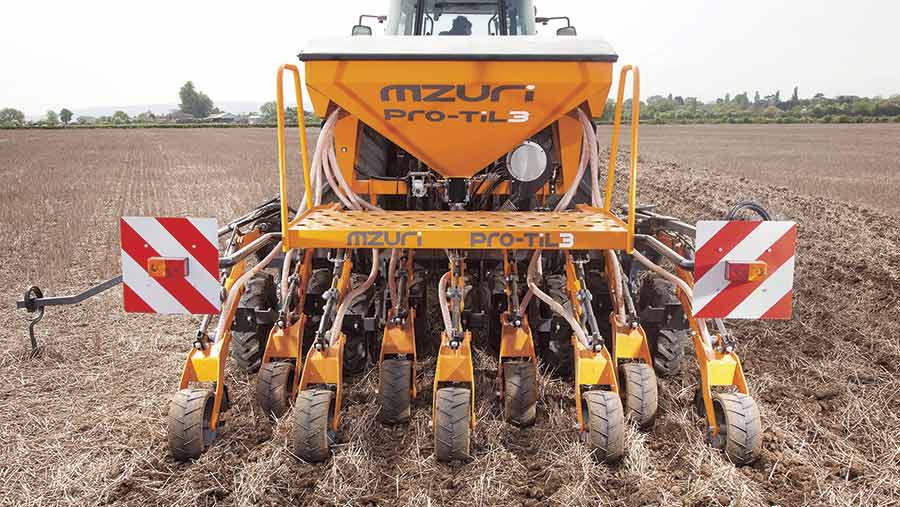 Strip tillage offers farmers the best of both worlds – a tilled strip offering a good tilth moist, friable, well-draining seed-bed along with some of the benefits of zero tillage. Louise Impey catches up with a farmer contractor seeing the benefits.

Strip tillage plays an important role in the cultivations policy on a Bedfordshire farm and contracting business, where it is used across a significant amount of the 1,500ha of cropping.

Now in his fifth season with a Mzuri Pro-Til 4 drill, grower Philip Woods uses it to establish oilseed rape, winter beans and linseed, as well as for most of his spring drilling. Winter wheat crops going in behind linseed and beans also work well.

The low-disturbance, targeted tillage practice, which only cultivates a narrow band of soil and retains crop residues, has been successful in most situations.

It helps contribute to better soil health, lower establishment costs and the expansion of the contracting side of his business.

As well as moving less soil, Mr Woods has been taking other steps to improve soil structure and raise soil organic matter levels.

The farm’s rotation has been stretched, while the use of compost after harvest and the fitting of low-ground-pressure tyres and rubber tracks to the farm’s machinery are also helping.

Looking ahead, bringing sheep into the arable rotation at DH Woods & Son is being considered, with Mr Wood’s son, David, looking into the soil fertility benefits and practical requirements.

“There’s no doubt that our soils have become resilient and are more load-bearing now,” says Mr Woods.

“Leaving them alone and letting them recover is working. We never see puddles anymore, earthworm numbers are high and infiltration rates have really improved, even on our heaviest land.”

Having a one-man, one-operation drilling and cultivating system has simplified management and increased output across the five farms he is involved with, also allowing accurate placement of the seed and helping with pest and weed control.

“We’re still learning, but the drill suits the way that we farm here and only cultivates a narrow strip of soil, leaving the remainder undisturbed,” he says.

“We change coulters for different crops – our oilseed rape is drilled in very narrow one-inch bands but, with wheat, we use the wider 4.5-inch coulter.”

He also uses a straw rake after the combine and in front of the drill, to make sure that the residue is spread evenly and doesn’t affect the following crop establishment.

“Chaff is just too light to spread across 12m, and where it forms lines, it can encourage slugs and lock up nitrogen.”

Farming 344ha from his family farm base at Lynchfield Corner Farm in Kensworth, as well as a further 1,150ha on four other adjoining farms as PR Farming, Mr Woods points out that maintaining some flexibility in the system is important, as conditions are key to its success and his customers may have particular requirements.

“Using one drill for all of the crops, across all of the farms with a range of soil types, isn’t possible. What works on one farm might not suit another, especially if it is very wet or there is a grassweed challenge.

“Doing things in the same way every year isn’t always a good idea either. Having a cultivations rotation, as well as a crop rotation, seems like a sensible precaution. The pesticide options available to us are shrinking.”

For this reason, he will use preparatory passes if necessary and make good use of stale seed-beds, especially after oilseed rape, to deal with volunteers and blackgrass.

“Wheat crops can struggle after rape if we only do one scratch in July, so we plan to take out two flushes of weeds before drilling and produce a very firm seed-bed, so that slug damage is limited. In the same way, we have to lightly cultivate after hybrid barley, or else it germinates in the following rape crop.”

With wheat after beans or linseed, however, it’s a very different approach. “In that situation, as soon as the beans or linseed are off, we turn round and do a shallow scratch, before strip drilling straight into that.”

Oilseed rape establishment with the Mzuri drill is straightforward and crops get off to a flying start, helped by some di-ammonium phosphate fertiliser, which is placed under the seed.

With over 280ha of oilseed rape to get in the ground, it takes around 12 days to complete the operation, which starts in the first week of August.

“It’s warmer then, so we can see cotyledons within 24 to 48 hours,” says Mr Woods. “We get slug pellets down the same day, so that it grows away unchecked.”

Broad-leaved weed numbers in the rapeseed are lower, as most of the soil is not being disturbed, so a pre-emergence herbicide is not necessary.

Slug pellet use has also been reduced, while companion crops are being investigated, with some berseem clover being drilled in one area of the rape.

“We do get [cabbage stem] flea beetle, so rapid establishment is essential. There’s a range of drilling dates across the farms, which adds to the challenge.”

Spring crops are drilled a bit later than they would be with a conventional drilling system, so that the soil has time to dry out and warm up, he reveals.

“You have to be patient in the spring and be prepared to go later. Moving the soil dries it out, so if that’s not taking place you have to react accordingly.”

The upside is that spring crop establishment doesn’t suffer in a dry year. “You never need a good rainfall event with a Mzuri. The residue conserves soil moisture, and also protects it from erosion and supplying organic matter.”

A whole-farm approach to improving operations is in place, with efforts to raise yields and improve efficiencies working alongside soil and environment protection.

As such, ploughing was abandoned back in 2000, when Mr Woods moved to non-inversion tillage and a cultivator drill, before progressing on to strip tillage in 2011/12.

“As our soils continue to improve and re-structure naturally, there may be scope to use an even lower disturbance disc drill for our rape establishment,” says Mr Woods.

“Soils have to be in the right condition for it to work, so we will monitor our progress and look for ways to keep moving forwards,” he says.

Establishment system at a glance