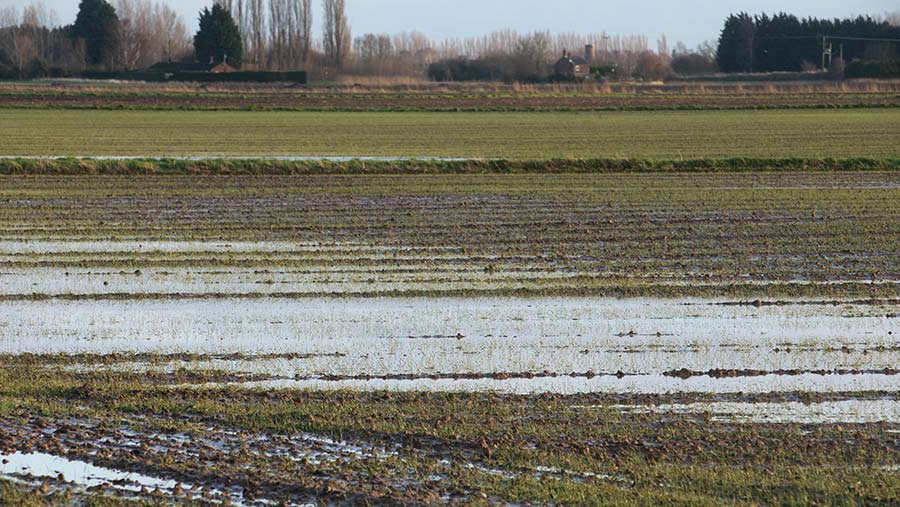 Following months of wet weather and widespread flooding on farms, Adas is advising growers to focus on sampling for soil nitrogen supply (SNS).

Pete Berry, Adas head of crop physiology, tells Farmers Weekly: “It’s going to be more important than ever to measure the soil for its N content and SMN content this year. In our trial areas across the country,  the SMN data is lower than we have ever seen before.”

Coupled with the heavy rainfall, high-yielding crops last harvest – especially wheats – will have taken up more soil residues than what would usually be left for the following crops.

Dr Berry emphasises the need to test soils further down the profile – between 60cm and 90cm – this season, especially with all the increased risk of leaching following months of wet weather.

But he warns that there is no point testing soils in fields that were still flooded, as samples would be compromised. “You’ve got to let fields dry out before you can really make an assessment.”

And for growers who took advantage of a break in the weather and already applied N fertiliser to crops in late January/early February, sampling soils now will not return an accurate reading.

Adas principal soil scientist John Williams says: “It would be a good idea to carry out a full assessment of the condition of flooded soils.

“There is likely to have been some sediment deposition which may affect the topsoil P, K, Mg nutrient content, so sampling would be a good idea.

“Other things to think about would be soil structural condition – it’s likely that the aggregates will have collapsed and cultivations may need to be adapted.”

Ross Leadbeater, business manager for CF Fertilisers, says there are a lot of small crops coming out of the winter period with very little nitrogen available in the topsoil profile.

“I would recommend a little-and-often approach to N inputs to mitigate losses, especially up to growth stage 30, to make sure you are getting optimum tiller numbers in wheat crops,” he says.

“You need to have soil temperatures of at least 5C to be able to see crop growth, and they are only just getting there at this moment in time.

“You certainly don’t want to be putting 100kg/ha of N on at the moment. The crop will not be able to utilise it at this early growth stage and a little-plus-often approach will be key to optimum use efficiency this season.”

Mr Leadbeater says growers should also take into consideration any N that will become available during the season from organic manure applications per drilling.

Adas says growers should contact their locals agronomists/advisers for advice on who can carry out soil sampling or testing.

David Hoyles says he usually carries out soil sampling in mid- to late February to give him an indication whether he needs to increase or decrease his N fertiliser applications.

This week, he has been taking SMN core samples at 0-30cm, 30-60cm and 60-90cm to get reliable estimates of available nitrate and ammonium after the winter rainfall and previous cropping.

Mr Hoyles has not received the results, but expects he will have to up his N fertiliser rates this spring as soil nitrogen supply levels appear to be low.

“Doing the samples removes the guesswork and tells me what is and what is not around for the spring growth that is about to occur,” he says.

“It allows me to adjust my fertiliser rates accordingly, and is a more sustainable approach.”

Despite all the rain, Mr Hoyles says winter wheat crops that have established well and “appear to be quite green and in good condition” on his farm, bordering The Wash in south-east Lincolnshire.