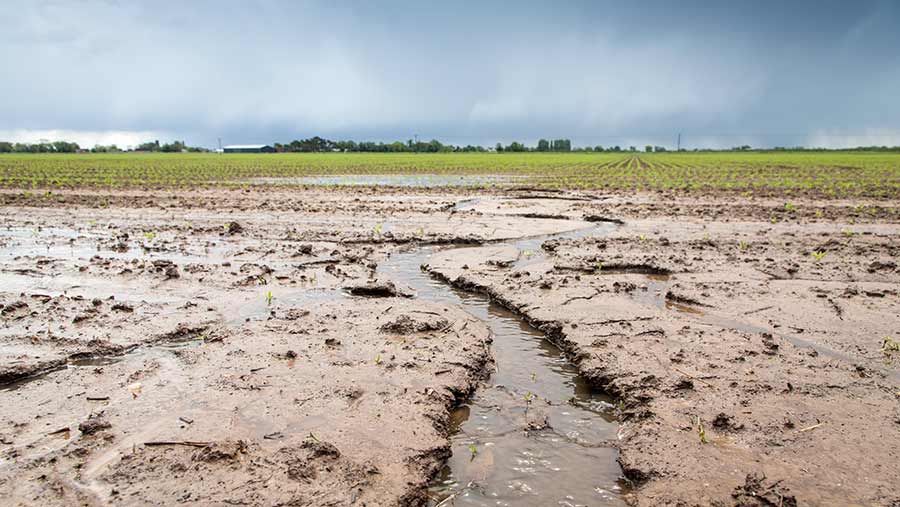 Soil erosion is a natural process that can be slow and continue virtually unnoticed or may occur at an alarming rate and involve huge amounts of soil being lost from fields.

On farmland, it mainly happens because of the natural forces of water and wind, although it can be caused and accelerated by tillage practices.

The problems related to soil erosion are twofold – environmental and economic – and pressures are mounting on the industry to introduce measures to stop soil movement. With future policy set to reward good soil management and pay for public goods, it’s worth making changes for the better.

For growers wondering where to start, soil-friendly farming has been the focus of work done at the Allerton Project – the Game and Wildlife Conservation Trust’s farm at Loddington in Leicestershire – for a number of years, with benefits to both cropping and the environment being recorded.

“Soil loss is a fact of life,” says Alastair Leake, director of policy and head of the Allerton Project.

“We can’t stop it happening completely, but there are things that can be done to reduce it significantly. Both the movement of soil and its deposition are challenges.”

Where soil has been loosened by cultivations, especially on a slope, it becomes vulnerable, he points out. “It is possible to manage the soil in the field to stop it moving, either through tillage or soil structure, or both.

“Soil biology is also important, as it plays a major role in improving soil function.”

Where water is the main cause of soil erosion, tillage method and direction in relation to the slope are important, while reducing cultivations will also help as it encourages earthworm numbers.

“Earthworms form channels and burrows, which allow rainfall to infiltrate the soil father than run off,” explains Dr Leake. “Of course they are also known as ecosystem engineers, helping to mix soil and mobilise nutrients.”

If no-till is the eventual aim, growers need to appreciate that worm numbers do take time to build up and there will be occasions where compaction occurs, which has to be remedied, he continues.

“Fortunately our work with a low-disturbance subsoiler shows there is very little effect on earthworm numbers if you do have to resort to one. No-till doesn’t have to be all or nothing.”

Having said that, he highlights that the highest wheat yields at the Allerton Project this year came from a field that has been in no-till for eight years, proving that resilient soils are a good investment.

Even so, the plough hasn’t been abandoned completely and Dr Leake is quick to point out that there is still a place for it.

“Quite often, one plough in the rotation is a good thing to do. It doesn’t have to be devastating to earthworms – our work has shown that having built up earthworms from 200 to 700/cu m by adopting no-till, some ploughed strips in the field had 350 worms/cu m.”

Having established that ploughing once in such a scenario didn’t put earthworm numbers back to their original level, the team at the Allerton Project is now investigating the length of time it takes them to recover, as well as the effects of ploughing for a second time.

Certain crops being grown on particular soil types are at high risk of erosion. Good examples of this are maize being grown on a slope or potatoes on lighter soils.

“Any crop that is harvested late can be an issue,” reveals Alastair Leake. “Late-sown cereals are one of the worst offenders for soil erosion, but it’s actually the fault of the previous crop – they tend to follow maize and potatoes.”

The use of crop residues and loosening for infiltration can help, and there have been good results from the use of serrated rollers on light soils where a very fine seed-bed is required.

“These make pocket indentations in the soil, so that any rain is held and has time to soak in. But it only works where there is a very fine tilth.”

A well-structured soil is a central part of the soil erosion solution, as it can absorb heavy rainfall and will act as a sponge, reducing run-off.

“Making your soil resilient is one of the best actions you can take, as it becomes a reservoir and allows water to infiltrate,” he says.

“Wider working windows are another advantage, so any cultivations can be carried out at the right time.”

Increasing soil organic matter will help with soil structure, as absorption improves and there is less risk of capping and compaction taking place. Dr Leake highlights three ways of doing this:-

“It’s all about making your soils work for you. At Loddington, even after a reasonable amount of rain in October, the drains weren’t running. The soil is coping with the weather.”

On sloping fields, 80% of soil erosion occurs down the tramlines – making them a conduit.

Methods to prevent this happening have been investigated at Loddington, with a loosening tine being used behind the back wheels of the sprayer as it makes its autumn herbicide pass.

“It’s a method of opening the soil up in the tramlines, so that the water infiltrates,” he says. “It may not be possible for everyone to adapt their sprayers in such a way, but it does help.”

Even more effective was the use of low-ground pressure tyres on the sprayer, which reduced erosion by 50%.

Once measures have been taken to prevent erosion in the field, growers should look outside the field to see what can be done to capture any losses.

“The problem is caused by the convergence of water at the same time in volume,” explains Dr Leake. “So if you can reduce the volume and the velocity of the water, it can help reduce soil erosion.”

What about wind erosion?

Crop residue cover and companion crops can be used to reduce wind erosion.

Growing barley in with the main sugar beet crop helps to hold the soil in place and protect the beet plants as they are emerging. 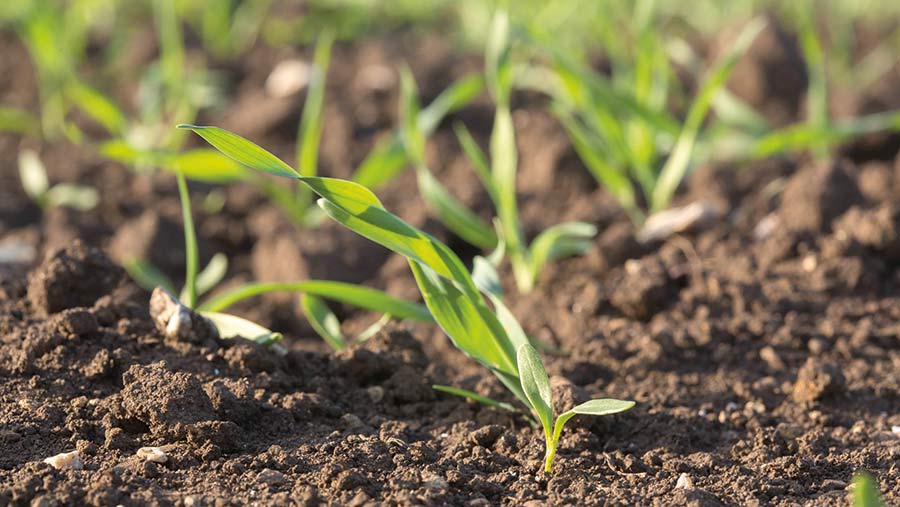 “If you have wind blow when the crop is emerging, it can kill the seedlings, which are vulnerable at this stage. The barley or companion can be sprayed out when it has done its job and the soil has been held,” says Alastair Leake.

Around fields, tall hedges can help, as any soil being blown across the field will collect in the hedge bottom. Any planting done to assist with this must take account of wind direction and likely strength, in order to avoid funnelling.

“Gateways are a problem,” admits Dr Leake. “There’s nothing you can do to prevent soil being blown through them.”