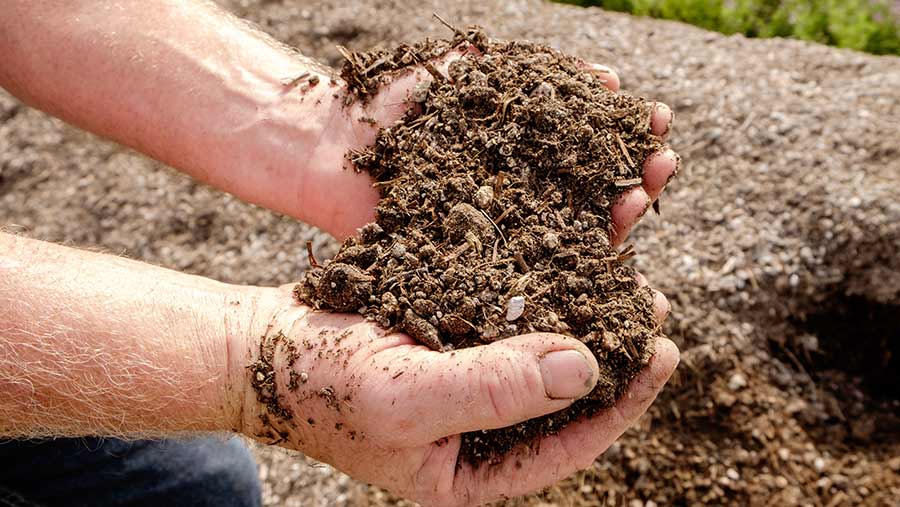 Home-made compost combined with an extremely diverse rotation and minimal soil disturbance has the cut the inputs and agronomic management needed on Simon Cowell’s farm at Lawrence, near Southminster, Essex.

Approach: Moving to a system based around promoting mycorrhizal fungi, which have a symbiotic relationship with plant roots and help them absorb nutrients. No-till cultivation protects soil structure, and a diverse rotation and home-made compost supports and feeds them.

Mr Cowell has built his system around supporting the mycorrhizal fungi in the soil, an approach which has not only resulted in healthier, more resilient crops, but has also seen him crowned Soil Farmer of the Year 2018.

Having stopped cultivations at Motts Farm 12 years ago, Mr Cowell uses no seed treatments or plant growth regulators, and minimal insecticides across the 162ha of combinable and forage crops on very heavy clay soils.

See also: What to consider when changing your establishment system

Added to that, phosphate and potash applications ceased 20 years ago, nitrogen fertiliser use has fallen and most winter wheat crops receive just two fungicide applications, according to need.

He is looking to cut inputs even further through intercropping.

“We’ve got much less capital tied up in our crops now. As well as lower inputs, the machinery and labour requirement has fallen,” he says.

“That has allowed me to try new things. A bit more risk is fine with this system – we can afford to have a few failures if we learn from them.”

Mr Cowell’s inspiration comes from nature, which he describes as the perfect system for being able to correct its own problems.

He realised that no-till was the best way to have as little impact on soil health as possible.

“The driver has always been to consider what effect my actions would have on soil biology,” he explains.

“Mycorrhizal fungi are the key to healthy, stronger plants and if the soil is in the right condition, the fungi will be there.”

The discovery that cultivating breaks up the soil fungal hyphae and disrupts their function, creating a downwards spiral, was a turning point.

“Before we changed, it was becoming increasingly difficult to establish crops successfully,” says Mr Cowell. “Everything that we were doing to create seedbeds was working against having a healthy soil.

“It had become a continual process. As a result, heavy nitrogen applications had to be used to get good crop growth, which just threw everything out even further.”

Mr Cowell stopped growing oilseed rape and second wheats to instead bring in a much more diverse mix of spring and winter cereal crops.

This includes pulses and linseed, as well as perennial crops such as lucerne and herbage seed.

“Almost immediately, nitrogen use halved. And having perennial crops in the mix means that they can be rotated around the farm, resting the soil.”

The lucerne, which is grown for Dengie Crop Driers, stays in place for three years, with up to three cuts being taken each year. It receives one herbicide in the winter and no additional fertiliser.

Herbage seed crops stay in the ground for over two years, often being undersown in spring barley. While they do need nitrogen fertiliser, there are no herbicides or fungicides applied.

There is no fixed rotation, with crops being grown to suit each field. “Diversity is important with a biological farming system. We haven’t grown peas for a few years, but winter beans do well with this approach.” 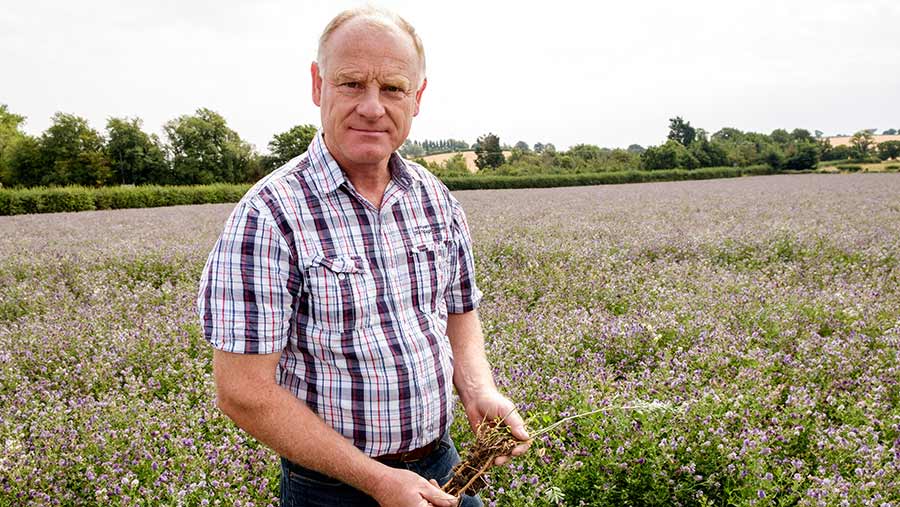 Simon Cowell in a field of lucerne © Jason Bye

As soil fungi populations build up, the symbiotic relationship between them and plant roots brings efficiencies, with the two working together to provide the crops with the nutrients they need, he says.

Brassica crops, such as oilseed rape, do not support mycorrhizae, which is one reason why it is not included in the rotation.

Tests are carried out for the fungi to check that levels are sufficient. This year, a wheat crop being grown after linseed still had high levels of root colonisation, so his decision not to include a cover crop before the linseed has been vindicated.

“There is a view that cover crops need to be used to maintain fungi in the absence of a crop,” he says. “They don’t seem to be necessary here – we’ve found that once levels are high and the conditions are right, the fungi will stay.”

Blackgrass is also non-mycorrhizal, so changes in the soil have helped to reduce weed populations. In some fields blackgrass has vanished, while in others it is still present, but the weed is weakening as soil conditions alter.

To provide a food source for the soil biology, Mr Cowell makes his own compost and spreads it at low rates in the autumn.

Based on locally available materials, including horse manure, gypsum, wood chippings, grass cuttings and top soil, he controls both temperature and moisture as it develops to prevent it becoming anaerobic or too dry. Once stable, he leaves it for a year to allow the fungi to grow.

“The greater the diversity of the ingredients, the more life you get in the compost,” he says. “It is important to get the carbon-to-nitrogen ratio right, as carbon is needed by the soil microbes.

“Compost is the one inoculation that works,” he says. “The biology has somewhere to live and once it is spread, it gives soil levels a boost.”

Application rates of 1.6t/ha allow him to cover the farm in five years. This autumn, he plans to try a lower rate of 0.8t/ha. 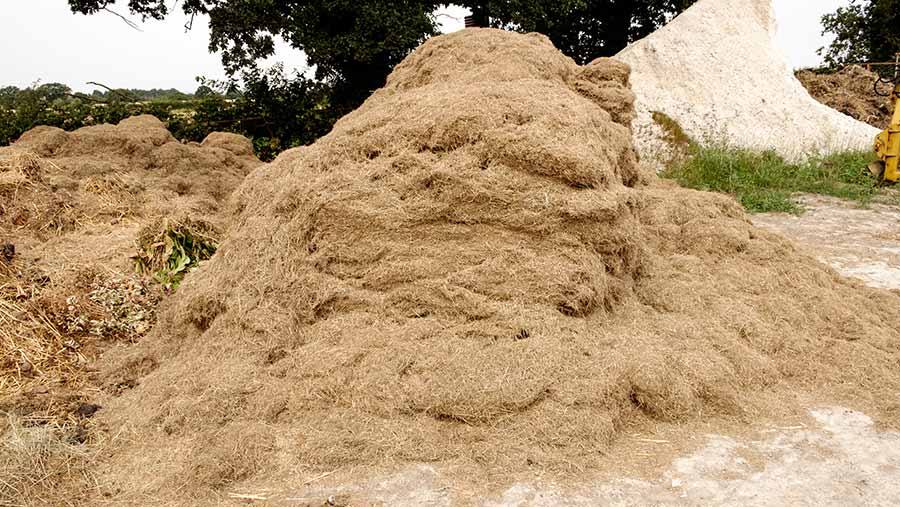 A cocktail of four feed wheat varieties is drilled across the whole farm, after Mr Cowell decided to bring in genetic diversity to limit the spread of disease.

Having looked at their parentage, he chose Conqueror, Gator, JB Diego and Panorama in equal proportions, and has since saved the seed and re-drilled the mixture two years in a row.

At 7.7t/ha, it proved to be the highest yielding of the eight wheat varieties grown in a farm trial, as well as having the highest Hagberg.

“We compared it to newer varieties grown on their own. There was less disease in the mixture, which is what we were hoping for. Any differences in height and maturity between the component varieties seem to have evened out.”

His interest in varieties which are best suited to a no-till system has resulted in an on-farm trial of KWS wheats.

“Originally, we found the Conqueror was the best, as it is taller and seems to root better. Crispin is another variety of interest – it seems to have a similar growth habit to Conqueror.”

He is also doing a second wheat trial looking at eliminating the use of nitrogen and fungicides, comparing it to the use of foliar N and N-fixing bacteria.

“Having just combined it, we achieved 6t/ha from the zero nitrogen and fungicides trial. Nitrogen drives disease – the plot without fertiliser and fungicides had just one herbicide this year.”

Another trial is investigating different input regimes, with a high-input system of four fungicides and two PGRs being compared to his farm practice of two fungicides, no inputs at all and a biological approach of molasses, humic acid and fulvic acid, to feed the soil microflora.

This new series aims to showcase arable farmers who are ahead of their time and are trying new approaches, whether it’s growing new crops, taking a radical approach to growing oilseed rape or being a pioneer in the use of new technology.

If you know of any trailblazing farmer or wish to be featured in this series, contact the arable editor at richard.allison@reedbusiness.com.