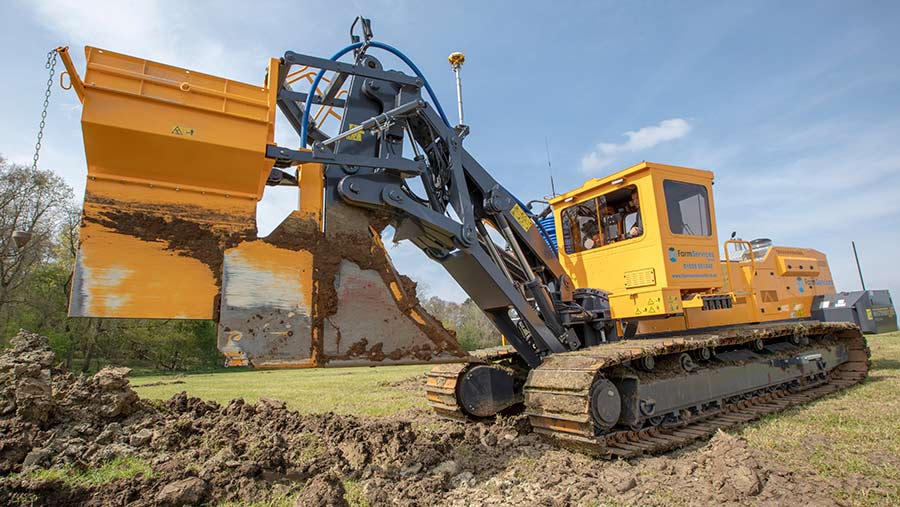 Mastenbroek has built its first UK-bound trenchless drainage plough in more than thirty years for Warwickshire-based Farm Services, which is keen to satisfy a resurgent number of farmers requesting field-scale drainage works.

The decision by third-generation owner Rob Burtonshaw to part with £400,000 for the monster drainage tool has coincided with an upsurge in demand from agricultural customers in the past five years.

This is mainly driven by concerns over field water and its potential to harm crop yield potential.

Soil health has returned to the agenda for many farmers over the past few years, after a sustained period of absence that, for some, began in the early 1980s.

At that time, grant aid that helped growers install field drainage projects was stopped and it also became more appealing to invest in heavy horsepower rather than sub-surface drains.

This curtailed a lot of invest in an essential farming practice and has left many fields relying on ageing schemes.

But with soils now back in fashion, drains are once again seen as a vital cog in the farming wheel. 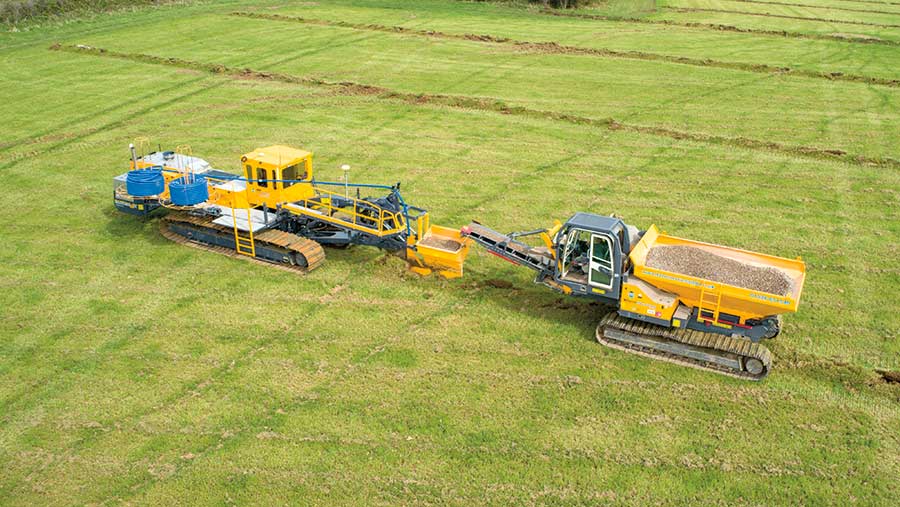 Out with the old

The boom years of grant-funded drain-forming saw many contractors busier than ever.

However, the withdrawal of financial incentives hit the industry hard, work dried up almost instantly and many contractors went out of business.

For Farm Services, construction and sports field work has become a mainstay of the business and has meant it has kept two of its own chain trenchers in service.

These create and leave a small, open channel across the field and have the advantage that operators can see what is below before back-filling. The downside, though, is that it’s slow.

The firm also kept hold of its 30-year-old Mastenbroek plough, which provides a more agricultural finish than that of the chain trenchers – its large, single leg bulldozing its way through untouched soils to leave a high ridge of soil.

However, the increased agricultural workload has meant the three-decades-old machine was starting to show its age and was running at full output last autumn to satisfy customers.

This, combined with his experience in America on his Nuffield studies, convinced Mr Burtonshaw to splash out on a new outfit capable of getting pipe into the ground quicker and more accurately.

The 40/20 I drainage plough runs a Volvo Penta 13-litre, six-cylinder engine that pumps out a monstrous 428hp.

This may seem a little excessive to pull one large leg through the ground, but key to good drainage is keeping the pipe at the right depth and if hard spots are hit, the huge motor has the power to pull through.

The unit sits on two huge 6.4m steel-lugged tracks that help to spread its 32t bulk.

Controlled by two stubby levers on the seat’s armrest, each track has its own separate closed-loop hydrostatic pump, with load-sensing pumps controlling all the hydraulics from the 340-litre oil tank.

There are some small changes to this machine compared with the older one, including electronic lowering of the pipe holders from three separate control points that makes it simpler to load new reels.

Luxuries extend to an air-conditioned cab and heated seat, DAB radio and Bluetooth.

The cabin also has 25cm of elevation, so the operator can get a bird’s eye view of proceedings, and there are two cameras to help negotiate tight corners.

In 2012, Rob Burtonshaw travelled to the US and Canada as part of his Nuffield scholarship to investigate the role of land drainage in improving crop yields.

He found that drainage ploughs were used to install about 95% of field drains and this convinced him that it was worth investing in a machine that was specifically suited for agricultural drainage projects.

Not only that, he brought back tips and techniques to improve his business, including ways of transporting gravel quicker, slicker ways of digging junctions and speedier methods of cutting pipe

Many of the components are tried and tested, but the big difference with Mr Burtonshaw’s version is the back-end, which mirrors units at work in North America.

The huge blade is attached to the tug by a double-parallelogram linkage that has slew and tilt functions.

To get a feel for the size of the arm, there are two 6in-diameter rams to control the lift and a further five four-inchers for the slew, tilt and auto level functions. 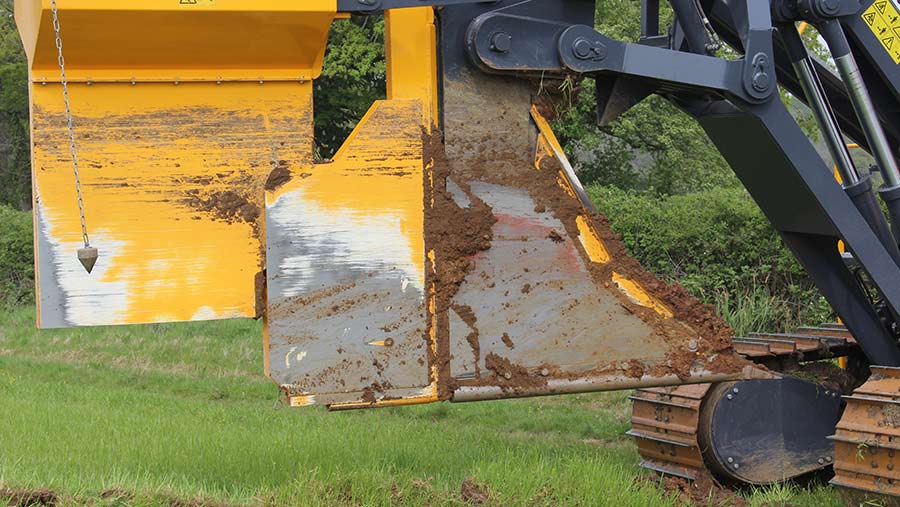 At the business end are replaceable 50mm Hardox points and 12mm side shims – much the same as a subsoiler – that can drop pipe to a depth of 1.8m.

Behind the blade is the pipe box, which feeds the tubing from the reels mounted on the side of the machine down the back of the blade and into the bottom of the trench.

The gravel box is filled by the following cart and drops a layer of material on top of the pipe to the desired level – typically 300mm from the surface – though it is adjustable to suit specific schemes.

All the machine controls in the cab run through a Danfoss terminal and the blade is operated by a single proportional joystick on the left-hand armrest.

However, what has brought this rather rudimentary beast into the modern era is a dose of technology that is appreciated by both owner and operator.

An RTK signal is provided by a portable base station set up in the field the machine is working in.

The old model had no self-steering and even though these huge machines crawl along at just a brisk walking pace, using GPS means drain positions are repeatable at whatever spacing is required.

Operators no longer need to mark out the fields prior to work, so set up time is just a matter of waiting for the RTK signal to connect to the two domes on the machine.

One sits on top of the cab and takes care of the steering, while there is another on the plough blade to help get a true straight line and help control the depth. 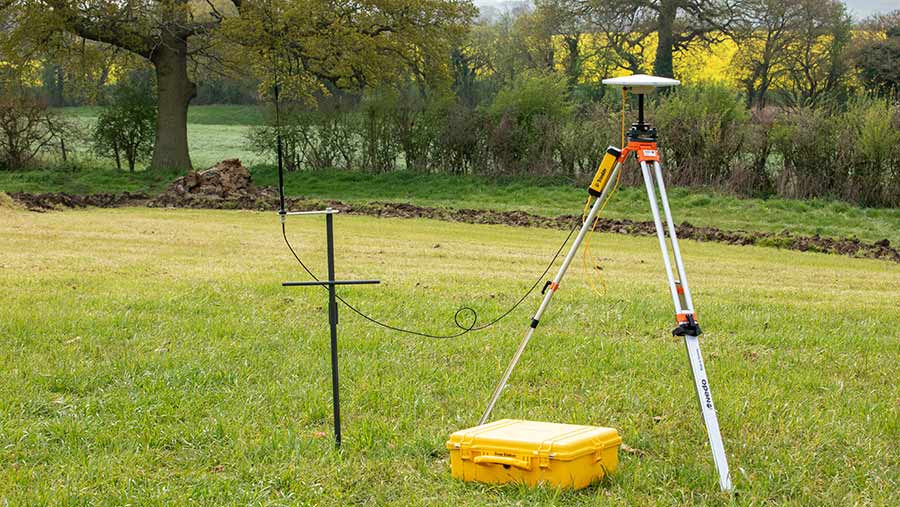 The controller takes a depth measurement every 3m to accurately calculate the position of the pipe, which is important considering the operator can’t see what’s beneath.

This mapping system runs through a Trimble TMX display with the WM drain program installed and can be done either by driving down each drain line before pulling back up with the plough engaged, or pre-mapped using an ATV and loaded onto the machine via a memory stick. 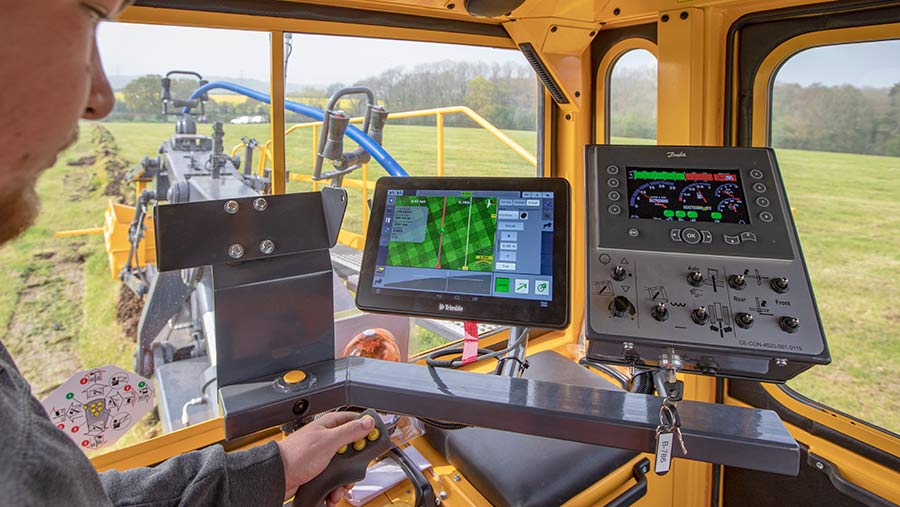 The drainage program will keep the blade at a set depth and gradient, so all it requires to get going is a starting depth.

After this, it will automatically manage the plough’s position across the field, leaving the operator in control of power tweaks.

This will also help to iron out low spots in a field and make changes in pipe level more gradual.

Another benefit of the new plough is its daily output.

The previous plough would aim to lay about 2,000m on a good day, whereas the new machine looks capable of similar performance without breaking a sweat and will keep two or three gravel carts busy in the process.

These carts will be the limiting factor in output and trying to get gravel heaps close enough to the field to limit carting distance is key.

Mr Burtonshaw also has to consider the process of digging junctions where the lateral drains hit the main headland lead.

A 3m excavation is needed for the blade to sink to the right depth where it meets the headland drain, and this needs to be open in order to connect the pipe into the main headland section. 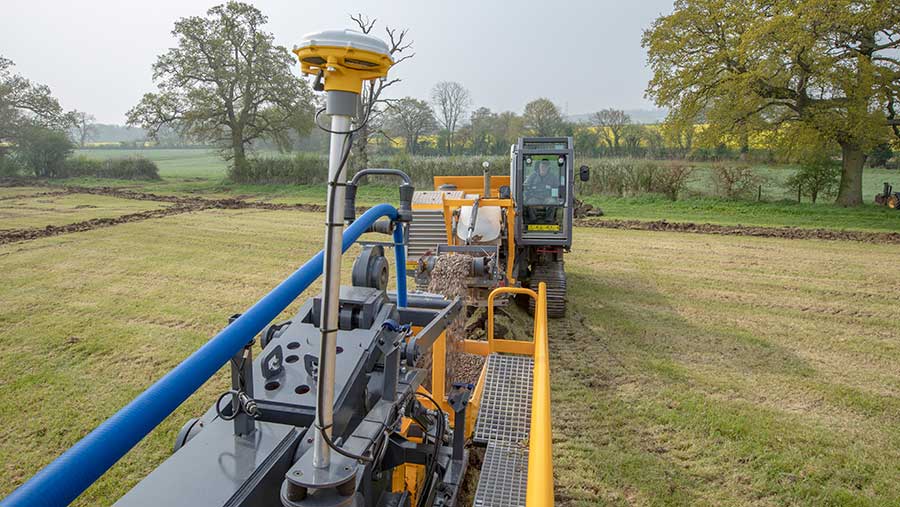 As the plough rips through soil it lifts material either side of the leg and creates a ridge that is too large to pull a cultivator through.

This is the main difference to the neat finish left by a chain machine and requires a loader or digger to knock the tops off.

This is all part of the package provided by Farm Services, so the end user can cultivate the field straight away.

The busiest time for the plough will be prior to cultivating, but installing into ploughed or cultivated land remains an option.

The only real requirement is that the soil is dry enough to take the machine’s weight and prevent the tracks digging their own holes.

Ultimately, Mr Burtonshaw hopes the machine will save the customer money, as depth adjustments made via the GPS will reduce the gravel required for back-fill.

Put to work at Ragley

We visited the new machine on its maiden voyage draining a notoriously wet field at the well-known Ragley Estate just outside Alcester, Warwickshire.

Farm manager Hamish Stewart believes the payback for the drainage schemes he has had installed is quicker than he budgeted for due to increased yields and the ability to bring unused fields back into production. 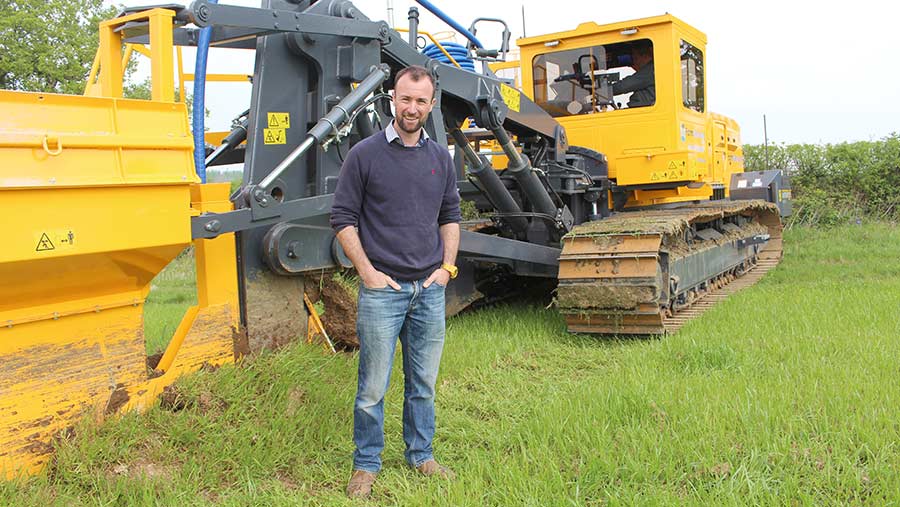 The 1,600ha farm used to have a heavy oilseed rape rotation, which Mr Stewart says didn’t help the soil – he still finds the deep roots wrapped around land drains when one becomes blocked.

He says the poorly drained soils have really limited their performance, particularly when left to reach an anaerobic state.

Recently, sheep that graze the historic parklands have been introduced to the arable rotation, along with catch crops, which means the soils are rarely left dormant.