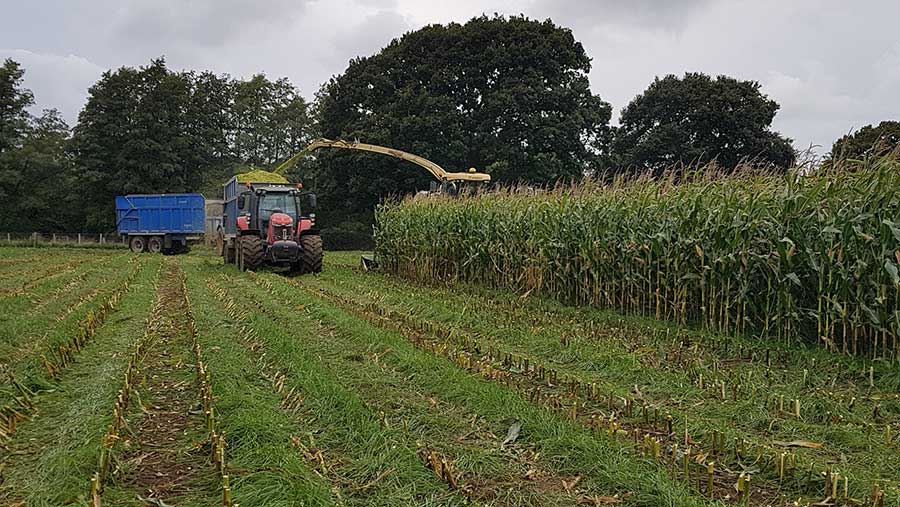 A mix of tall and advanced fescues were undersown with 40ha of maize at the 320ha Wappingthorn Farm, near Steyning, where maize, grass and fertiliser are placed in the soil together in a one-pass establishment system.

Placing a greater focus on environmental issues associated with maize production, such as nutrient leaching, run-off and compaction, Mr de Boer turned to this method as a more sustainable maize production strategy.

“Farmers must be responsible for growing maize and need a proactive approach to reducing its environmental impact,” Mr de Boer says.

Undersowing provides a simple and effective way of achieving this and brings many potential benefits, including reduced nitrate leaching, improved soil structure and optimised slurry/digestate applications.

“Undersown grass has definitely been worth it, harvesting has been much easier, and after 10cm of rain, we were still able to carry on harvesting on sites with grass,” he adds.

The grass was sown at the same time as the maize crop on 22 April, using a 3m Mzuri Pro-Till 3 strip-till drill – 40% funded by a Leader drill grant – which was specifically adapted to Mr de Boer’s requirements. 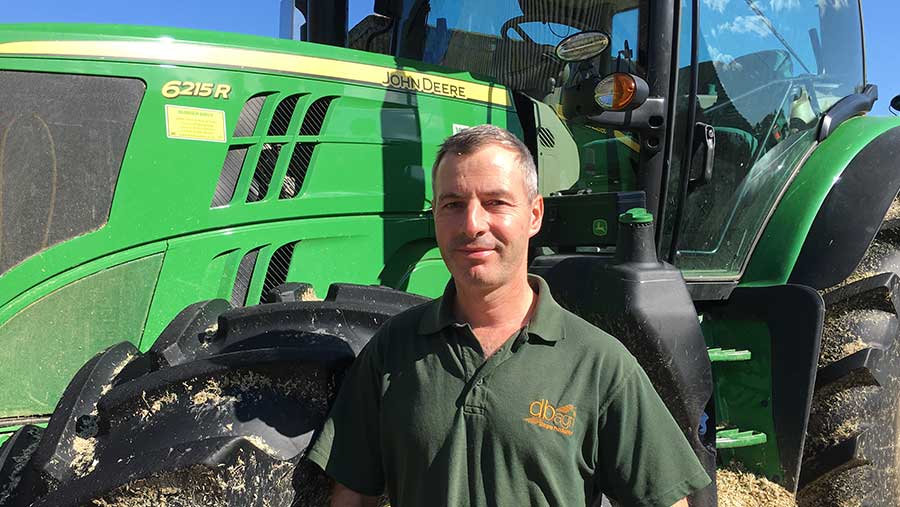 The maize is drilled at 3-10cm deep, depending on the moisture level after deep cultivation. The grass is drilled shallower at 1cm, at a 15kg/ha seed rate, costing about £70/ha.

“Drilling is a very slow operation, but half the amount of power is required, so costs have been reduced,” he adds.

The timing and spacing of drilling is critical for effective establishment of both maize and grass. The maize is drilled at 66.6cm, with the grass 15cm away from maize to maximise light absorption while reducing risk of competition from the grass.

It’s important growers use the optimum species for their soil structure and remember that alternative fast-establishing grass species can outcompete maize and too much grass growth can make difficult harvest.

However, barnyard grass can be a challenging weed to control, as this annual plant can’t be removed successfully without harming undersown grass.

“Once the weed takes hold, it can significantly compete with the maize crop. If necessary, we would take out the grass to save the maize, but we haven’t had to do this so far,” explains Mr de Boer.

He currently grows 200ha of maize for two years in succession – predominantly for combinable grain maize, but also for his on-farm AD plant.

The first maize crop is undersown and harvested where the grass is left, and later sprayed off with glyphosate. Then the second maize crop is precision drilled the next spring into the same rows as the previous maize crop.

A cereal crop is planted next, either wheat or rye, followed by a green manure cover crop comprising vetch, black oat and phacelia. This provides soil conditioning and grazing for 800 sheep across 80ha of cover crop, as well as undersown grass.

Harvesting of the maize crop is well under way, with yields at 43t/ha. Although Mr de Boer hasn’t seen any yield benefits from undersowing, he is extremely pleased with the soil health benefits it brings. He advises farmers to select sites that are most vulnerable to erosion to undersow. 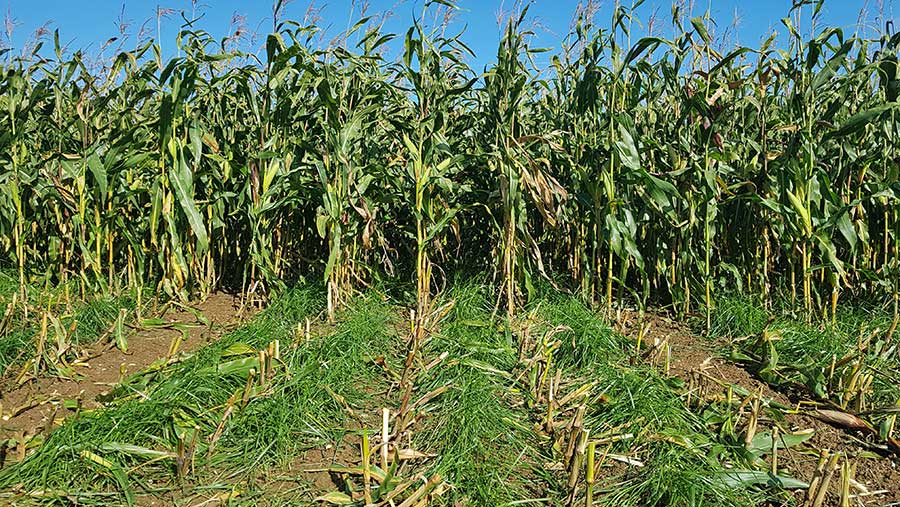 Left-over trash from this system can be problematic, with an increase in pest pressures, including slugs, but in particular the European corn borer.

Adult moths breed in grass margins and the undersown grassy strips and feed on the leaves and stalks of the maize plants. Numbers can build up rapidly, with each moth laying up to 100 eggs a night, creating major yield implications.

“This year has been the worst so far on farm, with infestation levels at 5-25% of the plant population, causing a 4-5% reduction in yield in badly affected areas,” explains Mr de Boer.

Most maize growers on the south coast are threatened by the corn borer, but risks have escalated in recent years due to milder winters and a shift away from ploughing.

As the corn borer lives and hibernates in the maize stalk, sheep grazing, mechanical topping and rolling of fields after harvest can play an important role in reducing pest numbers.

The grass habitat has also spurred an increase in the number of natural predators and other beneficial insects such as ground beetles, ladybirds and wasps.

Next year will see the loss of the seed dressing Mesurol (methiocarb), which reduces the risk of damage from birds and frit fly, while maximising establishment rates.

This seed treatment loss could see a 20% increase in maize growing costs and a reduction in yields, with deeper and later drillings needed to protect the crop, says Mr de Boer.

This could lead to later harvests and further environmental damage, highlighting the importance of undersowing with grass.

Although Frans de Boer is not receiving any environmental payouts for his undersown grass, a number of potential funds may be available for such cropping practices.

Catchment Sensitive Farming is currently working together with farmers and organisations in priority catchments across England to improve water quality and provide free expert advice.

A payment for early-maturing maize varieties and the sowing of a post-harvest grass crop is also on offer. Currently, the scheme is under review for next year, with information for next year’s scheme available in early 2020.

For those not in allocated catchments, funding may be available through the Countryside Stewardship scheme, which provides growers with a payment of £133/ha for an established green cover crop, once early varieties of maize are harvested.

“When maize is badly managed, it can be a risky crop to grow, contributing to soil erosion and phosphate run-off. It’s beneficial to both the environment and farmers to keep hold of their valuable topsoil so nutrients are left in the field,” she adds.