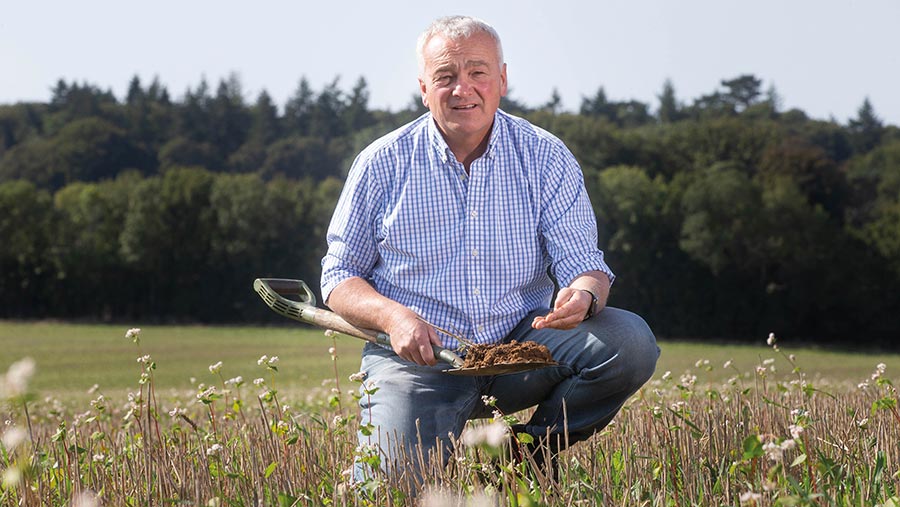 Some may view regenerative farming as going back in time with its emphasis on rotations, diversity and livestock integration, but for Ken Hill Farm & Estate in Snettisham, west Norfolk, the use of technology is a key part of the transition.

“We need to look at different ways of managing our risk,” explains estate manager Nick Padwick.

So he is looking at different technologies to see if they are useful.

“We might get our fingers burned, but if this helps us make decisions, the cost benefit will be worth it.”

So what technology is Ken Hill Farms using this season and why?

Reducing synthetic inputs is one of the core principles of regenerative farming as it helps both reduce chemical disturbance of soil as well as lowering costs.

It’s also a key aim for Ken Hill’s focus on only applying inputs when necessary.

To help with decision making, Mr Padwick is making use of three tools and technologies from Metos UK – the first is MobiLab, which is a mobile soil nitrogen testing lab costing £2,800 including the first 100 samples.

“It allows us to run our own soil nitrogen tests. It gives ammonium and nitrate levels from whatever depths and how often we want,” Mr Padwick explains.

It works by running an electrical charge through a liquid sample, which gives you a score for the available ammonium and nitrate, he says.

Samples are prepared from adding an extraction buffer solution to a known quantity of sieved soil, which is then shaken for 30min, filtered, before a small amount of filtrate it tested in the MobiLab.

Mr Padwick suggests the advantages of the technology, which is new, are the speed of results and limiting any errors due to handling time from sampling. “I’ve been told accuracy is the same as any laboratory.”

He hopes regular testing will help him understand how much he can reduce synthetic nitrogen applications as a result of other changes being made, such as the use of cover crops, intercropping (see “Intercropping trials continue”, below) and improved nutrient cycling within the soil.

“I’m hoping there will be a lot more microbial activity, and we’ll be able to test whether there is through the MobiLab.”

Historically, nitrogen applications have been up to N max limits, he says.

As well as continuing with intercropped spring oats and peas after a successful trial last season, the farm is trialling some new intercrop mixes this season, estate manager Nick Padwick says.

“Last year on the oats and peas, we only put a small amount of fertiliser down the spout when we planted the oats.

“We want to see if we can get more out of two smaller-yielding crops than we would from a monoculture crop while spending a lot less.”

Harvesting last year was straightforward, with both oats and peas ripe at same time, with cleaning and marketing of the mix this year through Cope Seeds.

He is hoping that by undersowing wheat with clover before his enhanced overwinter stubble for 12 months in Countryside Stewardship, he can build up enough fertility to reduce this even more.

Costing £800 for the rental of a weather station including one disease model, the Metos Field Climate system uses weather data such as rainfall, humidity, temperature and leaf wetness recorded by the weather station on farm to assess the likelihood of infection. 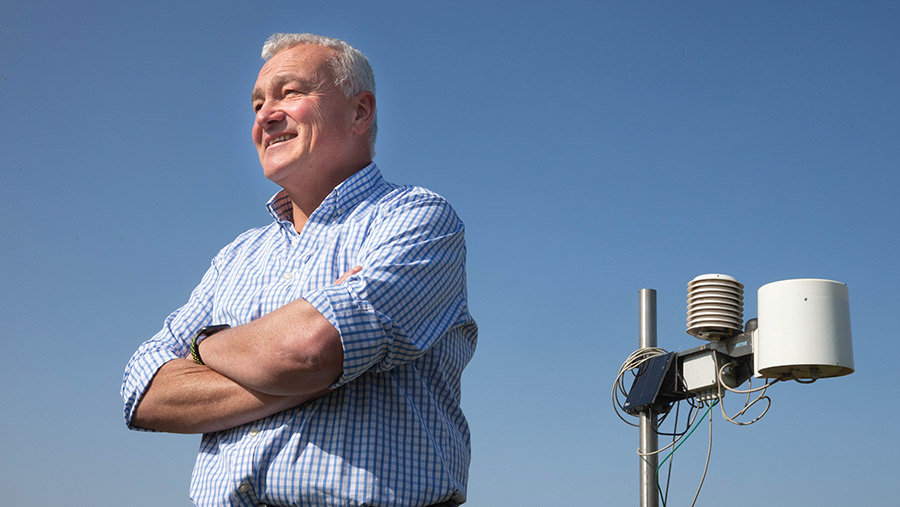 “When you embrace technology to help you make decisions, you have to see it through,” he says.

He did that last year with the disease models and it worked.

“Yes, it was a very dry year with very little disease around, but the only fungicide we used on wheat last year was an ear spray on three fields.

“Across the entire wheat area we spent just £1.10/ha on fungicides.”

So far this season the models had only suggested a 5% chance of severe septoria infection in March, with 100% being deemed ideal conditions for infection.

There had been a couple of higher spikes for yellow and, perhaps more surprisingly, brown rust.

“We feel we understand the septoria model, but we’re now getting our heads around the rusts.

“Our agronomist ground truths the models in the field.

“So far, we’ve done nothing as there’s nothing there to spray for.”

Currently, the data is based on recorded weather, but he hopes that a three-day forecast can be incorporated into the model to give the chance to intervene proactively with fungicide if necessary.

“If we are going to intervene with a fungicide, it is better to do it before infection than after.”

As part of the estate’s transition to a regenerative system, one 9ha field has been split between conventional and regenerative practices, with both sides closely monitored in conjunction with Frontier for differences using in-depth soil testing and the use of soil probes, as well as simple, practical tests.

“For example, it took only three minutes for an inch of water to infiltrate on the regen side compared with 4.5 minutes on the ploughed, when the soils were nearly at full capacity.”

Coming out of oilseed rape, the regen side was planted with a cover crop, before being sprayed off with glyphosate and direct-drilled with winter wheat, while the conventional approach was ploughed before being drilled with the wheat.

After the wheat crop, the conventional side will have a traditional overwinter stubble before being ploughed and drilled with a spring crop, while the regen approach will be cover cropped and grazed by sheep.

Each side is being monitored using a Metos soil probe measuring soil moisture, temperature and water-holding capacity every 10cm down to a depth of 60cm.

“I want to see whether there is a difference in how water is being filtered through those two different farming systems,” he says.

“What drives our yield is the water-holding capacity of our soils.

“If we are able to put more structure into our soils and hold on to that water in drier springs, that will create more yield stability, so we’re not so reliant on rain at the right time to see crops through.”

In-depth soil tests are also being carried out by Eurofins on each side, as well as other fields on the farm.

“We’re building baseline information for both systems, including biology, as well as chemical and physical characteristics.”

Biological tests include microbial biomass, total fungi and bacteria counts, and fungal-to-bacterial ratio, as well as the more typical nitrogen, phosphorus and potassium (NPK) and pH.

The initial tests have shown the regen part of the field has 303 mgC/kg of microbial (carbon) biomass compared with 215 mgC/kg in the conventional side.

“The target value is between 150 and 450, so is that difference a good thing? The next stage is understanding what these are telling us.”