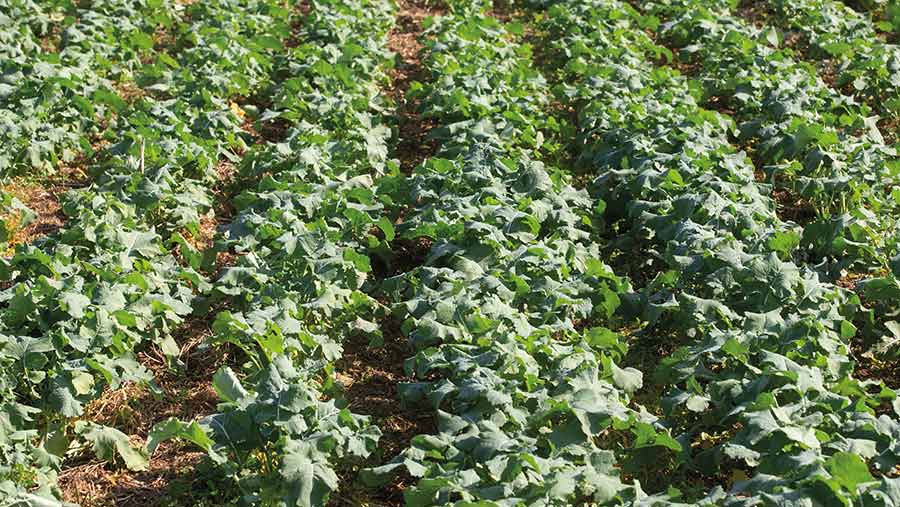 It is safe to say Nick Padwick isn’t looking for a long transition to farming using regenerative agricultural principles at Ken Hill Farms and Estate, near Snettisham.

With an immediate cost saving of £40,000 on diesel and a reduction in fixed costs from £562/ha to £330/ha in just one year, there are already some positive reasons why a virtually complete change in philosophy has been implemented so quickly.

Mr Padwick arrived as estate manager two years ago with a blank slate to transform the 1,400ha estate to farm in a more environmentally friendly way.

See our previous article in this series:

Regenerative farming: The theory and the farmers doing it

“An 18km boundary fence has been put around this area, and we will introduce 33 Red Poll cattle, a couple of pigs and 10 Exmoor ponies initially.” 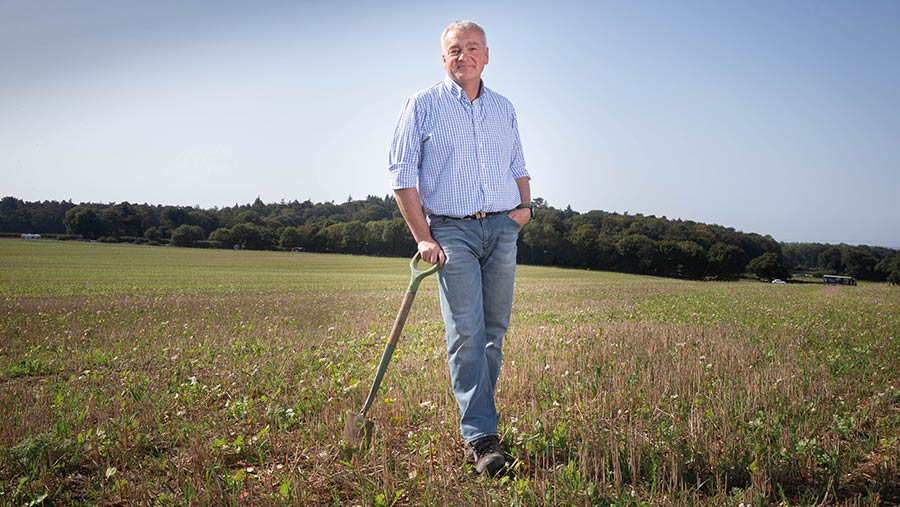 With payments of £409/ha for WD6 and £244/ha for WD5 he says it will create a margin that arable cropping would never have made on the land, which is either loamy clay infested with blackgrass or virtually pure sand, yielding only 8t/ha of wheat in very good years.

The philosophy of only farming more-productive land is also being applied to the remaining 625ha of arable land on the east side of the estate. “Water is still our main limiting factor on shallow lime-rich soils over chalk, so it is not high-yielding land. Wheat averages about 8.2t/ha.”

That has meant removing a further 176ha of land from production, which are now in various other Countryside Stewardship options, creating a corridor of environmental habitat running from the south-west to the north-east of the estate.

The schemes deliver environmental benefits and a stable guaranteed income which, at an average net margin of £300/ha, is better than a lot of Mr Padwick’s arable crops this year.

It has also allowed him to improve efficiency by farming in rectangles based on 36m boom widths to fit in with the controlled-traffic system he has introduced.

The move to a controlled-traffic farming system to reduce traffic in each field is helping to achieve one of the regenerative farming goals of minimising soil disturbance. But the big change was moving away from an establishment system of plough, press, cultivate and drill.

“We now use direct-drill, min-till and drill or strip-till and drill. In our first year, we saved more than £40,000 in diesel, despite the price going up.”

Machinery is managed through Peddar Farming, a collaboration with neighbouring farm businesses across 2,800ha, which Mr Padwick heads up.

“It has allowed us to become more efficient in our farming systems.”

Power harrows, ploughs, a Cousins cultivator, beet drills, beet cultivators and three tractors have all been sold, and replaced with a Horsch Avatar drill and two smaller, nimbler 250hp tractors, he says. Other machinery, including a Carre strip-till drill and Vaderstad Tempo drill, remain.

The Tempo is used to precision-drill sugar beet and oilseed rape after strip-tilling, while the Avatar direct drills covers other crops.

The Avatar is a key piece of kit, Mr Padwick says. As it is able to plant seeds to different depths in one pass, with the addition of a mounted air seeder to broadcast the smallest cover crop seed, he can drill the other species in his 10- to 16-species cover crop mixes to different depths. “Everything is in at the right depth to grow.”

Cover-cropping about 90% of the land is part of the plan to move from a traditional, more winter crop-dominated rotation of oilseed rape, winter wheat, sugar beet, spring barley and winter barley to a spring crop-dominated one – and a much more diverse one, at that.

“We’re making it up a bit as we go along, but the plan is for a cover to be followed by sugar beet, then another cover or straight into spring barley, depending on lifting date, another cover, oats, cover, winter or spring barley.”

If it is winter barley, he will undersow with clover, then follow enhanced overwinter stubbles with oilseed rape, wheat, cover and then back into that rotation.

The support from various Countryside Stewardship options used within that rotation – for example, winter cover crops (SW6) before a spring crop pay £114/ha, which helps cover the seed costs, as well as keeping a living root in the soil for as much of the year as possible – are vital to help make the plan viable, he says.

“But we are on a journey to 2028, when we lose our support payments and go into ELMs [Environmental Land Management]. We want to improve our soils, wean ourselves off those high-input crops and the fertilisers and sprays we’ve been used to, and get our soils into a position where we don’t need to apply so much, if any, of those inputs.”

Reducing inputs and chemical disturbance of the soil is already a key focus for the business, Mr Padwick says. “For much of my career I’ve used lots of inputs, but lately I’ve started to question why I am doing this. What is the benefit? Or is it just an insurance policy?

His policy now is to only use inputs when there is no other option.

The previous farm manager had stopped using foliar insecticides seven years previously, but that has now been extended to all insecticides and growth regulators, while technology is being used to help reduce other inputs.

“Our variable costs were down 50%, while, like most others in the area, our yields were down 30-40%, but we know not every year will be like this,” he says.

This season, oilseed rape has been hoed with a Garford precision hoe rather than using herbicides.

“The rape was drilled with the Tempo in wide rows – we had a huge weed burden, but hoeing it has allowed the rape to get ahead of those weeds, with the weather helping, and allowed the canopy to close over. Hopefully, that’s job done.”

Introducing livestock into the rotation is another part of the regenerative agriculture play book, which in Mr Padwick’s case is through an agreement with a neighbouring farmer.

“None of what we are doing is new – my father was doing this in the 1970s. But we do have a bit more knowledge and technology now and the team have really embraced what we are trying to do,” he concludes.