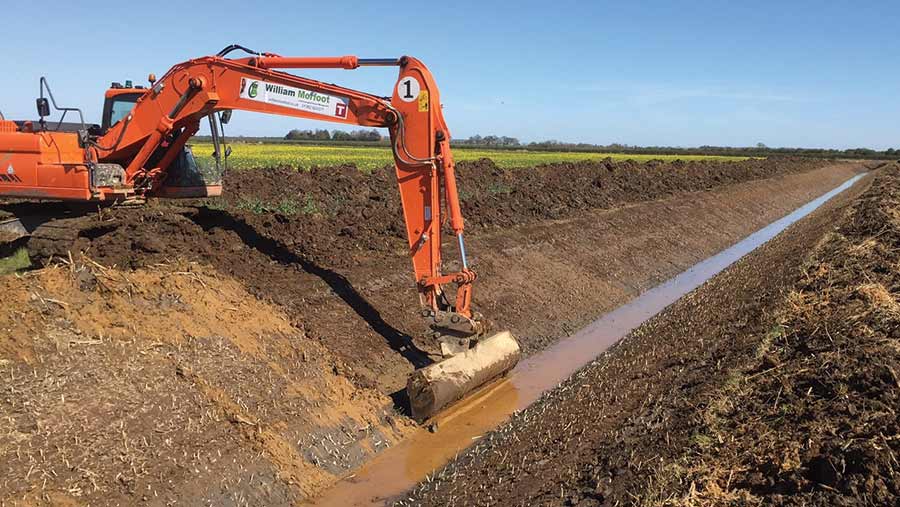 Regenerating ancient land drainage systems that are now unfit for purpose can deliver a yield increase of up to 35%, with the added benefit of improved soil health and weed control.

The past 30 years has seen minimal upkeep in drainage, with many growers overlooking this vital part of land management since grant aid for such work dried up in the 1980s.

Now growers are rediscovering the advantages of effective land drainage and securing the full potential of their land.

“Increased use of yield maps is helping to flag up poorer-yielding areas and making growers question whether it could be due to a hidden soil drainage issue.”

He says he has seen a big rise in the number of growers looking to improve their drainage – and in certain cases, yields following work significantly increased.

He adds that with land in short supply and values increasing, growers have been looking at getting more out of their existing hectares. Work can be carried out between crops or while a crop is in the ground, with many growers opting to replace a plot every one to five years, depending on cashflow.

Work speed and fuel use

Main drains are usually installed by specialist companies, but many growers opt to create their own mole drains to make a drainage system even more efficient.

Mole drains are unlined channels formed in a clay subsoil and are used when natural drainage needs improving on heavy land.

They channel water towards the main pipe drains or ditches and for best results soils need to be at least 30% clay to have the ability to hold the channel open once the mole is pulled through the subsoil.

They tend to last from five to 10 years, depending on factors such as soil type and climate.

Albanwise Farming has committed 200ha to new land drainage and watercourse improvement works as part of a three-year plan to secure its yield prospects.

Tom Dye, the farm’s managing director, says he has seen cases in the past where fields that were once blighted by drainage issues yielded about 35% more than before drainage work was carried out.

“In some fields we had some serious wet patches that were really hampering yields, so the boost to yields was the main reason for the work. We want to get the most out of the land we have,” he says.

The first step in the process was to work with the team at William Morfoot, combining yield data and expert drainage analysis for a comprehensive land review.

“This identified the 200ha needing most urgent work that we predicted would give the fastest return in terms of yield increase.”

The higher-yielding crops are just part of the story, however.

“There’s also a timeliness benefit, as we can travel on the land when we need to, and a soil health effect,” says Mr Dye. “These things combine to help give the right conditions for good crop growth.”

Properly drained land allows key fungicide timings to be met, even when conditions are far from ideal.

One block at the Norfolk farm saw wheat yields jump from 8t/ha before drainage works to 11t/ha afterwards.

Elderly clay piping was replaced with modern plastic equivalents, which will serve a far longer term of drainage duty.

Mr Dye sees the continual improvements to drainage as the key to returning production and profits back to land that was once too wet to farm.

As a ballpark average, Mr Sisson says that the cost of a new drainage system with 20m spacing and gravel back-fill will set you back between £2,000-£2,500/ha.

However, he adds that prices will vary massively depending on factors such as location to gravel supplies and land type.

“If you work this out over 20 years, it dilutes down to something that is not actually that expensive, especially when you consider that the system could last as long as the ones that are getting on for 50 years old,” he points out.

But it may not always be necessary to completely replace a drainage system if yields are stagnating according to Mr Hill, who co-wrote the AHDB’s new Field Drainage Guide 2015.

He says simple maintenance can also have dramatic and rapid results.

“This can result in yield-robbing waterlogging beneath the surface and is not merely a problem when there are visible wet patches in the field,” says Mr Hill.

In these cases, he recommends growers dust off their existing drainage plans or create a new plan showing pipes, outfalls and ditches.

“Blocked outfalls can be cleared with a spade in a matter of minutes and blocked drains cleared using a rod or a jet to rejuvenate an entire field,” he explains.

Sitting just below sea level near Beverley in East Yorkshire, Molescroft Farm is no stranger to water-logging.

After the wet 2012 season, managing director Tamara Hall decided to invest in drainage to expand the farm’s drilling window and get a better grip of costs.

“That was a really bad year, with standing water in some fields, and flooding is never helped by our location.

“It is such a short drilling window here and the costs associated with drilling earlier were getting out of control.”

“It is very easy for us to spend money on things like a new drill and we can forget other important things like the land itself,” she says.

“The investment will be paid back in 10 years through better-yielding crops and less need for herbicide applications and the crops look generally much cleaner.”

Blackgrass controls such as stale seed-beds, delayed drilling and spring cropping are all difficult on some fields, such is the extent of water logging issues – this puts a heavy reliance on herbicides.

“These cultural methods are all unviable at present as we need to get drilled by the start of October and struggle to drill spring crops early enough for cost-effective yields,” she adds.

The long-term plan is to condition the soil into suiting a direct-drilling regime while reducing the reliance of herbicides.

In recent years Mrs Hall has been rotationally revamping drainage systems across the farm.

This harvest, a crop of Grafton second wheat on a plot that was drained two years ago yielded 12t/ha – punching well above the 8.5t/ha that had become the norm.