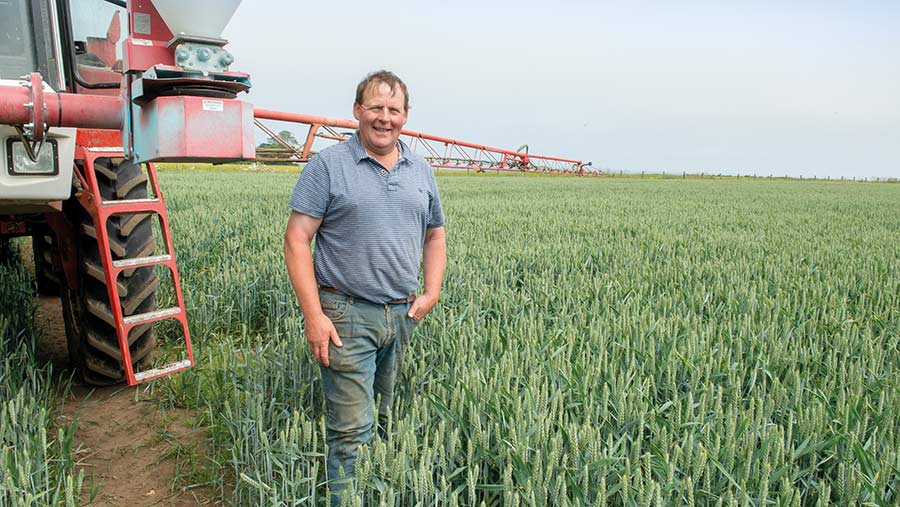 “Our location means haulage is a significant factor,” says Mr Steven, who grows a mixture of potatoes, field-scale vegetables and cereals on a seven-year rotation.

Flexibility is key in growing 40ha of seed potatoes – plus an additional 10ha for the ware market, he adds.

All markets are within about 20 miles, says Mr Steven, who farms with his brother, John, and cousins. It’s a key way of keeping transport costs low, he adds.

Potatoes go to Inchture for packing, while the vegetables and oats go to a local processor and Scott’s Porage Oats at Cupar.

Wheat goes to the Cameronbridge distillery and malting barley goes to McCreath Simpson and Prentice at Dundee.

The farm’s location brings other challenges, too. The coastal climate – and cold sea fog or “haar” – means weather windows are frequently tight, restricting the timeliness of operations during spring and summer.

“You can lose a week very quickly in this part of the world,” says Mr Steven.

Keen to improve soil health and structure, he is experimenting with cover crops ahead of potatoes and Brussels sprouts. But damp autumn weather doesn’t encourage important early growth in chopped straw stubbles.

“It’s a learning curve and we feel the soil is better if there is something in it. But we also need a cover crop that doesn’t encourage slugs, especially as we chop straw. They are the bane of potatoes and Brussels sprouts.

“We’ve done radish mixes and didn’t let it go to seed, but we’ve still had volunteers coming up in our sprout crop.

“So we’re still trying to discover the best cover crop mixture – what will most benefit the crops and soil.”

Chopping straw after winter barley for 20-plus years has helped improve soil organic matter. But it adds to the challenge of establishing cover crops efficiently, and Mr Steven’s determination to reduce his cultivations.

“Two years ago, we grew vetch and clover and lost one field to slugs. But another field sown across the dyke the next day was perfect.

“A lot of it depends on the weather – we need a good window to get something up and away.

“We’ve tried a stocks seeder unit on a Sumo and an Amazone one-pass, and they do the job but we want to move less soil.

“That means finding a drill that can sow into chopped straw and get good seed-to-soil contact.”

An on-farm demonstration of a direct drill proved successful in a dry year. But Mr Steven says a machine must cope with all conditions.

Manufacturers can be reluctant to put a drill on demo for such a short sowing window, he adds.

“We try to avoid recreational cultivation, and used to rely on the frost to break down the soil. But we’ve stopped winter ploughing because we do overwintered stubbles, which means we don’t get that benefit.

“In the spring, the soil is too wet underneath so you immediately start with compaction.

“It means we are ploughing and then going in with a bed-tiller only a week or so before planting potatoes – it’s not ideal.”

At the same time, manufacturers have got too hung up on building more strength into machinery, says Mr Steven.

“There isn’t much more you can do with a 200hp tractor than a 100hp tractor, but it is heavier and adds compaction,” he adds.

“We’re not just farming short term – we’re hopefully farming for future generations. We want to feel that our soil is improving.

Alan Steven is one of our Transition Farmers. Join them as they strive to become financially and environmentally sustainable and how they intend to overcome the challenges they face over the next five years.