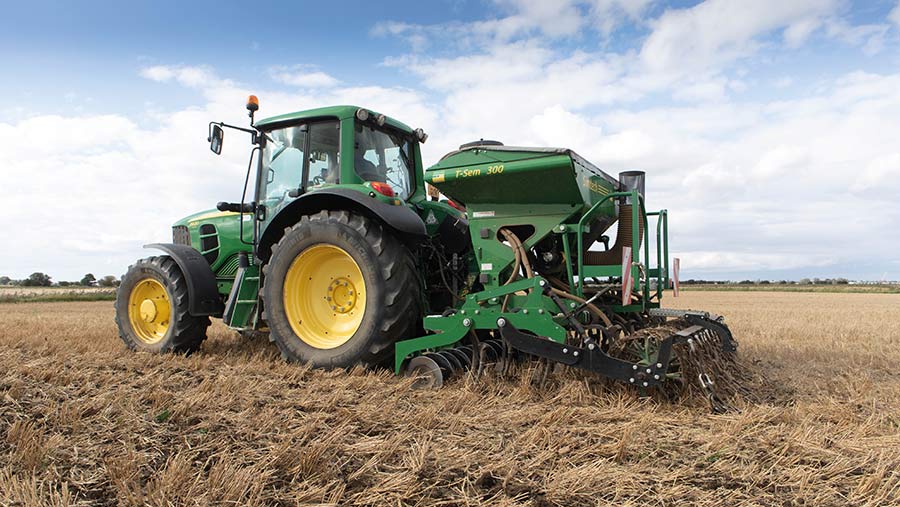 Yorkshire farmers are working together to improve the health of their soils, in a unique initiative that could play a key role in tackling the flooding risk in Hull and improving water quality.

Launched in 2018, the Sustainable Landscapes initiative has successfully enlisted more than 50 farmers who are adopting sustainable farming practices aimed at improving soil health and water quality.

The farmers are in five groups, stretching 60 miles, from Topcliffe, near Thirsk, down to Hull.

The latest group of 17, farming more than 10,000ha around the village of Kilham, nestled in the Yorkshire Wolds, are currently using cover crops to reduce nitrate leaching into the chalk aquifer.

Leading the group is farming couple Liz Sellers and Jeremy Harrison, who run Harrison Farms (Kilham), a 1,600ha arable enterprise spread across three farms in Kilham and nearby Sledmere.

The couple grow winter wheat, winter barley, oilseed rape and vining peas on a mix of heavy and lighter land, all on the chalk aquifer.

The chalk area is an important water source for Yorkshire Water, but nitrate levels are rising. The firm’s catchment manager, Andrew Walker, explains that chalk is very porous, so nitrogen will move through it rapidly.

Investigations have identified that 97% of the nitrate in the aquifer is from agriculture over the years.

To tackle the problem, Yorkshire Water has built three remedial plants – the most recent cost £9m to build and they are expensive to run, he says.

“Kilham is trending upwards, so if we don’t reduce what is going into the aquifer, we would have to build a plant here, too.”

But the high cost means other options are now being explored. One would be to legislate to restrict nitrogen use further, as the area is already in a nitrate vulnerable zone.

However, following on from previous successful Yorkshire Water initiatives, the company is instead taking a more positive approach, working with farmers.

The group was launched in June 2021, led by Ms Sellers and Mr Harrison. Being a geography teacher, she could see the wider picture on water quality and the need to “prepare soils for the greater extremes in weather that we are experiencing”.

So this summer, the group started out with cover crops, with each farmer planting 10ha, resulting in a total of 1,700ha. Out of the 17 farmers, only two have ever grown cover crops before, she says.

For the couple, the cover crops worked well after peas. The cover crops were drilled after the viners harvested the crop last June, being part of the Swaythorpe Growers group.

“We got the crop in the ground and left it for nine weeks before drilling the following wheat in September.” It grew quickly and they were impressed by the amount of growth.

Paul Rhodes, director of consultancy company Future Food Solutions, points out that some of the cover crops captured nearly 400kg/ha of nitrogen compared with a more normal 250kg/ha. This is because of the high N trash from vining peas.

About 20-30% of the nitrogen in the cover crop is then released in the first year and effects can be seen three to five years after, he says.

Next year, the group is planning to introduce the nitrogen super league , using the N Tester to improve fertiliser efficiency. The aim is to help farmers test out new technology to make better use of fertiliser.

Based on the positive learnings from other groups, Mr Walker is confident they will see a reduction in nitrate going into the aquifer within the lifetime of the project.

The original three groups of farmers are now into year four of the initiative, with the extensive uptake of measures such as cover cropping and switching to ferric phosphate slug pellets across 22,000ha.

Andrew Walker recalls that they were hotspot areas for metaldehyde. “But rather than focus on this issue and risk alienating farmers, we looked wider at helping farmers improve their soil health, too.”

What is Sustainable Landscapes?

It is a collaborative, landscape-based programme initiated by Future Food Solutions in partnership with Yorkshire Water

Getting soil in good health brings other benefits, such as less soil erosion, so reducing the amount of sediment entering rivers and increasing organic matter can increase the water-holding capacity of soil, thereby reducing flooding risk.

Cover Crop of the Year

This competition has been running for three years and the overall winner for 2021 is Neil Chester of Fern Bank Farm, Dishforth, who represented the Topcliffe innovation group. He achieved 85t of biomass.

He said: “One of the main reasons why this was such a good cover crop was because it was following winter barley and we were able to get it drilled in July, giving it a lot of time to grow.” 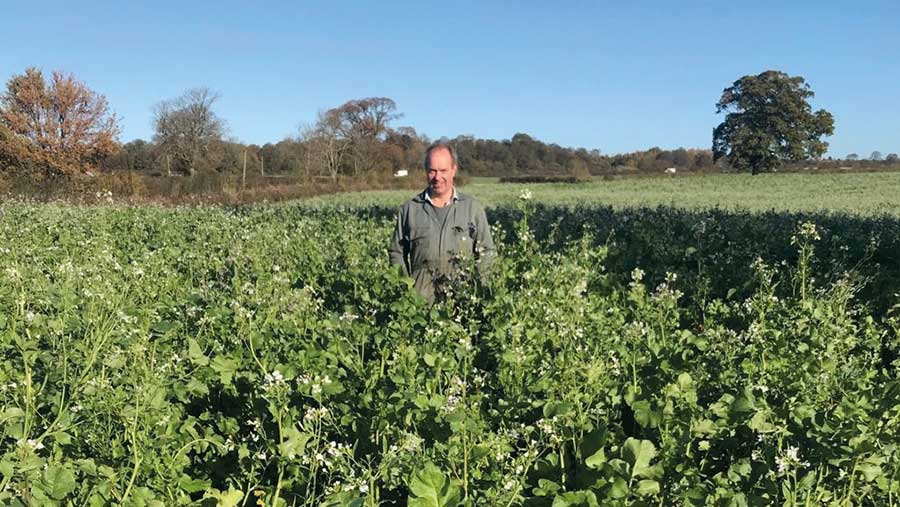 This is an initiative where farmers are encouraged to try using an N tester, so apply fertiliser according to crop needs.

It helps farmers to understand how nitrogen moves in the soil, says Steve McCann, of Future Food Solutions. Typically, farmers see nitrogen-use efficiencies of 40%, so that means 60% isn’t used.

“In the league, we are seeing up to 87% nitrogen-use efficiency. So going from 40% to 80% can bring big savings in fertiliser use, as well as having a significant impact on carbon footprint.”

Farmers taking part can join a new carbon scheme, enabling them to earn money from the measures they are adopting, which increase soil carbon.

Located five miles to the south-west of Thirsk and adjacent to the River Swale, the Topcliffe Pilot Area is part of the catchment that eventually flows into the River Ouse, entering the North Sea via the Humber estuary.

Located north-west of York, the Shipton by Beningbrough Pilot is on heavier land than Topcliffe. The pilot area is located close to the River Ouse.

Situated to the south-east of York, the Elvington Pilot Area is equidistant between the River Ouse to the west and the River Derwent to the east.

The pilot area is within a zone of particular importance in terms of surface water management; Yorkshire Water has treatment facilities four miles away at Elvington, where it extracts water from the River Derwent prior to treatment and onward distribution elsewhere in Yorkshire.

A fourth group was established next to the river Humber in 2020, the first year in partnership with Birds Eye peas.

Farms growing vining peas tend to plough in the autumn and fallow over the winter prior. But this is prone to erosion and other losses before drilling in February/March, says Steven Cann, director at consultancy company Future Food Solutions. 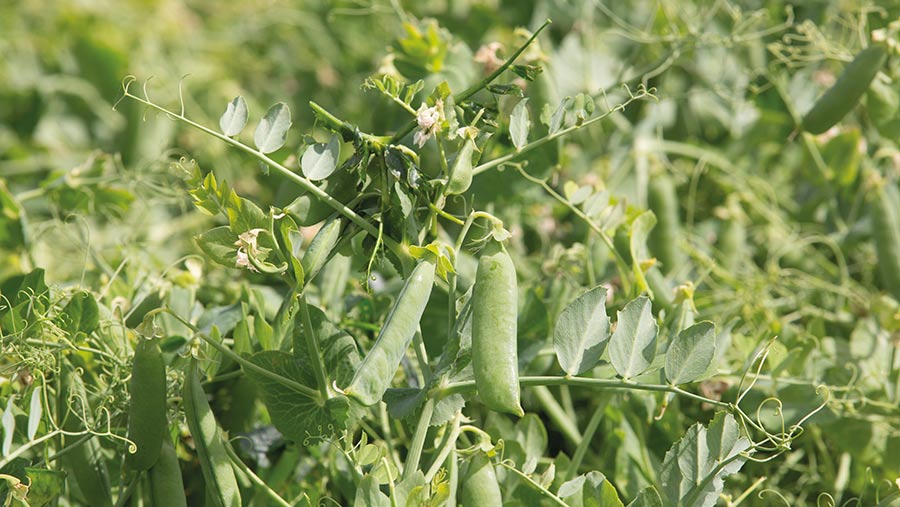 The farmers are now looking at cover cropping before peas to reduce erosion and then again after the crop to mop up nitrogen.

They are using a seed mix of phacelia, camelina, oil raddish and oats. After harvesting peas, up to 390kg/ha of nitrogen can be captured by the cover crop, as pea trash is high in nitrogen, he explains.

Another aim of the Humber group is to hold more water in soils, by increasing soil organic matter.

Andrew Walker of Yorkshire Water explains that Hull is unique in its sewerage system, as storm water goes into the system and a lot of investment is currently being made, as much of the city lies below the high-tide line.

To reduce pressure on the system, the company is looking at keeping water back over a wider area instead of having a sacrifice area of farmland that is allowed to flood.

Mr Walker says there is 500,000ha of arable land in Yorkshire. So if farmers increase their soil organic matter by 1%, it equates to holding an extra 200t/ha of water. That is a massive amount of water that can be held, he says.

Paul Rhodes, director of Future Food Solutions, adds that they have seen soil organic matter increases of 3-6% on some farms over an eight-year period in the group, using a combination of measures including cover cropping, chopping straw, companion and cover copping.