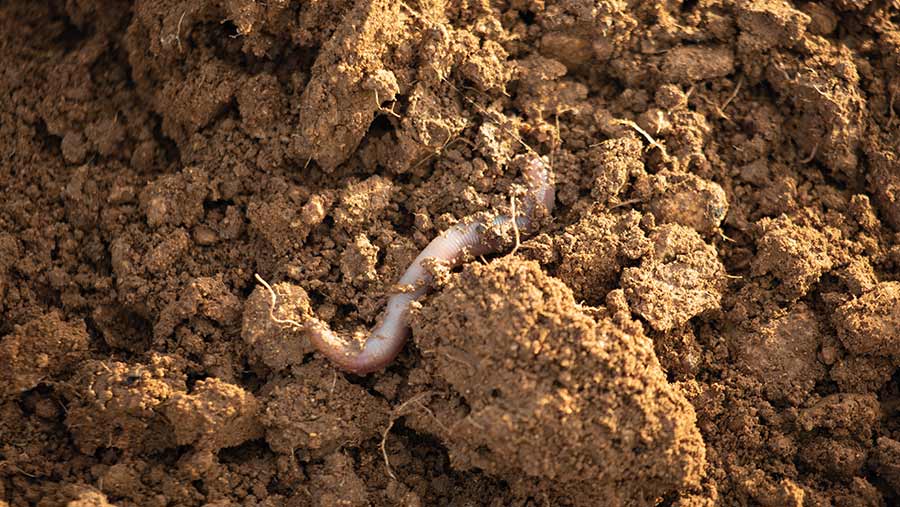 A new way to quantify soil health allows farmers to measure any improvements over time, as well as identify potential problems that could be holding yields back.

Until now there has been no simple tool to enable farmers to benchmark their soils and monitor any changes over time.

“Farmers knew they had to improve soil health, but they didn’t know how to measure it or keep track,” says Liz Stockdale, Niab Tag’s head of farming systems research.

See also: Advice on using metaldehyde up safely before ban

So to help farmers assess soil health, the Soil Biology and Soil Health Partnership – funded by the AHDB and British Beet Research Organization and led by Dr Stockdale – has spent the past five years combining the key physical, chemical and biological aspects into a simple scorecard .

One of the first tasks was to review what could be measured and how practical it was to measure it.

A broad range of indicators (physical, chemical and biological) has been assessed by the research team and whittled down to a handful that are important in getting a handle of soil health.

The result is the Soil Health Scorecard, which uses a simple traffic light system to rate key soil health indicators based on benchmark figures.

What does the Soil Health Scorecard include?

The scorecard uses seven different measures that researchers deemed essential in defining the health of a soil.

For each of these factors, there are benchmark figures that determine if the result is green, amber or red.

Green means a typical or optimum result, amber means review and red means that further investigation is required, with action taken if needed.

For some measures like organic matter, the benchmark figures will vary according to soil type (light, medium or heavy) and the region of the UK.

Therefore, a red figure means the OM is lower than the average for that soil type and region. These benchmarks are due to be published in the coming weeks.

How to use it

The soil health assessment is distinctly different to soil assessments for nutrient planning or tillage, so should be treated separately says Dr Stockdale.

One challenge with any soil testing is to get a representative sample so that any changes between years are down to changes in soil rather than location.

She says this is now easier thanks to geolocation using a phone – for example with the what3words app.

This means when you come back to do assessments in three to five years’ time, you are back to a similar spot within 4m – so pretty much the same place, making it repeatable. What is changing, then, is the soil itself.

A good starting point is to look at yield maps and think where you want to locate sampling points. “You want it to be representative not random,” she says. Perhaps it’s areas that are performing well or badly, and this will help explain why.

You will need to keep the geolocation data safe, for instance backed up on the cloud in case you break your mobile phone.

For these assessments, she uses a bucket along with a trowel, worm ID card and visual evaluation of soil structure (Vess) scoring sheet. She places the bucket in the chosen location and will then sample within a 5m circle of the bucket.

For the Vess assessment, farmers need to dig three pits with a spade. They can use a typical 20cm spade or a smaller one, but figures like earthworm counts will need converting to the standard volume.

Use the spade to cut three sides and then lay the block on the ground. Then inspect the soil from the side that wasn’t cut by the spade, as smearing can confuse things.

The Vess assessment includes feeling how easily the soil breaks up. For example, is there any compaction and is there anything that is limiting to crop growth?

Dr Stockdale also advises taking a picture of the second or third pit as a reference for next time.

In addition, the scorecard requires earthworm count for each pit. She advises carefully checking the rooting zone for worms.

“About 30-40% of worms are in the rooting zone on arable land, or even higher with cover crops, so you need to find them.”

It takes about 15-20min to do the three blocks, but it will be longer in grassland as there are more roots to tease the worms from.

For the soil testing, she advises taking 10-15 samples from the site using a trowel, mixing them in a bag and then sending for analysis.

Organic matter, pH, P, K and Mg levels are required for the scorecard.

It is worthwhile for farmers to get a microbial activity measure done at the same time too, as there will eventually be benchmark figures included in the scorecard.

Soil needs to be moist, but not wet, to do the Vess assessment, and needs to be warm for worm activity.

The ideal time is when soils wet up in the autumn, which may be around early November, depending on the weather.

It can also be done in spring, but it’s more tricky getting the timing right as soil dries quite rapidly, making the window shorter. This is why autumn is preferable.

However, Dr Stockdale warns that farmers cannot compare worm results from autumn and spring, as they will be different.

She acknowledges neither timing is ideal, each clashing with either the key cultivating or drilling periods. “But if you leave it to winter, you will get rubbish results,” she warns.

“It may be a drizzly day when you can’t drill, but it’s still OK to carry out the soil assessments.”

The Soil Health Scorecard approach is being tested in trials and it has successfully shown changes in soil health when applying manures and ploughing.

To test the approach, a network of seven experimental sites has been established. One trial at Loddington is looking at tillage, another at Adas Boxworth has focused on drainage, and a long-term trial at SRUC is looking at pH.

One of the researchers involved, Adas principal soil scientist Anne Bhogal, says she is a fan of the scorecard.

“The approach has picked up differences, showing you don’t need to do anything fancy to get an indication of effect on soil health.”

At Loddington, the field was no-tilled for seven years and researchers ploughed up some strips to see the impact. The ploughing dramatically reduced blackgrass numbers.

The scorecard did show a decline in worm numbers. But after three years, numbers had recovered, says Dr Bhogal.

The Vess score did increase after ploughing, as there was a 15cm compacted layer that it tackled.

At Harper Adams, the approach was used in a trial looking at the addition of organic matter.

One observation was that there were more greens where compost and manure had been applied, showing that the light-textured soils responded well to the application of organic materials.

This approach also showed that soil health had decreased in the four years of arable cropping, with organic matter and earthworm numbers declining.

The Soil Health Scorecard is due to be launched later this year. For more information, visit the AHDB Great Soils page