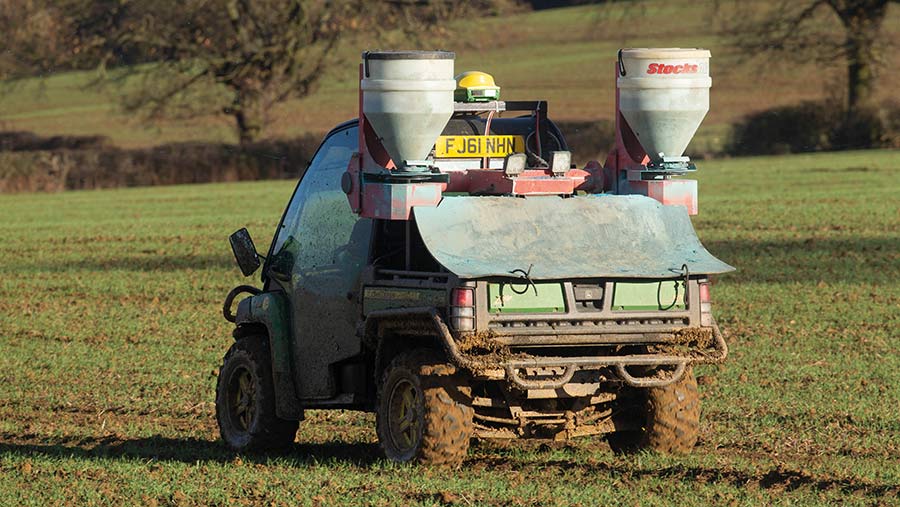 Arable farmers are being urged to follow Metaldehyde Stewardship Group (MSG) guidelines closely to avoid polluting water in the product’s last season of use.

There is uncertainty about exactly how much product remains on farm to use up following the slug pellet’s loss of authorisation.

No further supplies are being manufactured for the UK market, but distributor stocks can be sold and used up until 31 March 2022.

Richard Reynolds, senior agronomy adviser for Anglian Water and the Water UK catchment network representative on the Voluntary Initiative, says feedback from agronomists, farmers and distribution suggests 40-60% of farms have some stocks of metaldehyde.

“But what we don’t know is whether that is one bag or one pallet on each farm,” he says.

In a worst-case scenario that could lead to significant spikes of metaldehyde in water supplies, which the water companies are unable to remove through raw water treatment.

The challenge is that this is the last year for it to be used legally. Farmers face the choice of using it or paying to get rid of it, so there is little incentive to not use remaining stocks, Mr Reynolds says.

“But metaldehyde really matters this season, and we need the agricultural community’s help in getting it right. If you don’t have to use it, please don’t,” he says, urging farmers to follow the MSG’s guidance.

Most growers are likely have both metaldehyde and ferric phosphate available, so remember best practice when deciding where and which to use.

“Keep the buffer areas and use metaldehyde in the middle of the field rather than the edge,” he says. “Ultimately, metaldehyde only becomes a problem for the water industry when it leaves the field.”

Metaldehyde slug pellets must only be used as part of a wider integrated pest management programme, stresses David Cameron, the MSG chairman. “That helps minimise slug infestations and reduces the need for treatment,” he says.

“Factors such as soil and stubble management, planting methods, weather, trapping and monitoring should all be considered as part of slug control programmes.”

“Think ‘soil, slope and stream’. Your field’s soil type, topography and proximity to a watercourse are all key to understanding whether applications could impact drinking water quality.”

What’s at stake for the water companies and for growers

Water companies operate under an undertaking to use catchment management to manage metaldehyde levels to below the 0.1ug/litre standard set by the Drinking Water Inspectorate.

“Our understanding at the moment is that we need a minimum three years’ data of a declining or stable trend of metaldehyde in water to remove that requirement for an undertaking,” Richard Reynolds explains.

“If we get a bad year and a failure, does that reset the timeline and there is an additional three years we need to wait?”

That is important, particularly for Anglian Water, he says, because water covered by an undertaking is essentially conferred to be polluted.

“Legally we can’t move polluted water to an unpolluted area, and we are currently building a £650m pipeline that connects north Lincolnshire with Essex to provide more resilience. Our worry is that we won’t be able to supply water into that pipeline if we can’t get out from underneath our undertaking.”

He also warns that a failure of catchment management could be problematic for farmers.

“We’ve been funded to use this approach. If it fails, the water industry is likely to ask why its investment hasn’t landed, and why should it spend money on any other initiatives.”

So it is also about showing the credibility and value of the engagement work that has happened, so there are resources to hit other challenges, such as bentazone and blackgrass herbicides.

“It is a little bit of a watershed case on testing the resilience of catchment management,” he concludes.