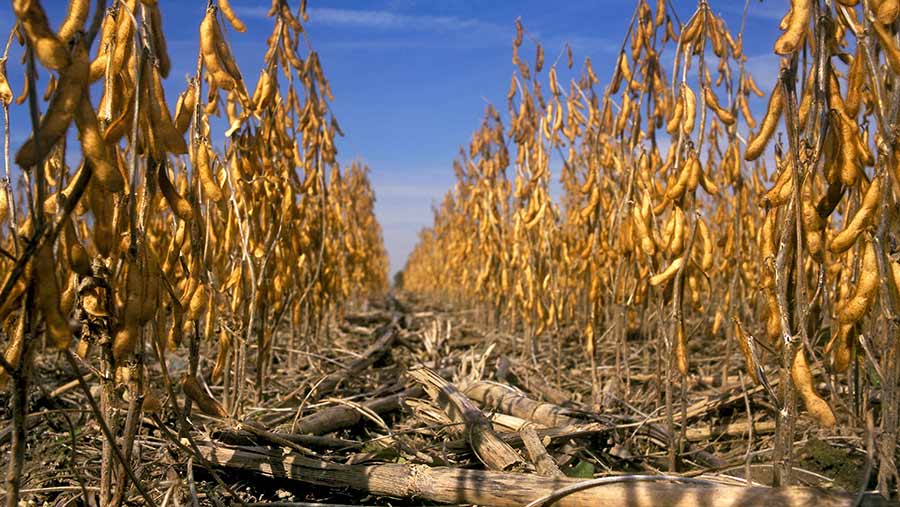 Heavy soils, late harvested crops like soya and a yearly rainfall exceeding 1,000mm is the perfect combination for compaction, which is why southern Ontario farmers focus so much on soil health.

This corner of Canada has a unique climate, being surrounded by the Great Lakes. Rainfall is typically 800-1,000mm and summers tend to be humid, so they don’t suffer the droughts seen in the US mid-West.

In fact, farmers don’t grow spring malting barley because of the risk of sprouting in the ear.

Spring and autumn are particularly wet, which is why tile drainage is so vital for winter wheat growing. But there are periods of drought, so soil water conservation is also important.

Compaction is not the only challenge – some soils are prone to water erosion and some areas near the Lake Huron can also suffer wind erosion.

One way to improve soil health is to adopt no-till systems and Canadian farmers are ahead of their UK counterparts, with many farms turning to this technique in the 1980s.

We visited three Ontario farms to find out how they are improving their soil health. 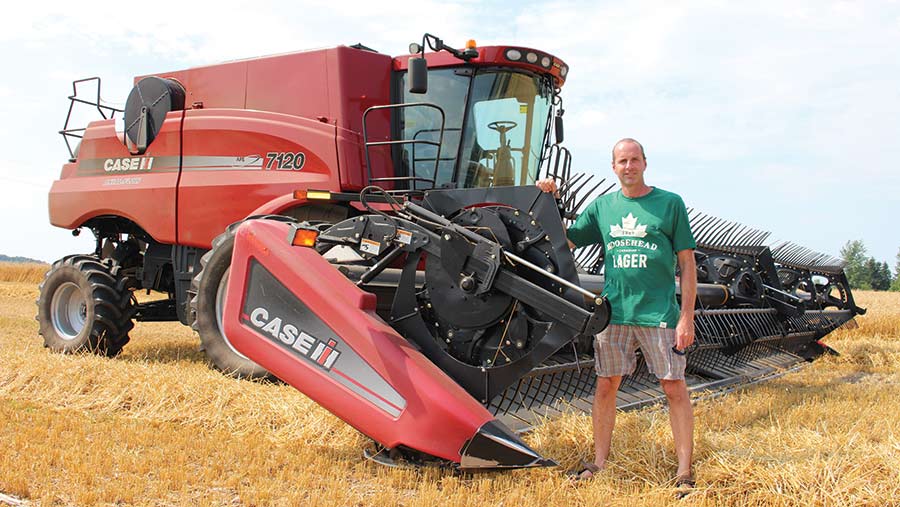 A combination of cover cropping and reduced cultivations has led to savings of £77.35/ha for one award-winning soil farmer.

His rotation is maize, followed by soya and wheat, roughly equating to one-third of each. The beans tend to be grown in fields that have been drained, so they require more intensive cultivations to level the soil.

He farms mostly clay loam soil, with some heavy clay caps and strips of gravel running through.

Compaction is an issue – as well as erosion – so he has grass buffer strips along waterways to prevent soil from entering them.

Being about less than 15 miles from Lake Huron also means the farm experiences heavy winds. “We can get wind erosion, even on the heavier land.”

“So you need resilient soils that are able to let rain flow through the profile,” says Mr Denys. Then in dry periods, there is a need to retain moisture.

There is also a need to avoid compaction so that roots can get down to access moisture at depth.

Cover crops are a great way to hold moisture and is something that he has introduced to complement the no-till approach.

“Dad started no-till wheat in the late 1980s and then, in the early 1990s, we moved to no-till soya beans and strip-till maize.”

Mr Denys puts manure from his pig enterprise, finishing 7,000 pigs a year, onto the established cover crop which sucks up nutrients.

“The radish and turnips are great for sucking up nutrients that are then released the following spring to feed the maize crop.”

In the autumn, he returns to strip-till the area to create a seed-bed, apply phosphorus and potassium and the uncultivated areas are kept green throughout the winter.

“If it looks like it will turn bad, we will go early, but we try to leave as late as possible to let roots do their thing.”

Being raised, the cultivated strips dry out quicker in spring and he can get on the ground a couple of days earlier than conventional.

“The combination of raised areas and green crop in between means we don’t see erosion in winter.”

Cover cropping has been deployed for seven years and he is now seeing soil benefits.

“Soil is looser and easier to work in the spring, and it’s a way to make better use of swine manure and minimise leaching.”

In spring, he sprays off the cover crop and runs through the strips again, using the ultra-precision offered by RTK Autosteer with the 12-row maize drill on 76cm rows.

He regularly tests soils and with no-till farming, he has halted the decline in organic matter.

Cover cropping was the next step and he believes this is starting to add organic matter. In the next five years, he hopes to see levels rise, which are currently about 3%.

He believes crop residue breaks down more rapidly with cover crops by getting the soil biology working well.

Yields have also improved and he is above average for all crops achieving 12t/ha for maize, soya at 3.4t/ha and wheat at 6.7t/ha.

“Crops also seem not to be stressed like they were.”

But the big benefit for Mr Denys is the saving of £77.35/ha, through using less fuel and fewer man hours.

Previously, he used a disc ripper, which deep cultivated soil. Maize sometimes had two passes (autumn and then in spring) or one pass followed by a strip refresher (tickles the surface).

Looking ahead, his aim is to further raise wheat yields. “Our goal is to get an average [wheat yield] above 100 bushels an acre (6.7t/ha) for wheat.”

Jim Denys was awarded the Soil Champion award earlier this year by the Ontario Soil and Crop Improvement Association (OSCIA).

Jeff Barlow is getting a 22-80kg/ha saving in nitrogen fertiliser use with his clover cover crop. 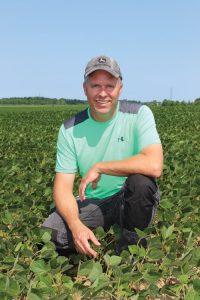 Farming 1,700ha of cropping including winter wheat, maize, corn and soya, he spins clover seed into the bottom of his wheat crop in spring, when it is still low.

Come harvest, the clover is already there and grows in the stubble, then he ploughs it in October/November.

“This gives time for the clover to maximise its biomass and roots. The roots help open up soil,” says Mr Barlow.

It also helps provide nitrogen (N) for next year’s crop, which contributes to the savings on fertiliser applied to the following corn crop.

In fact, Mr Barlow believes he is still getting benefits in the soya crop after maize.

“We are seeing longer-term benefits of having wheat and a cover crop in the rotation.”

Mark and Sandi Brock have seen a 20% yield increase through their focus on improving soil health by growing cover crops and applying liberal amounts of manure.

The couple farm 650ha of arable cropping plus Mrs Brock runs a 600-ewe flock, producing lamb for the local market. 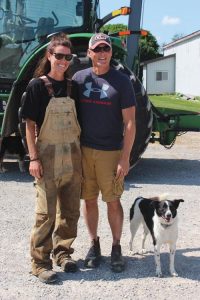 Mr Brock puts the yield increase down to their cropping system, which they have developed over the years.

The key change has been the introduction of winter wheat and cover crops in the rotation.

Soils are mainly clay loams with some areas of gravel.

Drainage is essential when growing wheat to cope with the wet periods in autumn and spring.

“Growing wheat on undrained farms can be tough as crops will not come through water well,” he says.

“But it’s not just excess water, there are very dry spells too, which means soils need to be resilient.

“We can get large changes in conditions from exceptional amounts of water to a deficit in just three weeks.”

The no-till journey started more than 30 years ago. “Dad was an innovator and he was one of the first in the area to buy a no-till drill in the late 1980s, as there were grants available to help farmers retain soil,” explains Mr Brock.

“So we started no-tilling wheat and then decided to drill soya into corn stalks and a lot of neighbouring farmers wondered what we were doing.”

For maize, they moved from full-width cultivations to strip tillage, cultivating part of the area.

“It provides a warmer zone for corn plants to get established and helps manage residue,” he says.

The couple run a three crop rotation of maize followed by soya and winter wheat, with the cover crop after wheat.

Cover crop contains 12 species including buckwheat, oats and clovers. “We blow seed on and harrow in with a very shallow cultivator.”

Sheep manure from the 450-ewe sheep enterprise, plus poultry litter from another family farm, are applied to the established cover crop. “Buckwheat and oats are good for taking advantage of the nitrogen.”

Mr Brock has seen a 2% difference in soil organic matter in areas where he has adopted the combination of less tillage and having three crops plus cover crop.

“One benefit of the higher organic matter is that we are seeing soils loosen up and become more mellow.”

Microbial activity is picking up and maize stalks are breaking down more quickly, which is useful for the following soya crop.

Looking ahead, his aim is to leave the farm in better shape than he inherited it. “Soil tests show that we are seeing improvements.”

However, he adds: “We are only halfway through the story and are still developing the system.”

One area he is looking to tweak is wheat fertiliser. His aim is to move from liquid to solid and adopt a more European approach, with multiple splits to drive wheat yields even higher.

Farmers Weekly would like to thank Grain Farmers of Ontario, for making the trip possible. The organisation is levy funded with the aim of marketing and promoting grains grown in the province. It also lobbies the regional and federal governments.