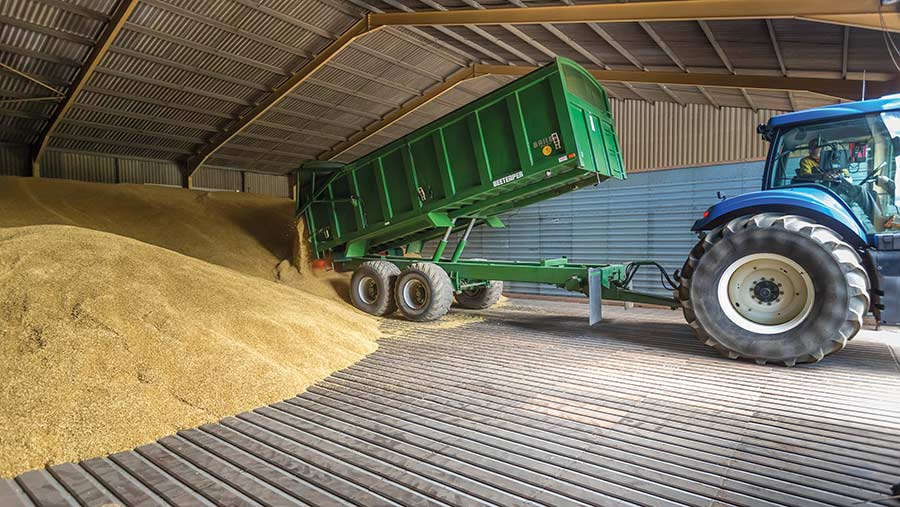 With showery summers predicted to become more common, now is a good time to appraise grain-drying facilities and reinvest where necessary to help deal with any extreme seasons to come.

Arable farm businesses have focused on increasing combine capacity over recent years, sold on the theory that getting the crop into the shed quickly helps minimise risk of yield and quality losses when conditions become tricky.

This has, in some cases, come at the expense of adequate investment into storage and drying infrastructure, with a significant gulf between the best- and least-equipped across the UK.

Where is substantial drying capacity important?

Charles Garrard, associate director at Strutt & Parker, says farmers who have struggled with wet grain over the past two seasons have had their minds sharply focused on any shortcomings.

These struggles may have been caused by a drying facility that is no longer fit for purpose, or if a farm is reliant on central storage, where escalating drying costs can make a serious dent in returns.

He sees this winter as a good opportunity to appraise drying facilities and ask whether they are capable of dealing with the more frequent and intense summer rain  in a cost-effective way.

“It certainly won’t be a bad investment to have your own on-farm drying store, or to upgrade what you have. It will give you much more control at harvest, and how you can market your grain.” 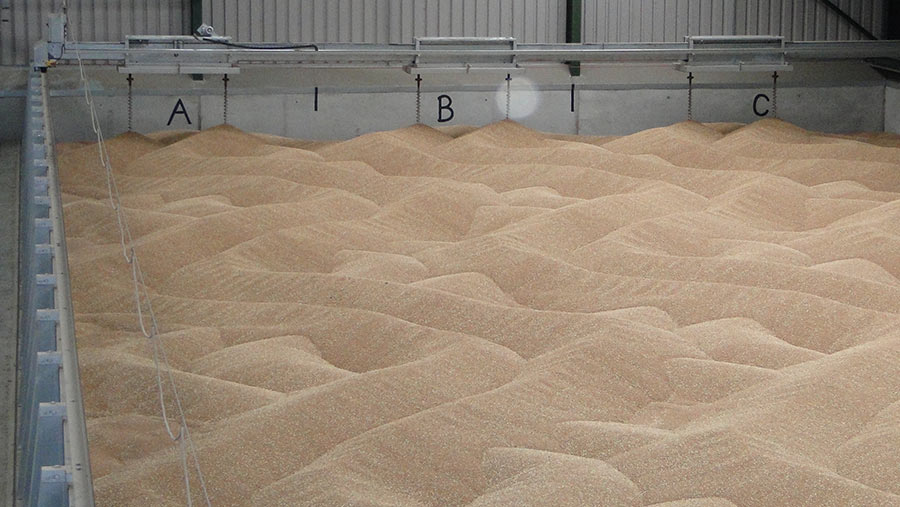 There are plenty of existing continuous-flow dryers – likely to have been installed in the 1970s or even earlier – that are still operational on farm, along with wet grain intake pits or bins.

David Perry, managing director of Devon grain-drying equipment specialist Perry of Oakley, says some may be perfectly serviceable, but would benefit from an automation system and/or more efficient burners and is currently refurbishing three or four each year.

Most older systems are run manually from hard-wired control panels and require an attentive operator to take grain moisture readings at intake and outlet and adjust accordingly.

Aside from large central stores, which will have a full-time man on the dryer and less requirement for automation, on-farm continuous-flow dryers are often monitored by grain cart operators between loads.

A system like Perry of Oakley’s PLC Drier Control uses a number of sensors to monitor dryer performance, then automatically adjusts throughput to hit a preset target grain moisture content.

“The dryer controls can also be accessed with a smartphone, so you don’t need a man to be around all day and it gives you the ability to run the dryer through the night,” he adds.

This reduces labour costs, but also improves a dryer’s operational efficiency and prevents overdrying which, according to Charles White of Yorkshire-based Allmet grain dryers, has the greatest effect on drying costs.

He says when reducing wet wheat to 14%, if you overdry to 13%, it increases drying costs by 30% through increased energy use and weight loss.

Furthermore, as grain is moving through the dryer unnecessarily slowly, dryer capacity also falls 16%. Where overdried to 12%, costs increase by a massive 50%.

“The figures on overdrying are frightening and, if you are handling large tonnages, it can result in a serious hit on the bottom line. 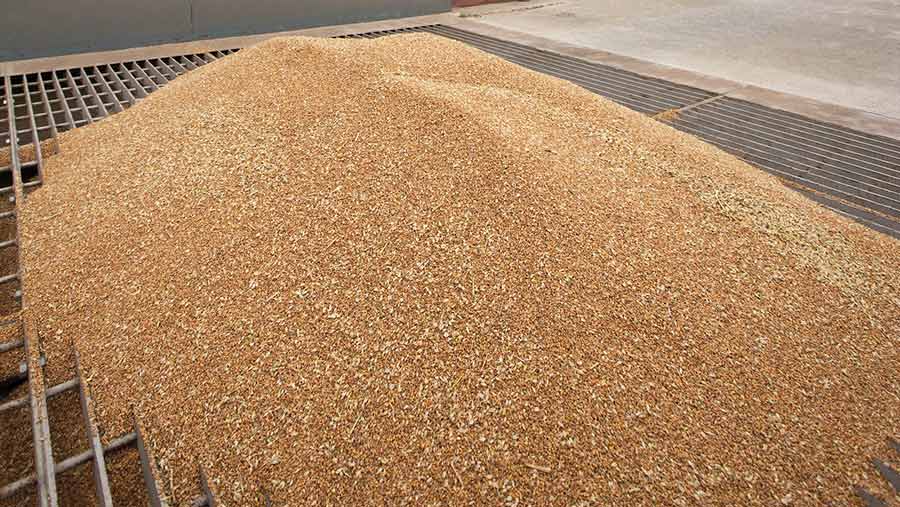 “By installing an automated control system like our Allmet Intelligent Dryer Control, it’s the area where growers can save the most money when using a continuous-flow dryer,” explains Mr White.

In addition to automation, Mr Perry says fitting inverters to the fans which force air through the crop in older continuous-flow driers will allow operators to run them up to 30% slower.

This is advantageous in lighter crops such as oilseed rape, as these can be prone to “lift-off”, whereby the crop is blown and bounced off the cross-conveyors in the dryer.

Where a continuous-flow dryer can’t be brought into the 21st century, or where a business is looking at starting from scratch, a new fully automated drying store would be a good future-proofing investment.

Many older units work on the crossflow principle, where a series of chains move a layer of grain through the dryer, forcing warm air through as it goes.

However, the latest systems offered by Allmet and Perry of Oakley work on the continuous-mix-flow principle, which constantly agitates the grain throughout the process and warm air is drawn through, rather than pushed.

“This results in a much more efficient drying process. When if you compare a new Allmet mix-flow system to an old cross-flow, the new one uses half the fuel and half the electricity,” says Mr White.

He advises that any new continuous-flow dryer should be specced to farm size and the crops being dried.

There also needs to be plenty of wet grain storage installed with any high-capacity dryer, whether in the form of an intake pit or wet bins, which will reduce the need for double handling that can increase labour and machinery costs.

What other tips can help improve drying efficiency and reduce costs?

While continuous-flow dryers have their advantages, many have drying floor setups, as there is no potential pinch point for trailers, which can continue to tip as long as the combine is moving.

These consist of a raised floor, a tunnel, fans and burners fuelled by propane. The fans mix ambient air and heat to take out the humidity and blow dry air through the crop, known as humidity drying.

Lewis Harvey, managing director of Bury St Edmunds-based Harvest Installations, says that in many existing stores, burners are either on or off, so will benefit from the latest automated systems.

Retrofitting modulated burners with a constant humidity controller (CHC) will monitor outside relative humidity and only switch the burners on when ambient air is damp and needs drying.

For example, to dry winter wheat down to 14%, the air blown through the crop should have a relative humidity (RH) of 68. If the RH outside is at or below 68, the burner is switched off and can facilitate significant fuel savings.

“Our system also provides text alerts if any fault occurs, so you can effectively set your target humidity, forget about the store and get on with other jobs,” says Mr Harvey.

It is said that drying floors are only suitable in drier areas of the UK, but Mr Harvey argues the system can cope grain at up to 24% given the correct setup and operation.

Rather than RH drying, which is suitable for grain up to 18-19%, a temperature drying process is used for grain at 20% or more on drying floors.

This involves setting burners at 45C, which raises the temperature of the crop to 27C during the day. It’s then left to sweat overnight before blowing cool, dry air through it the following morning.

Although temperature drying on a floor will be slower than using a continuous-flow dryer – about 1.5% every 24 hours – it can be effective at drying large quantities of grain for a relatively low operating cost of £1/t for every percentage point of moisture.

“Grain stirrers are strongly advised for temperature drying to prevent capping, along with larger burners, so requires higher upfront costs,” he explains.

So, how much is an investment in a new drying system likely to be?

Figures from Strutt & Parker – which are a guide only and based on real examples – suggest a top-end 2,000t store with drying floor, grain stirrers and all associated equipment could cost about £550,000.

However, Mr Garrard notes that for a more basic spec and infrastructure the price could drop to below £500,000.

He adds that there are various options for financing investment in a new drying store, including a mortgage from a company such as the Agricultural Mortgage Corporation (AMC), which offers competitive rates often not matched by high street lenders.

There are also hire purchase options for kit like a continuous-flow dryer, which would require a 10% deposit. Buyers would typically be tied into a five-year repayment plan at about 5.4% APR.

Finally, it may be possible to get an unsecured loan, but this would depend on the customer’s credit score, and interest rates might not be as attractive.

What role does renewable energy have in grain drying?

With the possibility of a carbon tax on the horizon, the days of fossil fuel-guzzling drying facilities could be numbered, and farms should consider renewable heat options.

Once the UK leaves the EU, the government plans to replace Brussels’ emissions reduction schemes with its own carbon tax, which will have a significant effect on how agriculture uses fossil fuels over the next 10 years.

Strutt & Parker’s Charles Garrard says there is talk in the energy sector that the tax could be anywhere between £25-£75/t, so it is possible a business burning 100,000 litres of propane to dry grain each year could face additional costs running into thousands of pounds.

However, the RHI still provides good returns for the right businesses and could provide a vehicle to invest in renewable heat infrastructure, guarding against any significant carbon tax rises in the future.

The scheme remains open to new applicants until March 2021, and will run until 2041, potentially yielding 20 years of support payments for projects that typically have a 10- to 12-year payback.

As the government plans to replace the RHI with a Clean Heat Grant, which is much less favourable to farms and estates, getting in an application before the deadline could be a sensible option.

Retrofitting renewables
In terms of installation options, the cost of retrofitting renewable heating systems to existing drying floor stores can be more troublesome – and not as efficient for drying grain – than if incorporated into the design and construction of a new store.

Perhaps the most viable retrofit option would be converting existing continuous-flow dryers to run off biogas where a farm has a reliable source.

For new stores, installing renewable heat is a much easier proposition, with straw or woodchip-fuelled biomass boilers installed to heat water, which is pumped into a coil system within the air ducts to warm the air and dry grain.

For a 2,500t store, a biomass boiler would add about £250,000 to upfront cost, but once up and running, energy production costs are low if feedstock can be sourced on-farm.

However, if either wood or straw is sourced off site and requires haulage, costs start to outweigh any benefits.

“In all cases, careful planning and budgeting is required before a project like this is undertaken, stress testing the possible scenarios,” adds Mr Garrard.