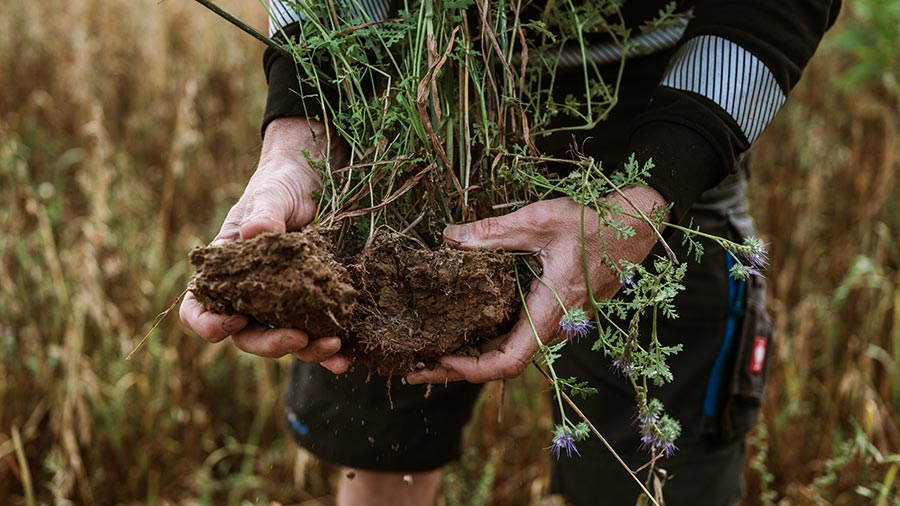 The finalists of the Soil Farmer of the Year 2021 competition are showing how soil health can be improved. We talk to the joint winner, Tom Sewell, and a runner-up, Antony Pearce, to find out about their approaches.

A low-cost, low-risk approach is being taken by Soil Farmer of the Year Tom Sewell, who puts soil health at the heart of his farming system.

Farming in partnership with his wife and parents near Maidstone in Kent, Mr Sewell does as little tillage as possible as he works with 15 different landowners across 10 parishes, farming just over 600ha of combinable crops.

See also: 10 learnings from more than 21 years of blackgrass trials

With new land coming into the business all the time – much of which was previously in orchards – he makes effective use of compost and living roots to improve soil structure and function, only using a low disturbance subsoiler or shallow disc roller where necessary.

Otherwise, fields are direct drilled, often after a multispecies cover or catch crop designed to introduce diversity and keep soils improving, with drilling on the green working well in both autumn and spring when conditions are right. 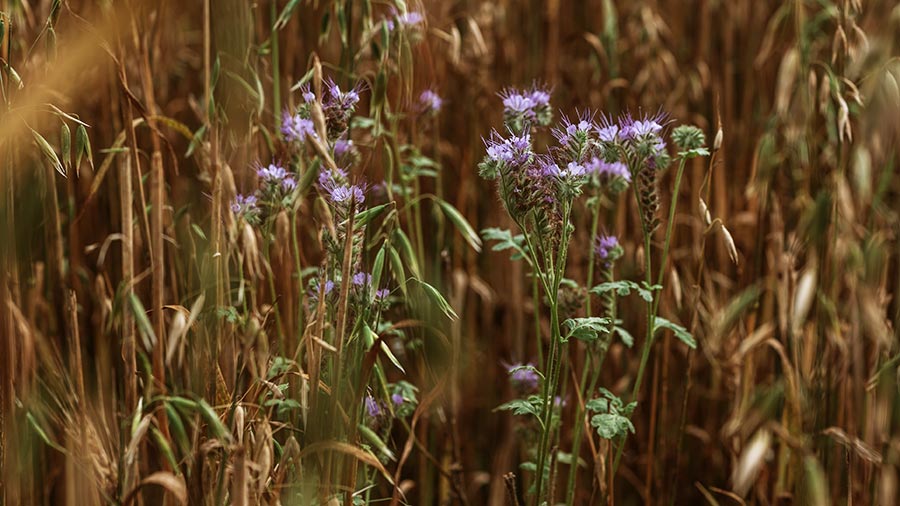 Straw is chopped and stubbles are cut as high as possible, which along with the other measures he employs, mean that soil organic matter levels are on the up.

Earthworm counts indicate that there are as many as 12m worms/hectare, helping to keep soils active.

“We run a simple system and have been following regenerative principles for seven years,” he says. “There are lots of things we don’t do, which save us time and money.”

By that, he means not using insecticides for the last four years or any P and K bagged fertilisers for over 20 years, as well as eliminating seed treatment use and cultivations.

In addition, farm-saved seed is standard practice and nitrogen fertiliser use has been reduced by 10% every year for the last three years.

This has been achieved by including a carbon source in with every liquid nitrogen fertiliser application, helping to feed and look after the soil biology as well as improving both the efficiency and performance of fertiliser.

A no insecticides policy is now in place across the farm and with wheat drilling taking place in October, barley yellow dwarf virus hasn’t been an issue.

First wheats are yielding over 10t/ha in a fluid rotation, which aims to have 50% wheat and also includes winter beans, winter barley and spring oats. 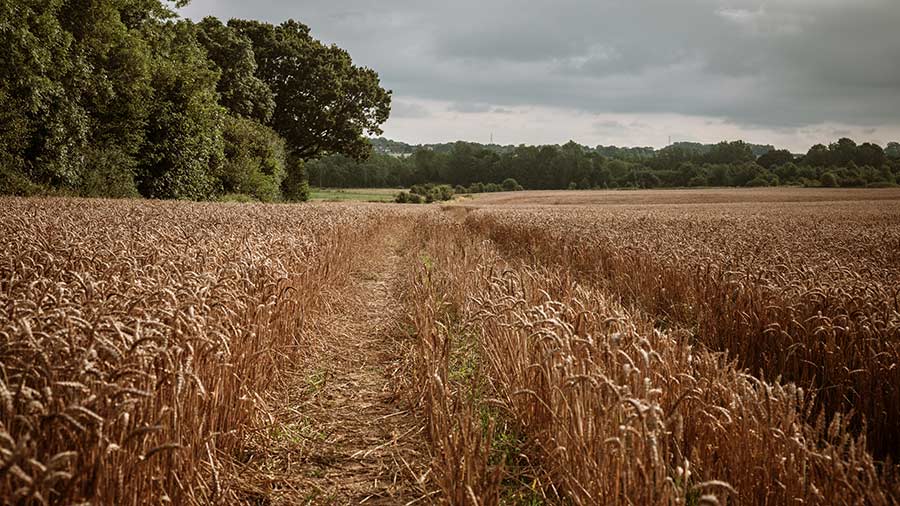 Albrecht-type soil testing is done, with help and guidance from independent soils adviser George Hepburn, so that any imbalances can be corrected and nutrients are made available for crops to utilise.

“That way, we only apply what’s required,” explains Mr Sewell. “We’ve got to the stage where our soils are providing much of the essential nutrition.”

Despite their diversity, the cover crop mixes are cheap and cheerful, he reveals.

“I will aim to have 8-10 species in them and will make good use of what we’ve got in the barn. If oats are included, we top them to stop them seeding. There’s no need to spend a fortune on cover crop seed.” 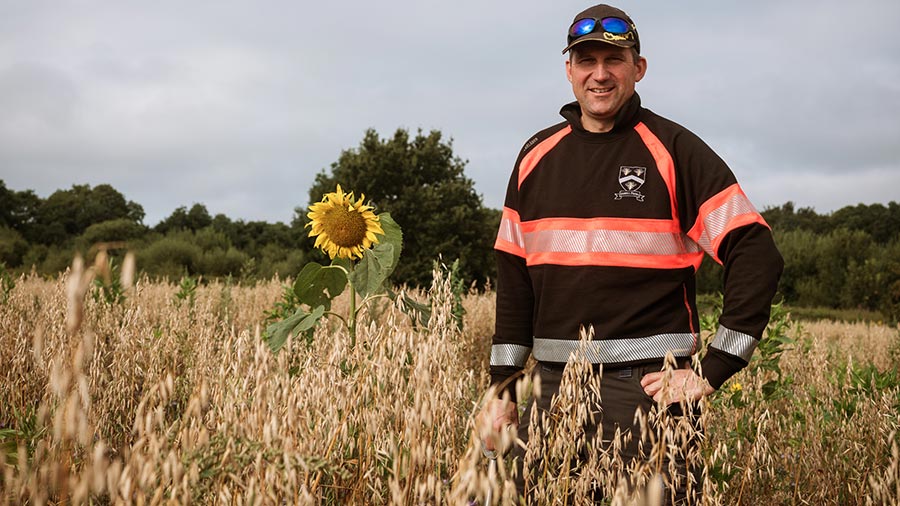 A key reason for moving to no-till is the high stone content of most of the land that the Sewell family looks after.

Rather than having a huge machinery maintenance and repair bill, he has found a way to work with the rocks – getting soils to regenerate and build up on top of them.

He does, however, admit to picking up 20t of rock over last winter on a new block of land, which had always been cultivated and had the straw removed every year.

“It’s very stony land and the crop in it is our worst field of wheat. We’re growing a cover crop on part of it and will follow it with winter beans, which always have a good soil conditioning effect.”

Neighbouring soft fruit farms are good sources of compost, which is used widely, and has become a fundamental part of his strategy to build long-term soil fertility.

Two drills are operated – a home built 4.8m CrossSlot with 9in rows and a Horsch Sprinter tine drill with 10in rows and VOS 19mm points.

“Whether we will need to keep two drills as the system matures remains to be seen,” remarks Mr Sewell. 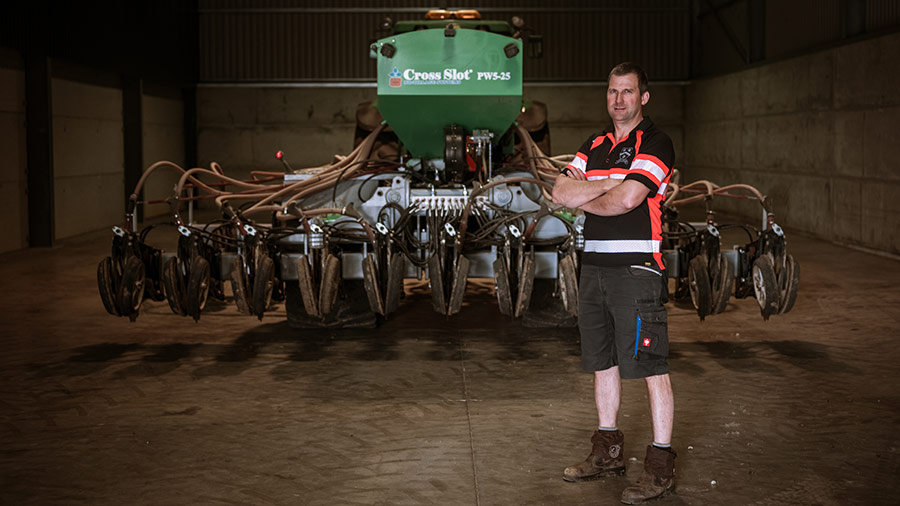 With the Environmental Land Management scheme on its way, BPS payments reducing and rewards on offer for soil-friendly farming, Tom Sewell’s future plans include: 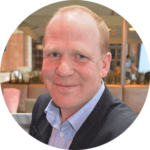 Understanding how nutrient cycling works was the start of the soil-friendly farming practices that saw Buckinghamshire-based Antony Pearce named runner-up in this year’s Soil Farmer of the Year competition.

Three years ago, he was in what he describes as a “safe place” – farming conventionally and producing high yields of combinable crops, albeit with the help of high inputs at a cost.

Since then, he has been taking progressive steps towards a more sustainable system based on advanced soil health, having attended a course on how to create nutrient availability from soils.

He also travelled to America to learn from experts and read around the subject, becoming more familiar with the role that soil biology plays and the two-way relationship needed with plant roots to get nutrient cycling working well.

As a result, he is now making compost comprised of cattle manure and woodchip, has reduced his use of both fungicides and fertilisers, incorporated cover crops and under leys into the rotation, as well as investing in better genetics for disease resistance.

“As my confidence has grown, my reliance on artificial inputs has reduced,” he says. “I couldn’t wean myself off fungicides completely at first, so I’ve done it in stages.

“There’s no doubt in my mind that if a plant is less fleshy, it’s less susceptible to attack.”

He was also aware that using nitrogen fertilisers upset the C:N ratio that soil bacteria need to thrive. Applying artificial nitrogen increases their need for carbon, which they find from organic matter at the expense of soil health.

“Looking at my soils it was clear to me that the best structure came after beans were grown. And they don’t have any nitrogen fertiliser applied.”

The compost, which is a 50:50 split of farmyard manure and woodchip, is applied at a rate of 20t/ha, and over a five year period is expected to supply 200kg/ha of nitrogen. It is turned twice, before being applied to support the soil microbes.

“I want it to have a high fungal load, which is where the woodchip plays a role as it’s a complex carbon source.”

Mr Pearce has also taken the bold decision to put half of his home farm into a low input system, with the other half being farmed conventionally. Armed with the knowledge that he could produce 6.5t/ha of wheat without nitrogen, he was curious to see what could be achieved with a regenerative approach.

To date, the low-input approach has produced a negative net margin, except for the spring oats.

“That’s mainly because organic manures are so expensive,” he explains. “They are also a challenge to move around and deal with.”

Taking risks in the transition period, while he is still receiving Basic Payment Scheme income, is not a concern. Not only is government support being phased out, he is also losing 66ha of farmland to the HS2 development.

“When HS2 was announced, I had to do some thinking,” he reveals. “If a regenerative approach doesn’t cost us much and is helpful in terms of sustainability and biodiversity, it makes sense.

“So that’s what I’m doing on the land that we are keeping – the land that’s going to development is being farmed as we always used to.”

Having changed his farming system, he admits that he is not as scared of heavy land as he used to be.

“When it has a cover on it all the time, the rain can percolate rather than puddling on the soil surface,” he explains. “And if it has the time to do that, it means that spring droughts aren’t such an issue either.”

He favours the use of flexi wheats following oilseed rape for the leeway they give with drilling date, allowing late autumn or spring planting. That also means he can use a cover crop, often mustard, which is grazed with sheep over the winter.

“We want the sheep to hit it hard and then move on. We’ve found we need a month between the sheep leaving the field and the drill arriving.”

Mr Pearce is experimenting with a clover under storey in his low-input oilseed rape to see what it can offer in terms of nutrition and weed control. It was knocked by the winter application of Kerb (propyzamide), but has kept going and is helping to deter blackgrass.

The OSR crop hasn’t received any bagged nitrogen, but had 30kg of N/ha of digestate and 15kg of foliar N at flowering. He uses a stubble rake after the rape has been harvested, both to control volunteers and slugs.

This year, the rake has also been used as a hoe in wheat, which had the unexpected benefit of releasing mineralised nitrogen.

Spring oats are being grown in a similar split comparison basis to supply a gluten-free contract and have received just 15kg of foliar nitrogen.

“It’s been all about keeping an open mind and learning as I go along,” he comments. “I have set up a support network to help with a local What’s App group, and with a YouTube channel to help other growers through the transition.”