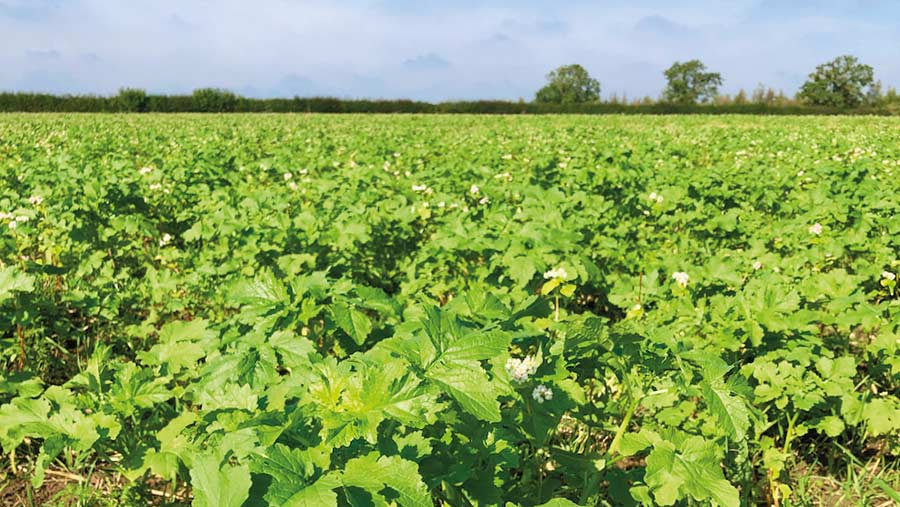 After purposefully leaving environmental schemes in limbo following the end of an Entry Level Stewardship (ELS) scheme a couple of years ago, he has calculated that the SFI pilot has just over £13,000/year or £38/ha advantage compared with a comparable CS – mostly due to the introduction of the Arable Soils Standard.

“Both schemes will deliver the environmental goals I want to achieve on the farm, but SFI made better financial sense, not least because we’re aiming to run a profitable business,” Mr Adams says.

“We chose not to go into the no/low-input grassland and the farm woodland standards, which would have been applicable to us but the payment rates were miserable,” he says. “They weren’t worth considering due to being overly complicated, so it wasn’t worth the paperwork.”

The SFI introductory hedgerow standard and the equivalent CSS management of hedgerows (BE3) are broadly similar in payment terms – just a £1/100m advantage for SFI.

To qualify for this payment, he must leave at least 50% of the hedgerow uncut each year and maintain an average of one hedgerow tree for 400m of hedge.

Contractor costs for cutting the hedges average about £40/hr, but this is a cost he would have to bear regardless of being in or out of a scheme.

Mr Adams decided against applying for the intermediate or advanced levels of this standard as it required at least 50% of the hedges to have buffer strips on both sides, which wasn’t possible on most parts of the farm. 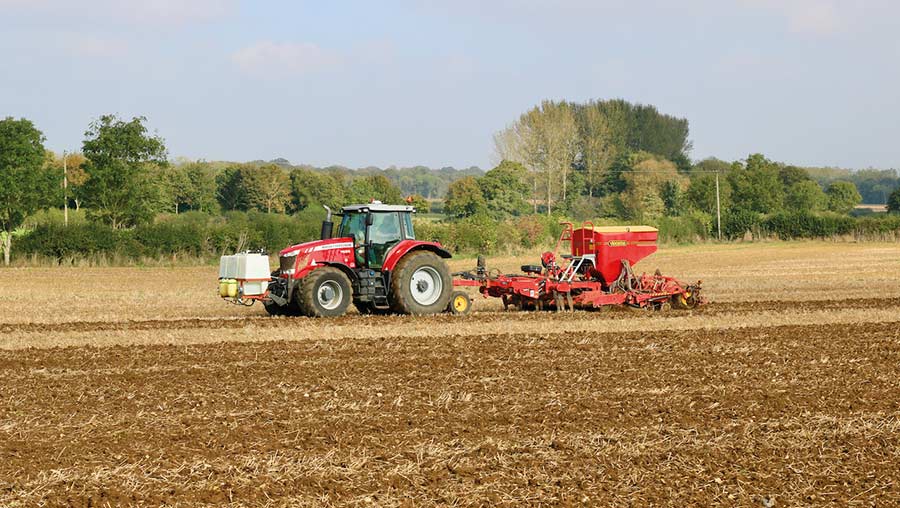 The water body buffering standard in SFI pays less well than the equivalent CSS options, according to Mr Adams’ calculations, even after going up a level to the intermediate standard.

In this option he must do a “straightforward” runoff and soil erosion risk assessment and establish grass buffer strips to protect watercourses.

“For the intermediate level you need 6m-wide strips on at least 20% of the total length of the waterbodies in the agreement, which we already have in place, and 10m-wide strips on 30%.”

The 6m buffers equate to SW1 in CSS, while the 10m strips are most closely aligned to SW4 – 12m to 24m strips on cultivated land.

In addition, as part of the SFI intermediate option applicants can optionally decide to establish in-field grass strips or blocks to help intercept run-off water – Mr Adams has just over 5ha paying £500/ha, compared with the equivalent SW3 option which pays £624/ha.

In the recent review of payment rates for both SFI and CSS, grass blocks were unchanged in SFI, while increasing by 11% in CSS. “I’m not sure why this SFI payment rate didn’t increase while the others did,” Mr Adams says.

He has used these to take out of production poor-performing areas that often lie wet and are at risk from erosion. It also helps straighten up field areas, which will improve operation efficiency – important with less labour on the farm.

While he could just leave these areas to establish naturally, he will spend about £100/ha on grass seed. 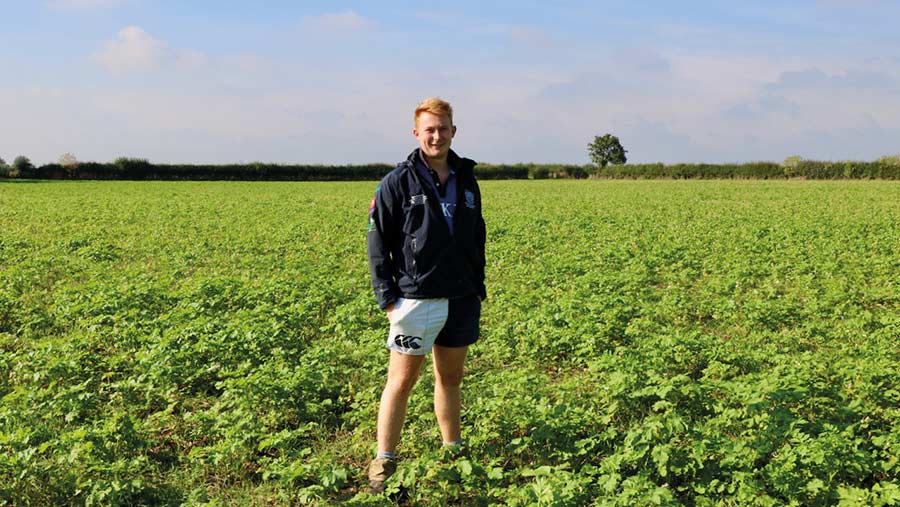 The Arable Land standard is a little more complex and confusing, with different potential options available – most of which mirror existing CSS options.

It takes land out of production with targets for nesting and cover, insect- and flower-rich habitats, and providing bird food, with several potential options to achieve this available for each.

“We’ve chosen more grass strips for the nesting and cover, which is like the watercourse option and makes for easier management,” he says.

“For the sown winter seed, we’re drilling bird food plots – which we have already for a small family shoot – and for habitat for insects and flowers we’re putting in flower-rich margins.”

Supporting farm wildlife will be achieved through supplementary winter feeding of wild birds, with a hope to increase farmland birds.

“There are options which could probably give us a better return, but these fit well into what we want to achieve on the farm,” he says.

Compared with equivalent CSS options, there is an advantage of just over £2,200 for the SFI pilot. “That’s about £6/ha – which is marginal in reality,” he says.

There are other hassles with the Arable Land standard, such as incorporating organic manures within 12 hours.

“That’s going to be a logistical pain,” Mr Adams says. “Currently, it’s 24 hours as we’re in a NVZ. Effectively, it means spreading in the morning and incorporation in the afternoon.”

He’s also not happy with the requirement to soil map for variable-rate applications. “We don’t spread any granular P, K or lime so the prescription seems pointless in our situation, and just an extra cost with no benefit.”

“It wants you to do either 25% of the land each year or all the eligible land once every four years. But the agreement is only for three years, so does this mean I can say I’m going to do this in year four?” he suggests.

The final standard is the one that changes the calculation in SFI’s favour: the Arable Soils standard.

Mr Adams says: “If this wasn’t an option, we would be entering CSS as it would give more flexibility if we ever wanted to do other options. That is one drawback of the pilot – rotationally, CSS is better.”

The farm is entering the advanced standard, which requires min-till or no-till on at least 25% of land and green cover to be established by the end of September on 15% of arable land.

Neither is an issue, with a min-till system in place and at least 20% in spring crops, all of which have an overwinter cover crop beforehand.

“We’re also introducing more catch cropping before winter wheat as well so we will be way above and beyond. Our cover crops will also help meet the increasing organic matter requirement too, plus we have a straw for muck deal.”

Mr Adams was already planning more in-depth soil tests through Sustainable Soil Management, which will help cover the soil assessment condition, to better understand how to manage soils and make best use of inputs.

“There’s also a requirement to alleviate soil compaction – but what farmer isn’t trying to do that anyway?” he says.

With the only relevant equivalent option in CSS being SW6 – winter cover crops, at £60/ha across 350ha – it makes undertaking SFI Arable Soils advanced level the major contributor to an overall increased income of just under £50,000.

The scheme is made viable by taking the poorer-performing areas out of production, Mr Adams says.

For example, by removing 28ha for Arable Land standard options, the total income from this option works out at more than £700/ha for this area.

It will have the highest amount of input cost, but works out to an approximate gross margin of £450/ha.

Similarly, the water body buffers take out just over 10ha, with a total income of £388/ha for the strips and £500/ha for the grass blocks.

With variable costs of about £100/ha for grass seed, it leaves a gross margin in the region of £350/ha for this option, he calculates.

“They are all on the low scale of profitability, but realistically they are contributing more doing this than cropping with failed crops,” he says. “It’s stable, guaranteed income that reduces risk to our business.”

Online application was relatively easy, he says. “We only had a couple of queries regarding fields, which was fixed within a few days. RPA has been quite good in answering questions within a couple of days, which is better than in the past.”

“But going through the options and costing them was difficult and did take a significant amount of management time.”

As part of the pilot, there is a £5,000 incentive to provide feedback through a weekly journal, while he was also provided with three different templates for creating a land management plan.

“I didn’t find the information provided around the land management plans particularly good; it’s difficult to gauge what Defra wants,” he says.

While there are some niggles within the pilot scheme, he is broadly supportive of SFI as a policy.

“There are some problems with what has been rolled out for the initial 2022 scheme, but you also have to remember that only a few options have been released so far. It’s not the full release, so things will change between now and 2024.”

That includes the launch of the Local Nature Recovery part of Environmental Land Management, as well as additional SFI options. But it is important not to view the schemes as a replacement for the Basic Payment Scheme, he stresses.

“For me, SFI is effectively equivalent to the lower-end options of CSS and the wildlife offers, while Local Nature Recovery is more the higher end of Mid Tier CSS and Higher Tier options.

“The best way to think about it is basing it against CSS.”