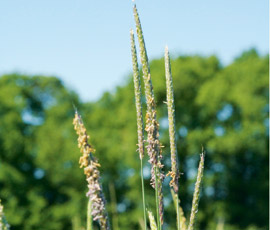 Cereal growers will have one last chance in their battle against grassweeds with blackgrass and sterile brome seen as number one targets this spring.

Many late-drilled winter crops, which did not receive a pre-emergence herbicide spray in a wet autumn, may well now need urgent treatment.

Blackgrass control sprays have been delayed by the late spring, but growers are advised to act swiftly as temperatures rise and weed growth takes off.

“Active growth is beginning to occur so we need to go all guns blazing,” he tells Farmers Weekly.

He advises growers with a blackgrass problem to use Unite (flupyrsulfuron + pyroxsulam) or Broadway Sunrise (pendimethalin+ pyroxsulam).

“It’s going to be a bit of a rush over the next few weeks but they need to take into account next season in terms of rotation and weed control,” he says.

Mr Jackson believes many will be looking to use a winter oilseed rape break crop and Kerb (propyzamide) to tackle weed build up following cereal crops.

The pyroxsulam-based products have no requirement for cultivations post-harvest, meaning growers are able to use a min-till system while keeping the effectiveness of Kerb next autumn.

“Other products have cultivation restrictions that will impair weed control efficacy in a following oilseed rape,” explains Mr Jackson.

One benefit of the late cold season is blackgrass is relatively small giving growers the opportunity to tackle the weed effectively.

Mr Jackson admits that once past growth stage 24 for blackgrass, the efficacy of Unite drops off making iodosulfuron + mesosulfuron a more viable option.

Where blackgrass in not the main concern, Mr Jackson says sterile brome and great brome will be the top priorities for most growers.

In these situations he suggests using Broadway Star which will also remove the need for separate broad-leaved weed treatments.

“This can save you time and money as you can go with just one spray,” he explains.

Arable Alliance agronomist Peter Brumpton agrees the focus will be blackgrass and brome in the coming weeks, and advises Atlantis (iodosulfuron + mesosulfuron) where blackgrass is more prevalent.

“Growers need to get on as soon as possible really. The crops and blackgrass are small, but they are moving,” he says.

We’re going to have a T0 and T1 spray imminently so we really want a bit of a gap – at least seven days between that and the next application for crop safety purposes,” he explains.

He advises that a good spray window will allow crops to re-wax after the initial application.

Mr Jackson says tank mixing with Unite is an option with it supporting a T0 fungicide mix involving the actives chlorothalonil or certain triazoles.

“There is also an option of mixing half dose straight of growth regulator chlormequat,” he says.

Wild oats and ryegrass control will also have to be taken into consideration this year with Mr Jackson advising Broadway Star.

The danger of going too early for wild oats is growers could miss spring germination, but Mr Jackson says once there is the warmth and moisture in the soil, the weeds will grow fairly quickly.

“The key with all grassweeds and wild oats is to take them out as early as you can. The smaller they are the better performance from any product. You need to take out the competition early and not wait around,” he says.

More  on this topic