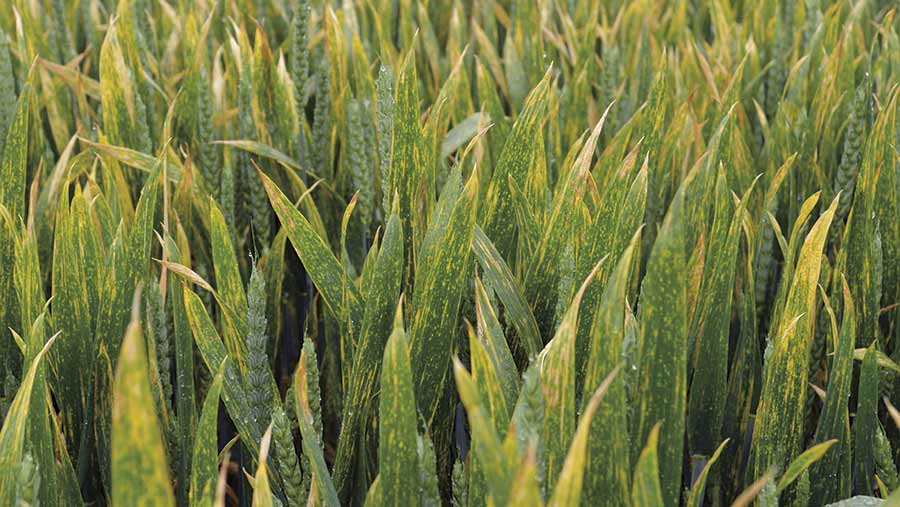 Late rust diseases could be a threat to wheat crops in the current wet weather and growers who have not yet applied T3 ear sprays are being urged to add in rust-active products.

Many growers in southern England will be currently applying T3s to counter fusarium risk, but the warm and rainy weather could also be ideal for yellow and brown rust.

Bill Clark, technical director at crop consultants Niab, warns there is a lot of yellow rust being seen from Cornwall to Berwick-on-Tweed, and this could be a problem for growers.

See also: A guide to the key fusarium ear diseases in wheat

“Crops often look as if they have grown away from rust at this stage, but often yellow rust will catch up,” he told Farmers Weekly.

Azole fungicides are typically used as wheat ear sprays and applied at early to mid-flowering, with prothioconazole regarded as the most effective fungicide against fusarium.

However, a specific rust-active azole, such as tebuconazole or metconazole, could added as these two also have some activity against fusarium, and a prothioconazole-tebuconazole approach is popular among growers.

The spell of hot weather in late May prompted early ear emergence with flowering quickly following, and warm wet weather at flowering is ideal for fusarium.

The current weather is ideal for fusarium, but the very hot spell towards the end of May could have encouraged brown rust, he added.

T1 Spray miss in Diego. Looks to be breaking down to yellow rust as a variety now! pic.twitter.com/VnBILKrPwp

“The danger is that brown rust will start to creep in especially in the south of England, brought on by the recent warm spell of weather,” Mr Blake said.

In addition, he reports that yellow rust is becoming more active across a number of Adas trial sites.

Will Foss, technical manager for eastern England at advisory group Agrii, said with crops growing quickly and with some T2 sprays going on late, the interval between T2 and T3 sprays might be shorter this season than the traditional two to three weeks.

“Growers should not be hanging around and they should treat crops according to growth stages rather than at a set interval,” he said.

Scotland is generally not warm enough for big brown rust outbreaks, but late yellow rust and septoria are potential disease worries as well as fusarium.

Fiona Burnett, disease expert at Scotland’s Rural College, said T3 sprays are crucial north of the border to keep leaves as green as possible to boost yields in a later-maturing climate.

She added these fungicide sprays can be very yield responsive as they control ear diseases such as fusarium and also foliar diseases like yellow rust and septoria.

“It is a double win for growers as the T3 spray controls ear diseases and also late septoria,” she said.

After a dry spring the move to more wet weather in late May and into June is ideal for fusarium and could encourage septoria to spread up wheat crops.

Yellow rust is being seen in some crops close to the east coast from the Scottish border and up to Aberdeenshire, said Prof Burnett.

She suggested that a prothioconazole-tebuconazole azole mix is a good approach for ear sprays, while those threatened by severe yellow rust may need to add in a strobilurin.