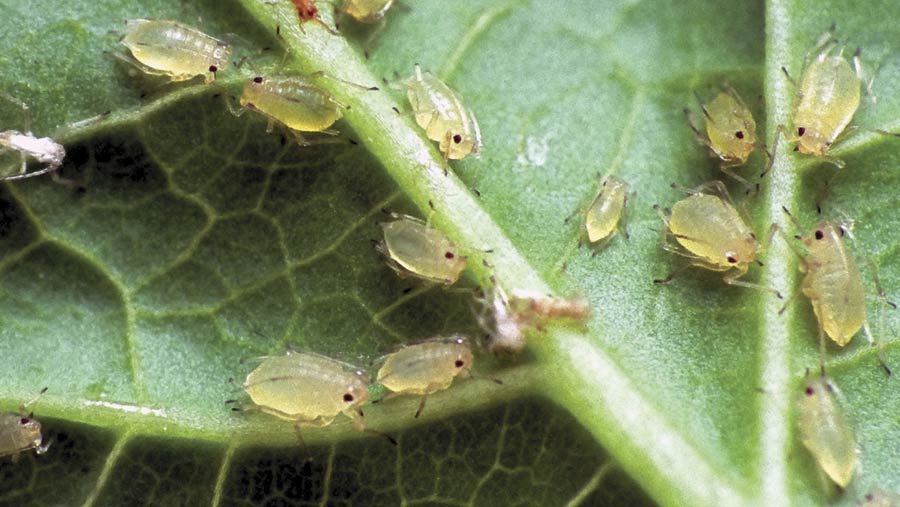 Oilseed rape growers concerned about the impact of turnip yellows virus (TuYV) will have a larger selection of resistant varieties to plant next season, with yields that are much closer to non-specialist varieties.

Hybrid variety Architect and conventional variety Annalise, both from Limagrain, are candidates up for recommendation this coming autumn, with two years of gross output harvest data showing yields just 5% below the top candidate.

This compares with the current AHDB Recommended List where resistant variety Amalie has a gross output 15% lower than the top yielder on the North list and 12% less than the best on the East/West region List.

The figures suggest that the yield penalty of TuYV resistance has been more than halved by breeders.

Although the virus can slash potential yields by up to 30%, there are often few symptoms to show the crop is under attack, says Agrii seed specialist David Leaper. This means other factors are often blamed when a crop performs poorly.

Where symptoms do show themselves, they take the form of red or purple leaf margins, or interveinal yellowing and reddening.

Often spread by the peach potato aphid (Myzus persicae), TuYV has been controlled in the past by a combination of pyrethroid applications in the autumn and additional plant protection from a neonicotinoid seed dressing.

However, with neonicotinoid seed treatments in oilseed rape crops now a fading memory, and with the continuing decline in effectiveness of pyrethroids, Mr Leaper says that growers are being urged to turn to genetic protection to retain yield potential in the potentially highly profitable break crop.

This means that crops are more likely to be planted and emerged in time for aphid populations to infect them, before colder weather kills aphids off for the winter.

Limagrain’s head of oilseed rape breeding (maritime region), Vasilis Gegas, says that growers in the UK will experience varying levels of TuYV between seasons as different numbers of aphids are blown in from the continent.

He explained that the 2014/15 season was notable for being particularly bad, with incidence rates above 75% in areas most affected by aphid populations.

Eastern regions likely to be affected

The worst affected regions run down the eastern coast of England, from Yorkshire to Kent, coming inland as far as Cambridgeshire, with other areas further west and north seeing lower populations.

Last season, incidence rates peaked at around 70%, said Mr Gegas, and while data was still being collected and analysed this year, initial aphid numbers indicate that this season has the potential to be in line with the 2014/15 season.

While it is too late to change matters for this season, Mr Leaper reminded growers to keep the disease in mind at harvesting time, particularly if crops are yielding below their potential for no obvious reason.

He has spoken to farmers and agronomists in high risk areas who have ruled out TuYV on their farm as crops look free of the signs of the disease.

But he adds that if they are within the area where aphids carrying infection have been detected, it is likely to have had some impact.

“You don’t know what sort of autumn you’re going to get,” says Mr Gegas, who explains that it is very difficult to predict when aphids are going to peak. This means that even if growers wanted to rely on chemical control of aphids, it is hard to time treatments correctly.

Mr Leaper explains that Agrii is focusing on Architect for next season to help farmers in the battle against the virus and he believes it will become a significant variety in future seasons.

He points out that in addition to its TuYV resistance characteristics, the variety also possessed the ability to carry a strong green area index over from winter to spring, as well as resistance to pod shatter, making it particularly attractive to northern growers.

Architect also possesses a disease resistance rating of six on the candidate list for both light leaf spot and stem canker and is early maturing, which he believes puts it in a strong position.