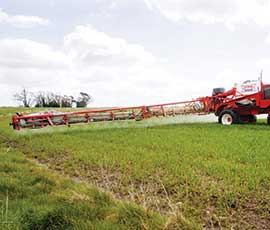 Concern is growing over grassweed levels in winter wheat and growers are advised to get post-emergence herbicide treatments on early.

This autumn was hailed as the best opportunity to get on top of blackgrass in seven years, with the hot dry summer resulting in low weed seed dormancy.

This led to fast germination of blackgrass prior to drilling, presenting the chance of good out-of-crop control, taking pressure off herbicides chemistry.

“As a result those early drilled crops have really suffered. Pre-emergence herbicide performance has also been poor in the dry conditions,” he adds.

Mr Hemmant says that recent rains have provided moisture to activate pre-emergence residuals such as Crystal and Liberator; it will be too little to late in early sown crops.

His advice now is to protect yield and the best chance for good control is an early application of Atlantis or Unite when target weeds are small and actively growing.

Air and soil temperatures remain mild and many crops are soft and lush, leading to fears over crop safety, but he believes some level of crop scorch would be a small price to pay for good grassweed control.

“It’s only going to get colder from now on, so growers should get the treatments on while soils are warm and moist and the weeds are growing well,” he says.

Although sulfonylurea herbicide resistance is a problem in some blackgrass populations, products from this group, Atlantis and Unite, remain the key post-emergence grassweed killers.

Mr Hemmant believes Atlantis has the edge for blackgrass control, but where brome is the predominant target, Unite could be the favoured option.

This is a view shared by northern independent agronomist Julian Thirsk, who is seeing high levels of brome across his area of Yorkshire, Northumberland and Durham.

“Brome has been romping through, largely down to high seed return from the poor control last year and low seed dormancy.”

He says the urge to drill early has been worse in northern areas, which suffered badly in last season’s wet autumn, exacerbating the problem further and he is urging his clients to use all spray opportunities, which are at a premium.

“It was noticeable from last year that where an application went on in the autumn, tidying up in the spring was much easier,” he adds.

“It would be the strongest option, but where blackgrass isn’t a problem pendemethalin would be adequate, just ensure that the 2,000g/ha limit isn’t breached if you have used Crystal at pre-emergence,” he says.

Maximising the efficacy of the post-emergence herbicides will be vital, particularly where the pre-emergence timing was missed and Mr Hemmant says care should be taken with application methods to give the spray the best chance.

“Using forward- and down-facing flat-fan nozzles and ensuring a steady forward speed and the correct boom height will give it the best chance,” he adds.

Herbicide resistance in the spotlight