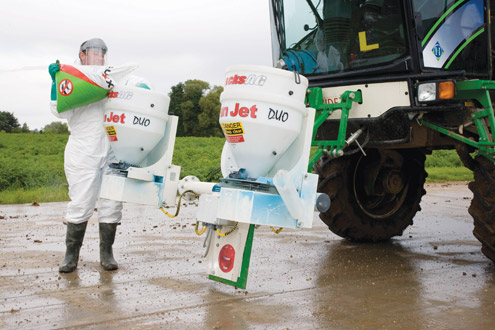 Crop management and protection is a constantly evolving practice and requires growers and agronomists to keep up to speed in order to maximise potential and stay within the law.

One way of doing that is to obtain the BASIS certificate in crop protection – a legal obligation for those selling and supplying pesticides.

The BASIS qualification is primarily aimed at arable advisers and agronomists, but an increasing number of farmers and managers, both young and old, are gaining the qualification.

BASIS managing director Rob Simpson explains that BASIS was founded as the British Agrochemicals Standards and Inspection Scheme, but now has a far wider remit in the pesticides industry.

Legislation dictates all those selling and supplying pesticides must have a BASIS certification and the government recommends advisers do as well.

Most independent and distributor agronomists hold the industry’s only recognised competence certificate, along with some farmers, managers and spray operators.

“Once the certificate is gained, you are put on a professional register which ensures holders maintain their knowledge and skills by collecting continuing development points,” Mr Simpson says.

So what does it involve? There are no academic requirements to take the course, but it is recommended that students have at least one to two years of industry experience. BASIS business development manager Stephen Jacob points out that although the course is testing competence rather than academia, the standard is still on a par with an honours degree.

“There is classroom work, but the most important part of the course is getting out in the field and immersing yourself in the weed, pest and disease problems facing farmers,” he adds.

Lincolnshire farmer David Hoyles enrolled on a BASIS course in the winter and spring of 2005-06 to improve his knowledge of crop husbandry.

After leaving university he pursued a career in marketing, before returning to the 550ha farm at Long Sutton, near Spalding, to take on the family farm.

Mr Hoyles had limited practical experience in the industry, so needed to fast-track his learning to understand the way crop protection worked.

“I wanted to be able to challenge the advice I was receiving and also the information you pick up in the press and at meetings,” he explains.

He took the course through Holbeach Marsh Training Group, who secured funding, and was taught largely by the University of Lincoln.

The first part of the course laid a good foundation on general principles, before getting into crop specifics and chemistry in the latter part of the curriculum.

“The winter and spring was a great time to take it, as the course culminated in the period when thing were really kicking off in the field,” says Mr Hoyles.

He found the course tough, particularly relating to crops that he had no experience with on the farm.

“They [the crops] took much more studying and I had to get out with specialists crop walking to brush up on the details,” adds Mr Hoyles.

The benefits have been clear for both Mr Hoyles and the family business, which grows potatoes, beetroot, sugar beet, wheat and mustard.

He says it has given him the confidence to challenge his agronomist and a detailed understanding of how to manage his crops in the field.

“I have also been able to make a financial saving by doing a proportion of the agronomy myself and it has improved the attention to detail given to crops,” explains Mr Hoyles.

Attention to detail is something that has stepped up crop performance, with an outside agronomist often having to cover large areas while facing time constraints.

However, with his BASIS qualification, Mr Hoyles can keep a close eye on crops and ensure nothing is missed and input timings are spot on.

“Outside help is still important to us though, particularly on the herbicide recommendations and applications,” he adds.

The individuals all contribute to a pot to fund their own independent trials, managed by a specialist trials company.

At present, the group has only trialled wheat, focusing on plant growth regulators, fungicides and nitrogen, but it hopes to extend trials to incorporate sugar beet.

“Sugar beet advice is quite general, so it will generate information that is specific to our individual farms on a local level,” he says.

Regular meetings also allow the sharing of information between members and guest speakers from ag-chem companies and research bodies, such as NIAB TAG, giving the group cutting edge advice on agronomy issues.

“We are all learning from each other and collaboration is increasing in the younger generation of growers coming through,” he says.

Getting your FACTS right

Two years after passing the BASIS award in crop protection, Mr Hoyles was hungry for more knowledge and signed up for the Fertiliser Advisers Certification and Training Scheme (FACTS).

He believes this qualification has been more influential on his business management than the BASIS award, with changes made to nutrient management across the farm.

“We spend as much, if not more, on fertilisers than pesticides and it really opened my eyes to the interaction between all the major nutrients and micronutrients,” says Mr Hoyles.

Savings have been made on phosphate and potassium, with the farm now focusing on delivering nitrogen where and when crops need it most.

“The course was slightly less demanding and time-consuming than the crop protection course, but has been more valuable from a business perspective.”

The next step for Mr Hoyles is taking advanced modules that will contribute to the BASIS diploma in agronomy, which covers areas such as crop protection, environment and soil and water in minute detail.

Asked if he would recommend taking on BASIS and associated courses to other growers, he explains that it isn’t for everyone.

“You need to have a keen interest in agronomy and want to take ownership of that aspect of your business. If that is the case, I would wholeheartedly recommend it.

“If you are too busy, or don’t have the passion, then stick to whatever else you enjoy,” he says.