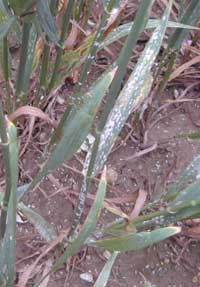 Integrating biopesticides with conventional pesticides could improve crop yields, reduce residue levels and improve operator safety, one of the leading firms in the market has claimed.

Marcus Meadows-Smith, chief executive officer of California’s Agraquest, reckoned the growing pressure on pesticides from regulators and consumers would drive a move towards more “low-chem” mixtures of biopesticides and safe, conventional pesticides.

The firm has just launched its microbe-based fungicide, Serenade, in collaboration with BASF, in several speciality crops, but the technique could in the future be much more widely applied, he said.

For example, trials in the USA had seen positive effects from Serenade against septoria and fusarium, his colleague Sarah Reiter claimed. But she admitted no work had been done in Europe as yet, where conditions were far more difficult.

Other biopesticide products being developed by the firm may have applications in potato, sugar beet and oilseed rape, she added. “Sonata, our new fungicide, has show equivalent control to boscalid and iprodione against sclerotinia in oilseed rape in the USA.”

She recognised that a previous biopesticide introduction in Europe, Bion, had not been a success. “Some biopesticides have over-promised and under-delivered. But that’s why we want ours to be officially registered as pesticides and backing them with trials work.”

Potentially the low-chem market could be worth up to $10bn in 10 years’ time, Mr Meadows-Smith suggested.