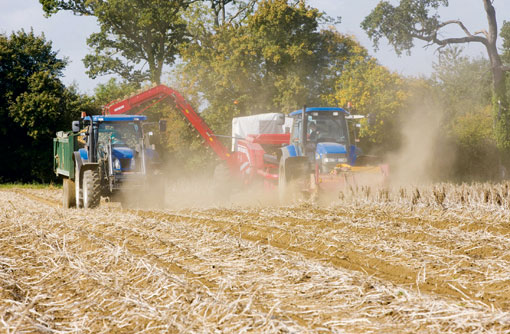 A grower collaboration project conducted by Cambridge University Farm has shown that higher potato yields can be achieved with less applied nitrogen.

The work has concluded that more soil nitrogen was available to the crop immediately after planting than is reflected in RB209 guidelines, thought to be caused by the vigorous soil cultivation required to establish the crop.

“From all the data we have gathered over several years, on average we managed to reduce the application rate by 34kg/ha in relation to the growers standard application,” says Marc Allison, potato nutrition expert at Cambridge University Farm.

“What is significant is that the reduced rate also resulted in more tuber yield. Growers often apply a slightly higher rate of nitrogen as insurance, but this shows in some instances it can have a negative impact on yield,” he explains.

The economic and environmental benefits could be significant, with an average increase of saleable tuber yield (>40mm) of 3t/ha when using the reduced rates and savings on greenhouse gas emissions from less artificial fertiliser use.

It is believed that the application of any nitrogen applied in excess of the crops requirements is affecting how dry matter is partitioned in the crop as it is photosynthesising.

“What you want is the crop to produce more tuber yield, but it looks like excess nitrogen is going into canopy production. The extra canopy may not be required to get the desired yield,” Dr Allison explains.

Although there is potential savings across all soil types, Dr Allison says it may not be a blanket reduction across in all situations.

Current nitrogen recommendations are based on guidelines set out in DEFRAs RB209 Fertiliser Manual, where a soil nitrogen supply (SNS) index is calculated on soil type, winter rainfall and previous crop.

A banded required rate is then provided after considering variety group and expected season length and a grower will decide whether to use the lower or upper end of that band.

“This should still be the basis of any nitrogen plan for potato crops, but we believe that the potential savings are possible due to an increased amount of available N in the seed-bed after planting, so the lower end could be adequate,” notes Dr Allison.

Vigorous cultivations are required to establish potatoes and it has been indicated that this aggressive working of the soil is stimulating bacteria, which may be freeing up nitrogen to the new crop.

All soils have the ability to give some nitrogen, but most arable field SNS indices fit into the 0/1 category under the RB209 system. However, the system was originally designed with cereals and oilseed rape in mind.

Data from CUF trials showed that in two Spearhead crops of Linton and Lady Rosetta, grown in 2011 and 2012 respectively, showed much higher total nitrogen uptake than expected when planted into soils indices of 0/1 (see table).

Presumed available N using RB209 would have been less than 80kg N/ha, but in both years total N uptake from the crop exceeded 115kg N/ha and produced respectable yields even where no extra N was applied.

“From the results, establishing potatoes has a positive effect on SNS and it should result in better fertiliser recommendations,” says Dr Allison. “There is still ongoing work, as we need more data from more varieties and soil types.”

When considering depth of cultivation, more available nitrogen was detected after deeper cultivations, but this was offset by the compaction created hindering rooting in the crop, he adds.

Cultivations were one factor that leads Dr Allison to conclude that soil sampling and analysis is no more reliable than using the field analysis method in RB209.

“The release of nitrogen from cultivations won’t be considered as soil cores will be taken in the spring before establishment.

“That delay between sampling and establishment also allows other variables such as rainfall to influence the available nitrogen over time, which will effect you overall nitrogen requirement in the crop,” explains Dr Allison.

Getting a representative soil sample across the whole field is also difficult he continued. “So you have to question whether it is worth the extra cost.” 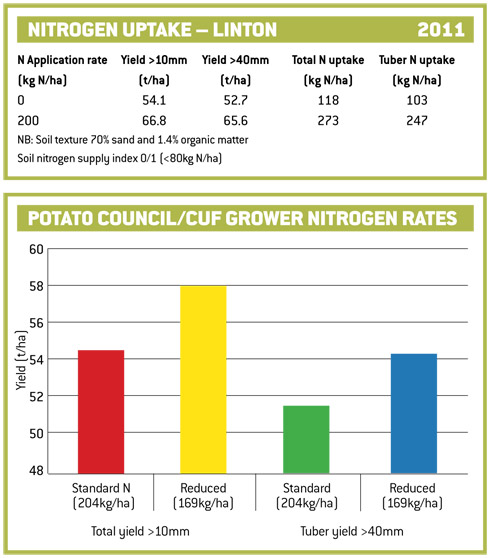 About one-third of the potato crop will receive applications of organic manures across the UK and it is believed that growers are still not accounting fully for the nutrients provided when formulating fertiliser plans.

“It is an under appreciated resource and although the survey of fertiliser practice statistics shows that growers are incorporating its use into fertiliser application decisions, there needs to be some improvement,” says Dr Allison.

“There are opportunities for growers to understand this area much better and there is potential to make further savings in the future,” Dr Allison says.