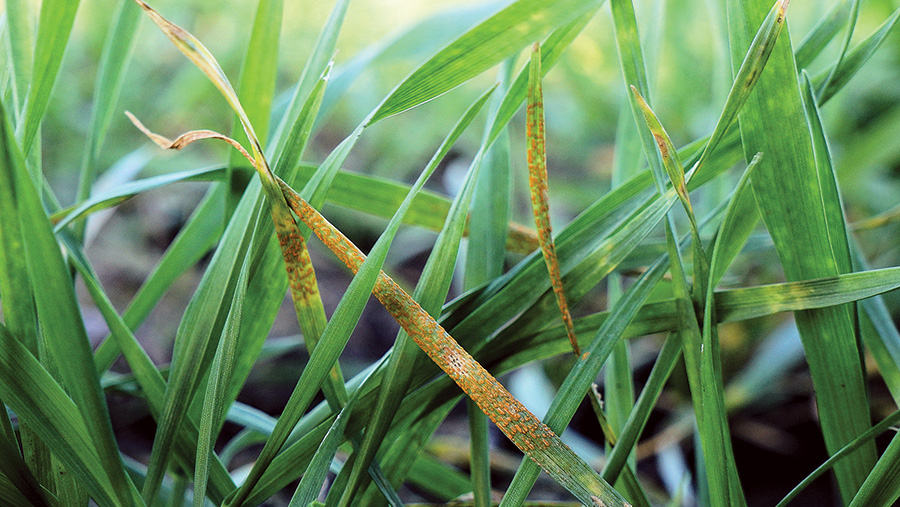 Winter wheat crops are growing strongly on David Hoyles’ farm bordering the Wash in south-east Lincolnshire and could be due their first fungicide this week with septoria and yellow rust evident.

In a yellow rust hotspot, the disease, which loves mild and wet conditions, is being seen on even those varieties with good resistance to the disease, while septoria is also visible on lower leaves.

One of his main varieties is the biscuit-making wheat Britannia, which is showing signs of yellow rust, and Mr Hoyles is considering applying his T0 fungicide spray this week.

“The number one disease concern here is septoria although fusarium is a worry later later on, and while we can see yellow rust we can manage it,” he tells Farmers Weekly.

Mr Hoyles is growing about 160ha of wheat on his 650ha farm at Monmouth House, Lutton, near Long Sutton, along with mustard, potatoes, vining peas, sugar beet, beetroot and cauliflowers on his rich silt soils only three miles from the sea.

He achieved a top wheat yield of 15.61t/ha last summer with a crop of the feed wheat variety Evolution, and across the farm wheat yields averaged 14t/ha.

Jack Hill and David Hoyles examine a crop of wheat.

The farm hosts a variety trial run by Bayer in this yellow rust hotspot, and Jack Hill, commercial technical manager at the agrochemical group, says he is seeing the disease across most of the varieties as well as on Mr Hoyles’ two main wheat varieties Evolution and Britannia.