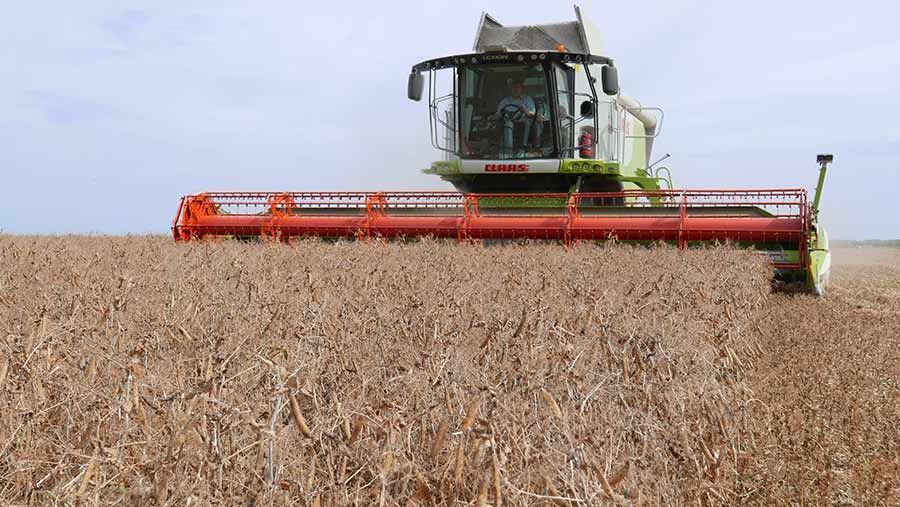 Lincolnshire Wolds grower Tim Lamyman has set a new world record yield for combining peas by harvesting a crop of 6.47t/ha, helped by a programme of foliar feeds.

The crop grew very consistently throughout the season and it ripened evenly up to harvest on Friday 25 August on one of his heavier chalky wold soils.

“This is the first time I’ve grown combine peas in my life so it was a fantastic result,” he told Farmers Weekly.

The field used for the peas was the one that grew a crop of winter wheat in 2015 that briefly held the world yield wheat record at 16.5t/ha.

He has grown vining peas before on his farm some 20 years ago, but it was his first move into combine peas when he drilled the large blue variety Stallion in the spring.

The old world record for combined peas was 5.21t/ha from a crop in Ireland, while a Saskatchewan trial in the Canadian Prairies showed a yield of 6.32t/ha in summer 2016.

Key to Mr Lamyman’s high yield on his 600ha farm at Worlaby on the Lincolnshire Wolds was crop nutrition, with four foliar feeds used on the crop throughout the season.

He highlights the importance of a flowering foliar feed containing calcium, zinc, boron and molybdenum to create a crop with even-sized pods. Other micronutrients, such as magnesium and copper, were also used on  the growing crop.

Harvesting the pea crop went very well, and cutting the 8.2ha field was competed in 3.5 hours with a 30ft-header Claas combine. Moisture was about 15.5%, so the yield was adjusted to 15%.

“The consistency of the crop was incredible as it never dipped below 6t/ha anywhere in the field and we had the combine reading up at 7.5t/ha,” Mr Lamyman said.