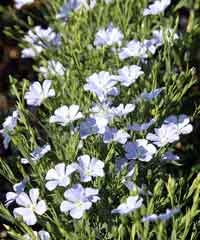 The price rise, which has seen spot values climb from £240/t in mid-September to today’s value of £300/t, follows the discovery of traces of the illegal Triffid strain of linseed in product shipped from Canada.

The GM strain, originally certified in Canada in 1996 but then delisted in 2001, was detected in samples from bakery products in Germany in early September.

This led to the removal of potentially contaminated linseed products from shop shelves, the isolation of silos containing the offending shipment in the Belgian port of Ghent, and a voluntary suspension of further imports.

“Canadian supplies have dried up and this has caused some consternation among buyers, many of whom have turned to the UK for guaranteed GM-free supplies,” said David Whyte of United Oilseeds. “This has driven our prices higher.”

Nigel Bazeley of Premium Crops in Hampshire said the development was good news for UK linseed growers and provided a real opportunity, especially with £300/t also available on contract for next harvest.

“Even though the current high price may not last, buyers will stay concerned about possible GM contamination from Canadian linseed and this will underpin our crop.”

With poor cereal prices, low premiums for malting barley and French pea and bean growers set to get extra subsidies for growing protein crops next year, Mr Bazeley believed linseed would grow in popularity – both as a spring and winter crop.

One farmer who buys into these arguments is Essex grower Guy Smith. “You can sell forward for £300/t next harvest and I have just decided to put another 30 acres of winter linseed in,” he told Farmers Weekly.

“I am also worried about the pea and bean price next year because of the area payments on the continent, and you can now sell linseed straw to power plants. For me, on difficult land, this makes linseed an increasingly attractive break crop.”