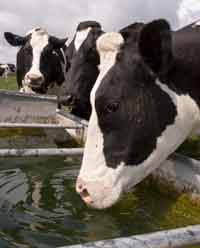 With the second largest forecast for wheat production on record, at 656mt, and global end stocks up 9% on last year, it looks likely that lower energy feed prices will help considerably to ease the ongoing problem of protein costs as we head into winter. Although wheat consumption has increased worldwide, the 642mt estimated demand still falls well short of predicted supply.

But there is need for some caution. UK carry-over stocks are at record levels (around 2.5mt) but much of this is suspected to be poorer quality material, the worst from last year’s difficult harvest.

Overall, wheat futures for November have settled at about the £110-115/t mark, with the latest USDA report only causing a temporary dip of around £5/t when higher than expected US corn plantings were announced. There was concern dry weather had caused an early end to corn sowing, with farmers switching to soyabean instead. The new figures confirm a corn area actually 3m acres greater than expected, with a similar deficit on the soyabean side.

The differential for winter forward contracts also seems to have returned to the £10/t mark, having reached highs of £15-16/t in recent weeks. In contrast, barley remains oversupplied, with little demand causing it to trade at £10-15/t less than wheat at present. For some, it may well be worth considering as an alternative to wheat if the price is right and quality is good.

The potential for cereal prices to come down further does exist, despite news of dry weather in Argentina and Australia and the likely rise in demand as UK biofuel plants begin to come on-line during the next six to 18 months. Timely advice would be to look to secure up to 50% of cereal requirements for the winter during the next two months if the market dips as the new crop enters the market.

However, with large volumes of old crop still in evidence, quality may be an issue, with other energy feeds like maize meal, Sweetstarch and even Soda-wheat remaining both better value and more consistent. Compared with the cost of, perhaps, variable quality rolled wheat (with typical £10/t processing cost), these other starch feeds are arguably the more reliable option.

Wheatfeed also remains exceptional in value, at £75-85/t on-farm, as are many of the digestible fibre feeds, such as the good deals available on sugar beet feed. In contrast, soya hulls may be less available as a result of a 15mt reduction drop in last year’s Argentinean soyabean crop. This will inevitably push up the price of other fibre feeds like sugar beet feed and citrus pellets, so taking good cover now could be a wise move to guard against potential price increases.

On the proteins front, soyabean meal is above £300/t, and looking set to remain there for some time. The news of a 76m acre US soyabean crop, compared with 78-79m acres predicted by the industry, has clearly had an impact, with China continuing to order regular shipments, keeping demand ahead of supply.

Whether the price will ease once winter arrives and anticipated higher plantings in South America – on the back of lower corn values – are, perhaps, confirmed, no-one knows. What we do know is that most UK farmers will still be best served by minimising soyabean meal requirements through the use of a combination of alternatives, such as distillers’ pellets, rumen-bypass proteins (e.g. SoyPass, ProtoTec) and rapemeal, then buying what soyabean meal is needed on the spot market for the time being.