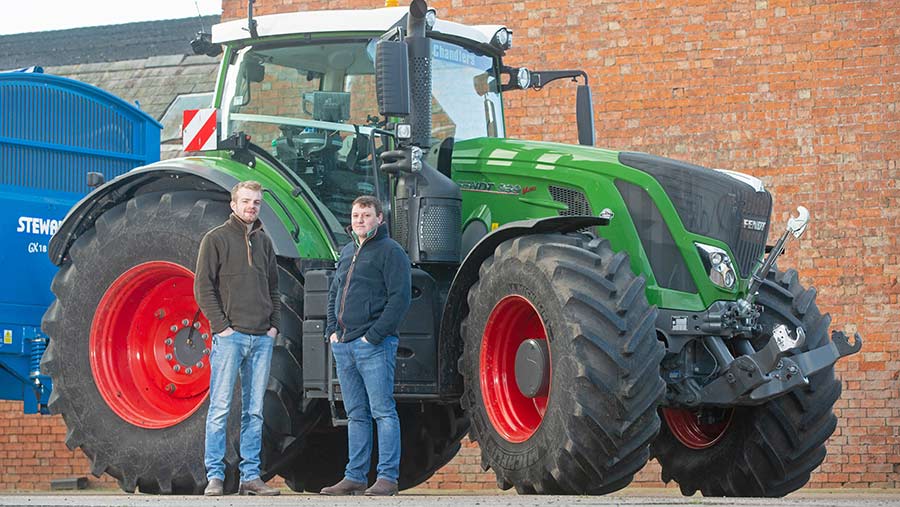 As the sons of two Warwickshire arable farmers, Angus Russell and Tom Ellis found themselves in the same boat – keen to carry on the family farm but facing increasing costs and an uncertain future without subsidies.

On top of this, both needed to change their combines, and with both farming 400ha, the figures didn’t stack up at all, says 34-year-old Mr Ellis.

Buying a new combine would have cost £87.5/ha, leaving each with the option of keeping their existing model and running it into the ground, or doing something different.

Talking in the pub one day, the pair decided to do something different – buy a combine together and form a machinery-sharing partnership.

“We haven’t known each other that long, but our dads have been friends for years. We met somewhere and clicked, we have the same sort of ideas, we want to go forward and be profitable,” says 24-year-old Mr Russel.

With neither keen on renting land, and fertiliser and chemical prices relatively fixed, machinery stood out as the obvious place to cut costs and increase efficiency, especially as Mr Russell had already taken on some additional contracting work.

The pair got a few quotes and then when they put the figures to their fathers, things started to stack up.

The foursome visited the Lamma machinery show in 2017, and then took delivery of the shared Claas Lexion 770 combine just in time for harvest that year, and the Warwickshire Farming partnership was born.

Six miles down the road at The Elms farm near Marton, Mr Ellis grows a similar rotation, leading many to believe the pair would run into problems trying to share a combine.

“Everyone said you won’t make it work, you will want it at the same time, but they are on much kinder soil than us so we have cut their OSR and barley before our farm is even ready,” says Mr Russel, while also acknowledging that it wouldn’t work for everyone.

“Actually we have found that timeliness is as good or better than if you’re on your own, and if its showery we can cut a bit on each farm so no one is overwhelmed with wet wheat,” adds Mr Ellis.

Halfway through the first harvest it was decided that the arrangement was working so well that they should look to streamline their tractor fleets too.

Both were running a Challenger, so they swapped one for a Fendt 939, which has an integrated variable tyre pressure system, to give them the best of both worlds of tyres and tracks.

Between the two of them they were also running three smaller tractors, which were replaced with a 160hp tractor per farm for everyday work and grain carting.

Trailers also came under scrutiny, with Mr Ellis’ 14t trailer being identified as a weak link in the chain.

A second 18t Stewart trailer was, therefore, purchased to match Mr Russell’s, eradicating the previous need for a third trailer at times during harvest.

So far, the foursome have been able to keep the partnership fairly casual, with one farm making the initial machinery purchase and then billing the other farm for half, but eventually a more formal arrangement is likely to be needed.

Both partner’s fathers, while involved, have allowed their sons to lead the enterprise.

“If they thought we were doing something wrong, they wouldn’t let us do it. They are always over-cautious when things come up, they are all for slowly, slowly, while we want everything now,” says Mr Ellis.

Key to making it work is to split everything 50:50, but not to worry over every last penny. The two 400ha farms, combined with 400ha taken on by the partnership under contract, is now run as a single 1,200ha enterprise.

At this scale, each man takes on a specific task, with Mr Russell doing cultivations, spraying and fertilisation, and Mr Ellis operating the combine and carrying out the drilling, with help from their fathers.

Machines always leave each farm full of diesel, and all of the machinery is under a warranty and service package so that neither party feels obligated to carry out repairs based on where it broke down, while also fixing costs.

Also key to making the arrangement work is ensuring that each machine only has one operator, ruling out the possibility of having petty arguments when things inevitably break.

Long term, the pair plan to put a machinery replacement policy in, with money from the additional contracting work already being put aside for future investment into machinery.

The arrangement over the next five years will save both parties tens of thousands of pounds in machinery, service packages and labour costs.

“We have just done our first year of accounts since we’ve been doing this and our accountant was pleased and surprised how much more profitable we are.

“I hope that we have future-proofed both businesses for the foreseeable future, and by the time Brexit happens everything will be up to date.

The investment in machinery also means that the pair have scope to take on more work, and could increase their cropping area by another 400ha without any further purchases.

“There is the opportunity that when farmers retire in the area, we are in a strong position to take on any contract work if it came up. We are moving to newer kit, which you would hope would appeal,” says Mr Russell.

Running newer kit and pairing up have both had the desired effect of keeping additional labour costs to a minimum, as finding reliable and skilled labour is a nightmare, they say, and neither farm could afford to take on more than a part-time worker.

More immediately, the pair will be upgrading their 6m Vaderstad Rapid Horsch Sprinter drills to an 8m Horsch Sprinter due to its versatility, and will also replace the two 24m self-propelled sprayers with a 32m in the future.

“I’m over the moon with how it has gone, I would never have thought we would have a combine of that size on the farm, but it can be started small by sharing a baller or tedder.

“Two farmers over the hedge with the same drill doesn’t make any sense anymore, although I don’t think there is anyone else I would want to go into it with,” says Mr Russell.

Mr Ellis agrees. “All four of us have got a similar work ethic, and we all pull in the same direction. We are good at talking it through, decisions are made jointly and everyone has to agree.”

However, one decision yet to be made is which colour green to go for on the next machine.

“We have always been Fendt, but Tom and his dad like John Deere, so I don’t know what we will choose.”