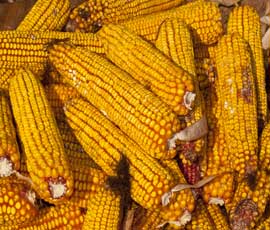 Despite speculative funds baling out of wheat earlier in the week, fundamentally nothing has changed, say traders. In the short term, we are still looking at a very tight close to the end of the current crop year and longer term, prospects for the world maize crop will continue to drive what is happening in wheat markets.

The US Department of Agriculture forecast another increase in both maize and soya bean areas for this year at its outlook conference this week.

Although a larger maize area is expected to produce a new record crop, closing stocks will fall for a third successive year unless yields are exceptionally high, according to the International Grains Council.

World wheat supply and demand is likely to be broadly in balance in 2011-12, it says. The world crop area will rise by about 3%, making the 2011-12 wheat crop the largest since 1998, with strong prices boosting plantings in several countries.

But with demand rising, too, this will leave stocks tight and markets nervous on any weather news.

Concerns over prospects for the Chinese wheat crop have eased slightly as snow has fallen in some areas, giving frost protection. However, substantial spring rainfall will be needed if the crop is to deliver normal yields as some areas have had their worst winter drought in 200 years.