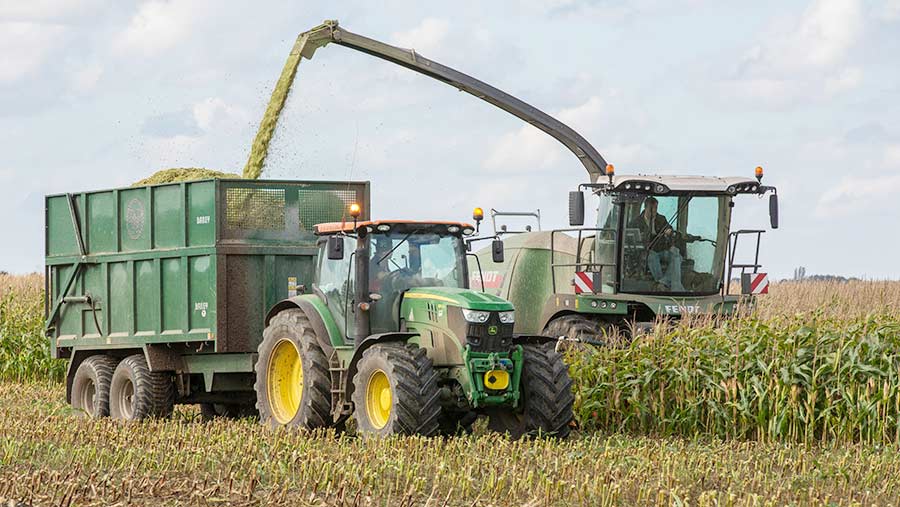 Farmers harvesting maize early are being advised to establish crops straight away in order to prevent any soil erosion.

Many growers are harvesting crops two to three weeks earlier than usual because of dry weather in August and September and an increase in the use of early-maturing varieties.

As a result, with no crops and root structure in the ground to absorb any rain, soil left exposed could be vulnerable to erosion.

“Ideally you should look at planting wheat or grass straight after harvest. The soil profile could soon become saturated if you don’t go in early.”

Because of the early harvest, growers could get away with establishing a grass ley now, explains John Spence, seed sales specialist with Limagrain.

“There is still time to establish a quick-growing Italian ryegrass sward, so you are able to get production from it in the spring,” he says. “This will help reduce soil erosion. However, we are coming to the end of the time ryegrass can be successfully grown.”

The other option is forage rye, which can be drilled at the same time as other cereals, from mid-September to the beginning of November.

The benefit with forage rye is it can grow at lower temperatures and can produce good early spring growth, which can be used for an early turnout for cows or an early graze for sheep, or can be zero-grazed.

Mr Spence says direct-drilling forage rye is the best option for establishment. “Direct-drilling means you are not loosening the soil and you will also have a better-consolidated platform to graze come the spring,” he says.

With earlier varieties of maize helping bring forward harvest dates, there is the potential, Mr Spence says, for farmers to take advantage of growing cover crops for the greening measures, which must be established by 1 October.

Hugh McClymont, research farm manager at SRUC Crichton Royal, Dumfries, has been sampling maize for the Farmers Weekly/Grainseed Maize Watch series. He has been growing maize under plastic film to ensure that maize reaches 30% dry matter for feeding.

“We have moved to growing all the crop under plastic because we want an early October harvest to enable us to drill wheat or grass seeds into the maize stubbles,” he says. “The wheat or grass plants then utilise farm nutrients and prevent soil erosion.”