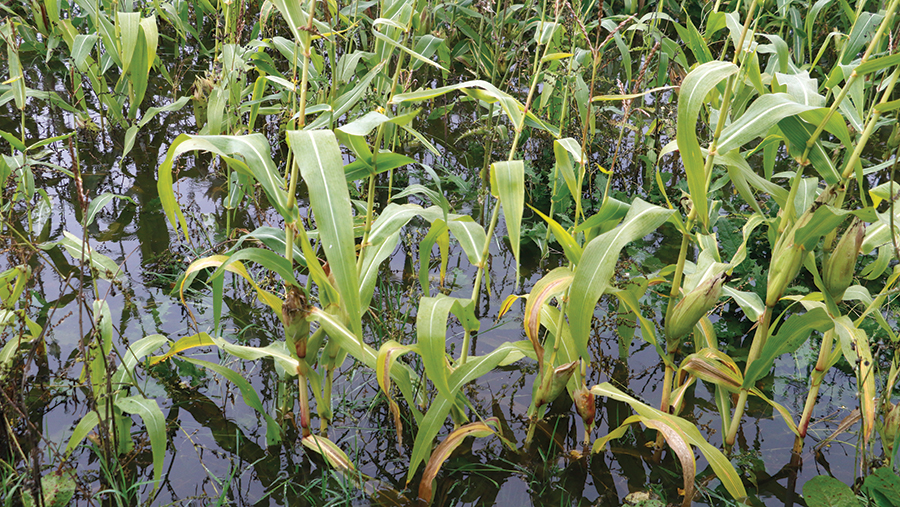 Prolonged rain has made maize harvesting difficult in recent days, with some suffering with flooding and high rainfall.

Maize maturity has already been slowed by rain as green plants have taken water up stems, actually making them go backwards instead of maturing, and harvest is now expected to be delayed further.

He is advising farmers to keep public roads clean, chop crops higher up, ensile maize with an anti-fungal additive and tine ruts to prevent surface runoff.

“Raising the cutting height will reduce the amount of soil-contaminated leaf harvested. Remember, 60% of the crop yield is the cob, so cutting high will not significantly reduce yield and will greatly reduce risk.”

He says farmers affected by crop flooding will be at higher risk of mycotoxins and bad bacteria, such as listeria and clostridia, and should therefore use an anti-fungal, clostridia-controlling additive.

“In an uncontrolled fermentation there is a risk of yeast and mould developing in the clamp. Acids will cause a rapid pH drop, but your additive should also be aimed at yeast inhibition. ‘Good’ bacteria will help improve aerobic stability during feed out.”

Early indications from 32 samples taken in mid-September by Wynnstay from Wales and the Midlands suggest dry matter (DM), starch and metabolisable energy (ME) may be lower than previous years.

“There’s a lot of maize around, however many crops were drilled into challenging soil conditions, which slowed establishment. This appears to have had an impact on the potential yield and quality of some crops,” says Wynnstay’s Dr Simon Pope.

There was a wide range in quality across the 32 samples analysed, with DM content ranging from 17.6% DM to 33.1% DM. The target dry matter at which to harvest maize is around 32%. Only one-quarter of the samples achieved dry matters of 30% or higher.

“This means that harvest will be slightly later this year compared to the previous two seasons, and the challenge of the recent excess rainfall may well delay harvest further.

“This really does emphasise the importance of growing an early variety and ensuring rapid establishment, because at the time of sowing, we have no idea whether or not an early harvest will be achieved,” adds Dr Pope.

“To secure the best-quality crop possible, we must ensure we’re harvesting at the correct maturity, and not simply chopping because others in the area have started.”

Independent nutritionist Hefin Richards of Rumenation says, ideally, maize should not be fed in the same year it is grown.

“Many do not have the carryover to allow this. If maize is to be fed less than two months post harvest, create a small additional heap rather than opening the main clamp.

“This will allow the main clamp to remain sealed for longer, producing a better, more efficient fermentation.”