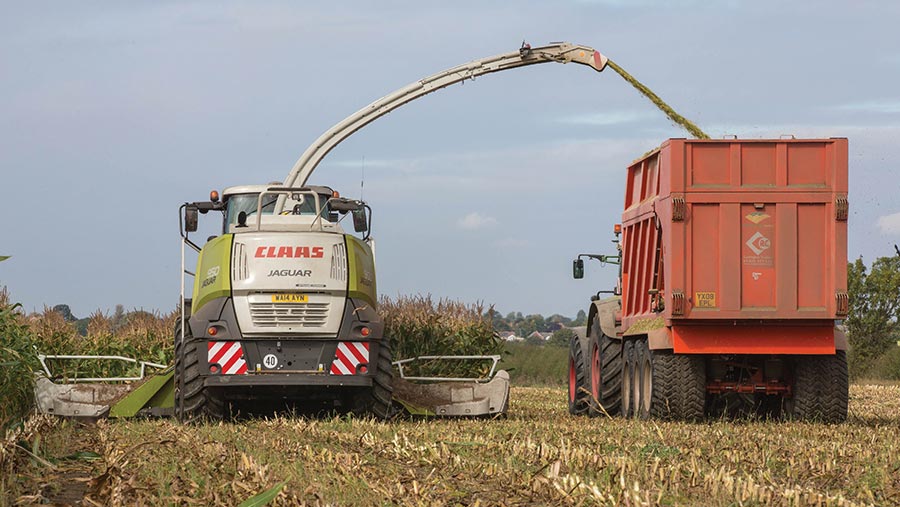 A trial in Norfolk found undersowing maize with a range of grasses, as well as vetch, creates a valuable green cover that helps to condition soil and improve organic matter levels, while also providing the benefit of some autumn post-harvest sheep grazing.

When it comes to maize production, increasingly wet and unsettled weather has highlighted the importance of undersowing in reducing soil structure damage – but getting companion crop establishment correct is crucial.

The trial, set up and run by Association of Independent Crop Consultants (AICC) agronomist Craig Green, aimed to investigate regenerative farming techniques by undersowing maize with a range of mixtures in order to study its impact on soil health.

In total, 11 different mixes consisting of chicory, grasses, vetches and clovers were grown, each in 8m-wide plots, the length of the field, across three different farm trial sites.

The companion mixes were planted when the maize crops (variety CS Cranberri), were at the four- to six-true leaf stage, using a home-made Variocast seeder unit to broadcast the seeds. 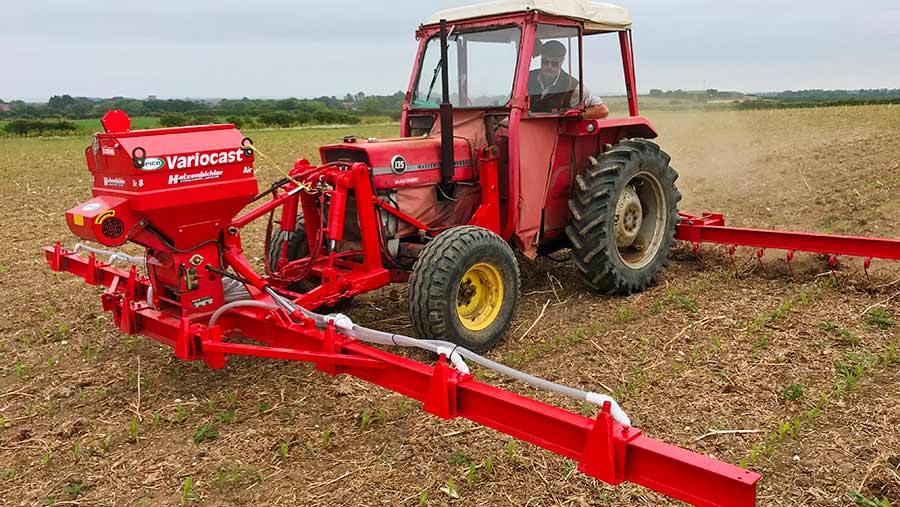 The simple and effective piece of machinery measured 4m wide and was mounted on the front of a Massey Ferguson 135 tractor, spreading seeds between the maize rows, which were planted in 75cm spacings.

A small tined-harrow followed, attached to the lightweight tractor to gently cover the seed, placing it in the top 1cm.

“Establishment of such fine, small seeds can be difficult on our light sandy clay loam soils in Norfolk, but we aimed for minimal soil disturbance and just a light scratch with the harrow to get the seeds in,” says Mr Green.

Trial results were variable, says Mr Green. “Where they were good, they were outstanding, but where they were bad they were complete failures – but we’re learning quickly. We seem to find that maize trials always vary as crop growth is heavily dependent on the season.”

Unfortunately, two of the undersown fields at Fakenham and Dereham, experienced a full week of 30C heat shortly after broadcasting, causing germinated seedlings to die in the extreme temperatures.

“The small seeds were just not protected from the sun’s intense heat and were consequently cooked. In hindsight, we should have sown the crop deeper, as this would have protected the seeds and moisture more,” he explains.

However, the remaining site, drilled 10 days later, successfully established, with the help from 22mm of rain the day after broadcasting, which got the crop triumphantly up and away.

“This highlighted to us how the weather plays an essential role in crop production and that moisture is key – you could have the best seed-beds and the best growing conditions possible, but it’s down to the season,” he says. 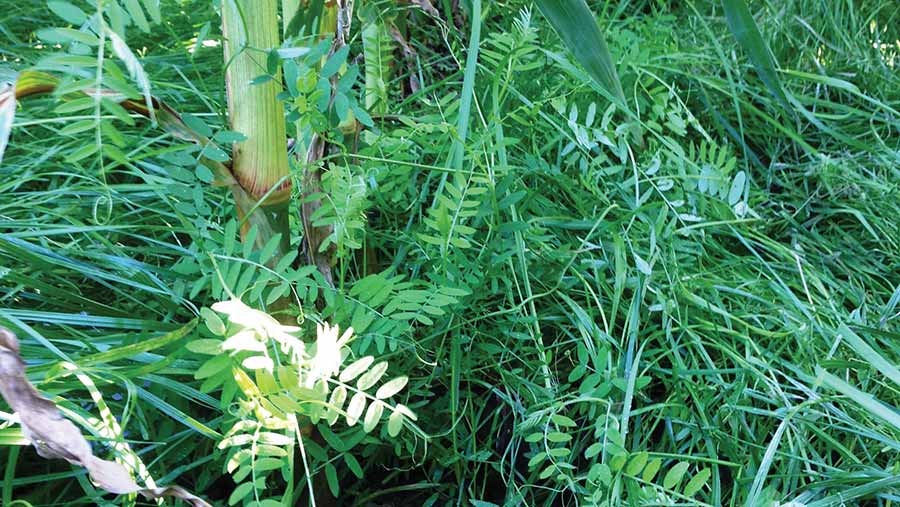 He continues that the undersown maize trials illustrated some real benefits to growers and soil health. During harvest on 28 September, machinery did not leave a wheel mark on the undersown maize areas, whereas, in the control, foragers and trailers were digging ruts and compacting soils.

In addition, soil respiration rates were significantly higher in the undersown areas, with greater organic matter levels, which Mr Green hopes will increase yield in the subsequent winter wheat crop.

Harvest also revealed no yield difference between the undersown plots and the control, averaging 34t/ha.

Of the 11 mixes sown, two stood out. These were an Enviro Max mix by agronomy firm Agrovista and an undersown mix by seed company Horizon Seeds, both of which were sown at 10kg/ha at an estimated cost of £30/ha.

The first mix consisted of late perennial ryegrass and advanced tall fescue, which had an aggressive root system and good ground cover. This allowed for excess nitrogen to be mopped up, while effectively preventing soil erosion. The mix established well and had grown sufficient cover that allowed light sheep grazing after harvest.

“What made this mix good was its steady growth, which minimised competition with the maize. It didn’t get too tall either, which meant an easier harvest as it didn’t get in the way of the header knives,” says Mr Green.

He concludes that the companion mix can be removed via a variety of techniques. It can either be ploughed back into the ground as green manure, grazed by sheep or other livestock or sprayed off with glyphosate.

Mr Green also highlights that the undersown mixes do not encourage pests such as wireworm and leatherjackets, as they are not in the ground long enough to allow pest populations to establish.

Over the past three years, AICC’s Craig Green has investigated other undersown maize trials, where both the crop and companion mix were drilled at the same time.

This year, due to dry weather and low soil moisture levels at the time of maize drilling on 8 June, Mr Green and the trial team decided to test a post-emergence establishment method instead, in the hope that establishment would be better, later in the season.

The undersown mix was, therefore established when the maize had developed four to six true leaves.

Sowing any earlier than this stage would interfere with vital herbicide programmes as companion mixes are at risk from herbicide residues, while sowing any later would see seedlings threatened by large maize crops and be outcompeted for light and nutrients.

“The benefit of sowing post-emergence means growers do not need to worry about weed control as this can pose a challenge when sown at the same time. It also reduces risk of the mix outcompeting maize for water and nutrients as the crop is already up and away,” says Mr Green.

There are, however disadvantages of using this technique as two out of the three trials failed to establish as a result of limited soil moisture.

This highlighted just how vital adequate soil moisture is and the importance of growers being flexible and adaptable to situations, ensuring they make the optimum management decisions.