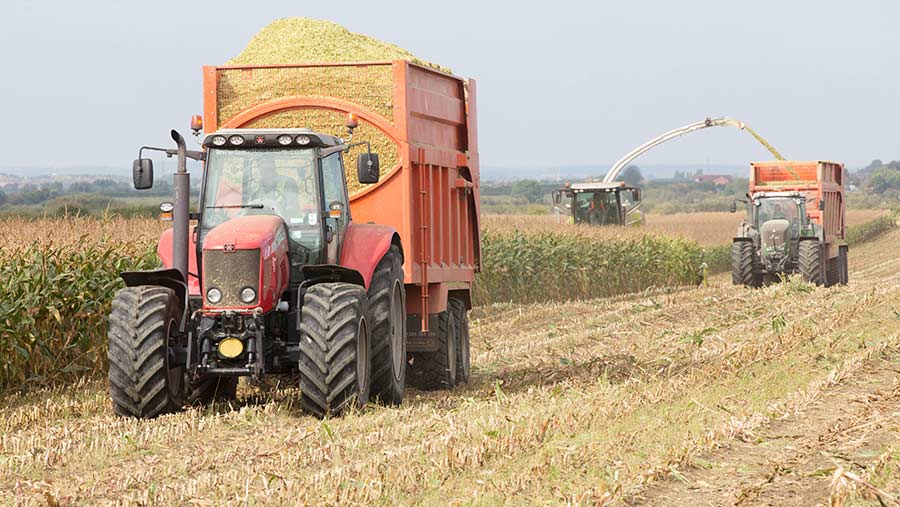 Good weather has allowed harvest teams to start chopping maize with sites in the South East and South West having already started harvesting.

George John, sampling for Farmers Weekly near Narbeth, in South Wales, says his early-sown crops are only three weeks away from harvesting.

“Our sample field was later sown, but the maturity class 9 varieties sown around 20 April are really good, with very firm grains and just starting to dry back from the stem base.”

He estimates yields will be around 16-17t/acre with sheltered spots doing better.

“In a year when we have so much grass silage we need the maize to make a good winter diet.”

Once harvested, maize stubbles should be ripped up to remove the wheel markings from the forager and trailers, advises Neil Groom, technical director for Grainseed.

“Soils are still warm and fields should be planted with winter cereals, grass seeds or cover crops to ensure that nutrients are captured and soil erosion is prevented,” he adds.

A simple tine will open up the soil surface and allow rainfall to soak into the soil rather than running off across the field taking your soil with it. Seed can then be sown and within two-to-three weeks the field could be green and building organic matter.

Work by North Wyke showed that water run-off down a slope reduced to just 1 litre where the field had been cultivated across the slope.

Mr Groom says this should be standard practice on all overwintered stubbles if a crop is not sown.