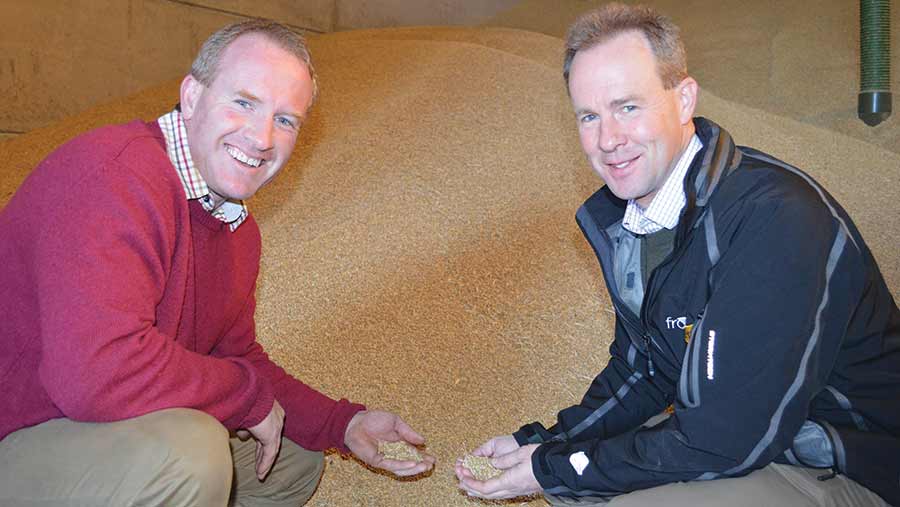 Spring malting barley is the top profit earner on Philip Preece’s south Shropshire farm and this has prompted him to start growing it on heavy land not traditionally used for the crop.

The crop grown on a contract for brewing giant Molson Coors outperforms feed wheat, winter oats and oilseed rape in terms of gross margin and turns in an impressive yield of 8t/ha.

A fixed price of £140-£150/t is being offered by the brewer for the majority of grain produced for harvest 2016, comfortably ahead of the current malting barley price of about £105/t.

Those in the Molson Coors growers group such as Mr Preece can agree on this fixed price for 70% of their crop now for the next harvest if their barley meets the malting grade.

“Before we put the crop in the ground, we know the fixed price, and in nine years out of 10 we have hit the malting specification,” Mr Preece tells Farmers Weekly.

The spring crop suits the parts of the farm with lighter land in a three-year rotation of two spring barleys followed by a break crop of either sugar beet or potatoes.

On the heavier soil, the barley has been grown successfully for three years, offering a spring break in a predominantly autumn-sown cropping pattern.

Last year, the farm produced about 400t of malting spring barley from 50ha. The grain nitrogen content of 1.6% was comfortably under Molson Coors’ maximum 1.8% requirement for the brewer’s specified varieties of Propino and Odyssey.

Grain sold from the 8t/ha spring barley crop virtually produced the same income as a 10.5t/ha crop of a second winter wheat, but the barley crop was grown with significantly lower costs.

The British spring barley cropping area is expected to rise 10% next spring to 727,000ha to take up some of the slack from a 14% fall in oilseed rape planting and a 4% drop in winter barley, while winter wheat is seen as unchanged, according to an AHDB Early Bird planting survey earlier this month.

The saving between the two crops comes largely from fungicides and fertiliser, with the wheat costing nearly £200/ha more to grow than the barley.

“Malting barley is the number-one crop in terms of profitability over the long term, especially with the lower inputs costs,” he says.

Mr Preece, who farms with his father John, looked to expand to spring barley growing in 2007 after the closure of the last West Midlands sugar beet factory at Allscott, near Telford.

The wet autumn of 2012 encouraged a move to increase the spring barley area to 50ha. This meant growing the crop on the heavier land not traditionally used for malting barley, as it tends to produce high-nitrogen grain.

The light land strategy of using 120kg/ha of nitrogen – 40kg in the seed-bed and the remainder at crop emergence – on the sandy loams worked well when drilled in late February/early March, but needed to be adapted for the heavier soils.

With the help of David Allison, agronomist and grain trader at distribution and advisory group Frontier, different seed rates and nitrogen timing were worked out for the heavier land.

The seed rate is increased 5-10% on the heavy clays loams to compensate for the expected later drilling at the end of March or in early April, and nitrogen rates dropped to 100kg/ha.

A two-spray fungicide programme is used, with a T1 spray at the start of stem extension and a T2 application when the barley awns are just visible. Both treatments use a SDHI bixafen and azole prothioconazole mix.

“We don’t cut back on fungicides, as we are looking to produce a quality crop,” say Mr Allison.

The Molson Coors growers group was set up eight years ago with the help of Frontier, as the Burton-on-Trent-based brewer looked to gain greater security of supply for its malting barley needs.

The 150 growers in the group stretch from Lincolnshire through to Shropshire and into Wiltshire and supply about 36,000t of the brewers’ annual 120,000t requirement.

Some 30% of the crop is priced at the average market price from July-September in the harvesting year, and the remaining 70% either on a fixed set price or a price linked to November wheat futures.

The brewer sold its malting business in Burton to French group Soufflet in the summer of 2015, but the contract is largely unchanged. The French maltster supplies Molson Coors, which sells Britain’s best-selling beer Carling and uses 100% UK barley for all its UK-brewed beers.