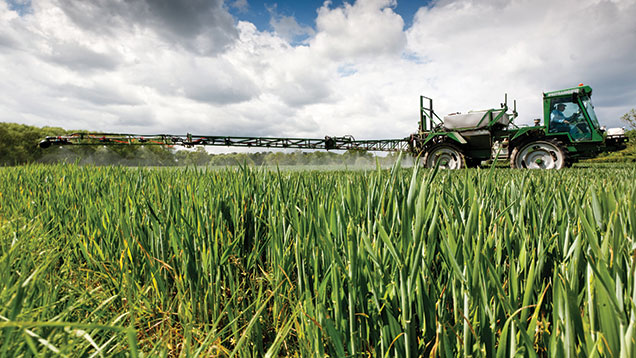 Accurate spray timing should remain the key focus as the flag-leaf treatment approaches in winter wheat, as stretching it too far could prove costly.

With the main target at T2 likely to be septoria, there is every reason to stick to spray intervals and ensure that the gap between T1 and T2 isn’t stretched too far, says Zantra’s technical director, Chris Bean.

“Four weeks is the absolute maximum,” he stresses. “But three weeks is better.”

Christine Lilly of Frontier Agriculture is of the same opinion. “Our feeling is to try not to let it go beyond three-and-a-half weeks.”

The loss in performance of the triazole fungicides, especially in an eradicant situation, makes it difficult to rectify situations where septoria has been able to take hold, they note.

See also: Spraying tips that give growers an extra 1t/ha of wheat

As an SDHI is likely to be part of the mix, Mr Bean’s advice is to wait to apply the T2 until the flag leaf is fully out at GS39. “If you spray at flag tip, which is GS37, you don’t get the redistribution of the fungicide into the lower part of the leaf.”

“It’s something that we’ve seen in our trials and has been confirmed in manufacturer’s work. The SDHIs don’t like going on too early – they work best at full flag leaf emergence, which is different to the old triazole + chlorothalonil or strobilurin mixes.”
Christine Lilly, Frontier Agriculture

“It’s something that we’ve seen in our trials and has been confirmed in manufacturer’s work.

The SDHIs don’t like going on too early – they work best at full flag leaf emergence, which is different to the old triazole + chlorothalonil or strobilurin mixes.”

Miss Lilly points out that hitting the ideal timing on all crops can be tricky on larger farms.

“That’s why sprayer operators tend to start spraying when the flag leaf is half out. It lets them finish by the time it’s fully out, which is better than finishing late.

“Of course, there may be an opportunity to target different varieties according to whether they are early or late developing,” she continues. “Cordiale and Gallant, for example, will be ready for their T2 spray before a variety like Revelation is.”

Mr Bean acknowledges that the wider use of wheat varieties with better disease resistance ratings could shift the balance of fungicide programmes, but highlights that most of the new varieties tend to have better yellow rust ratings than septoria scores.

“There’s a whole plethora of varieties with 5s and 6s for septoria,” he says. “But they all respond differently to spray programmes.”

One of the challenges for growers this year is knowing how much to spend on the less responsive varieties, he acknowledges.

“It is a difficult call. A variety like Revelation, for example, gave a 1t/ha response in our trials last year, when the average was 3.3t/ha. Likewise, Skyfall gave 2t/ha. Getting a return on investment at those levels will require some alterations.”

Easing back on the T1 spray is more straightforward than making cuts at T2, advises Mr Bean.

“But you can make small changes to the T2 as well, depending on the season.”

One way of achieving this is to use a lower rate, he points out.

“It will depend on what you’re dealing with and how well the previous sprays have worked. Most T2s will have an SDHI in them, but not all the T1 applications will have done.”

An SDHI will be included in all of Frontier’s wheat T2 recommendations, reports Miss Lilly.

“Of the two main choices, we’ll recommend using Skyway (bixafen + prothioconazole + tebuconazole) at between 1-1.25 litres/ha where septoria is the key concern, but Ceriax (fluxapyroxad + epoxiconazole + pyraclostrobin) at 1.8 litres/ha where the rusts also need controlling.

The inclusion of a strobilurin in Ceriax helps with both yellow and brown rust, making it a better choice for varieties such as KWS Kielder, she explains. “Price wise, the two products are equivalent, so you can match them up according to what’s being grown.”

Mr Bean also advises adding a strobilurin at T2 where rusts are a threat. “They give a better level of control and their inclusion means that yellow rust doesn’t get the chance to come in after the spray has been applied.”

Zantra trials saw a mean yield benefit of 0.7t/ha where a strobilurin was part of the T2 treatment. “Our variety development site in Kent suffered from high levels of brown rust in 2014. The strobilurin was more than paying for itself with a margin over input cost of £90.”

The other reason for including a strobilurin at T2 is where milling wheats are being grown and grain protein contents need a boost.

Close to a 1% uplift in protein can be achieved from a late season programme combining 40kg of urea on the ear and a strobilurin at flag leaf, reports Mr Bean.

“This is because the strobilurin improves the ability of the plant to capture nitrogen from the soil.”

There are also implications for feed wheat, he continues. “We found that by applying a strobilurin and 220kg/ha of nitrogen to Relay, there was a 0.5t/ha yield benefit, giving a £35/ha return. In contrast, applying 40kg more nitrogen without including a strobilurin only gave enough extra yield to cover the cost.”

What about a multi-site protectant at T2?

Given the concerns about fungicide resistance, should a multisite protectant be included at T2?

Hold fire, advises Mr Bean, who points out that the T2 spray goes into a different environment to the T0 and T1.

“The final decision should be based on the choice of other products,” he says. “It’s well known that chlorothalonil and the bixafen formulations don’t like each other very much.”

Christine Lilly confirms that there may be an antagonism between bixafen and chlorothalonil in eradicant situations. “But it mixes fine with Ceriax, if it’s needed.”

An alternative approach would be to add Bravo to the late PGR application at GS37, she suggests. “It could go on at this timing, which is more like T1.5, to avoid any clashes.”