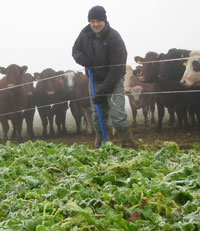 After significant investment last year, 2009 will be a year of consolidation at Fearn Farm in the Scottish highlands.

“Cautiously optimistic” sums up how the Scott family feels about the prospects for their farm business in 2009.

John Scott, who runs Fearn Farm in partnership with his father, James, and their wives, Fiona and Janet, says 2009 will be a year of consolidation. But the family will still strive to improve the farm’s management systems.

“We want to run as efficient an operation as we can and our aim is to make a profit without relying on a subsidy cheque,” says John.

The past year has seen many changes as a result of the farm’s role as Scotland’s most northerly monitor farm. However, 2009 sees the end of Fearn’s three-year stint as a Highland monitor farm, with the final meeting to take place in February.

“There’s no doubt the farm business has benefited from being a monitor farm and from the ideas and experience of the farmers in the community group,” says James. “Our record-keeping and the data we have available on the farm computer are also much better, as we have needed to have the numbers at our finger-tips.”

Among the management changes successfully introduced as a result of the advice of the monitor farm community group was the decision to out-winter their lambing ewes, now housed just before lambing.

There has been an improvement in the number of lambs meeting Mey Selections’ grading specifications, with only 4.3% of their lambs falling outside specification, compared with the Scottish average of 36%.

“We’d like to improve on that, though,” says John. “I’m not happy with the number of Rs we turn out. In the past we’ve had up to 60% away at E and U grades and I’d like to achieve that again. I’d also like to see more of an incentive for farmers to achieve E and U grades.”

A priority has been getting the lambs to finish quicker and, despite using a lot of maternal sires last year, they managed to get lambs away earlier.

“The challenge for the coming year is to build on that again. Last year we used creep feed for the first time in our commercial lambs for a number of years and we found that really made a difference and was more cost effective than putting fertiliser on to grass,” John says.

The Scotts will electronic-tag their pedigree flock this year with a view to extending it to their commercial flock.

“I can understand situations where electronic tagging won’t work, but in our situation it should improve efficiency and reduce labour requirement,” John says. “By using an electronic reader and downloading information to the computer we will take away the need for the inevitable stained, scrappy bits of paper in the lambing shed.” 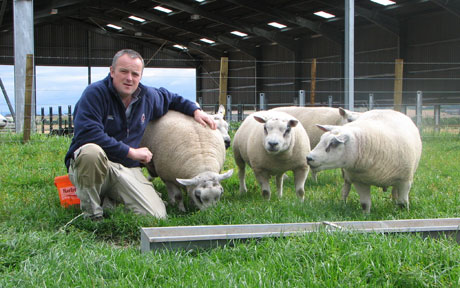 The Scotts are buying a full electronic tagging system, including software and reader, from Shearwell at a cost of about £1400 plus tags at 75p each.

Another of the main changes in the past year has been an increased acreage of stubble turnips, taking the area sown for cattle and sheep forage up to 170 acres.

Broadcast sowing stubble turnips with a slug pellet applicator was trialled very successfully. About 100 acres were sown and the technique will be repeated next year, despite a question mark over crop establishment after a particularly late harvest.

“The stubble turnips should save is a fair bit on concentrate feed costs,” says James. “Broadcasting Rondo stubble turnips with a slug pellet applicator cost us £13.50/acre to establish and the best result was a crop which went in after a field of spring barley and yielded 18t/ha. Our worst yield was 6t/ha with break even about 4t/ha.”

One of the greatest success stories in the suckler herd has been the percentage of cows scanning in-calf, which has jumped from 83% in 2006 to 96% in 2008. This has been achieved without any increase in “bull power”, which stands at a ratio of one bull to 40 females.

The improvement is a result of a ruthless approach to culling less prolific and problematic females over the past few years. The use of CoseIcure iodine and copper boluses has also helped.

The Scotts have invested about £150,000 in a new cattle shed and handling facilities at Fearn with 2008 its first year of use. “That cost does seem hard to justify at the moment, but we believe it will prove a worthwhile investment in the longer term,” says John.

The pair agree the improvements they have made in recent years have resulted in a simpler system with a low labour requirement. The time required to feed and check all the stock on the farm this winter is just one-third of that needed just a few years ago.

On the arable front, Fearn will sow about 500 acres of spring barley this season, primarily Optic, with some Catriona, plus a small acreage of oats and peas.

John and James are on tenterhooks waiting for feedback on the malting barley contract prices for 2009. “Our hope is that contract price will be above the £160/t mark. £140/t is just no good,” says James. “I’m hopeful that the message is getting through to maltsters, who now seem to be more aware that we have other options for our land if the price isn’t right.”

One possible investment for the coming year is a grain drier. The crop is harvested by contractors and moved direct to maltsters, but the pair would like to improve their grain handling facilities to allow them more marketing flexibility and plan to apply for Scottish Rural Development Programme funding to assist with the cost.

Other than the drier, however, they are adamant there are no plans for significant investment in the next year. “After some hefty investments in the past 12 months, 2009 will be very much a year of consolidation for us,” says John.