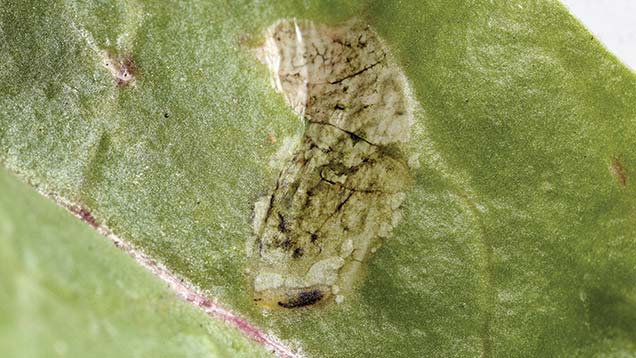 Sugar beet crops across Europe have been subjected to increased attacks from mangold fly in recent seasons, and new research aims to help growers control the pest.

In Britain, the attacks have been localised and confined to coastal areas of East Anglia, and Prime Agriculture agronomist Peter Riley says he has seen yield losses as a result over the past two seasons.

The fly, also known as beet leaf miner, becomes active in April and early May and lays eggs on the underside of leaves, where maggots hatch and burrow into the leaf.

Tunneling within the leaf causes blisters and results in plants being more susceptible to herbicide damage, plant vigour can be reduced and young plants killed.

“We are well covered by the seed treatments we have in sugar beet, but it’s later generations that occur after treatments run out of steam [about 28-30 days] that are causing the problem,” says Mr Riley.

They recently lost organophosphate insecticide dimethoate, which effectively killed both eggs and maggots in the crop, so growers only have pyrethroid products left.

“Once the maggots are trans laminar [inside the leaf], they are difficult to hit with pyrethroids, so the control window is very small.

“Eggs are often laid over a long period too, so they will be hatching over a number of days, making spray timing extremely difficult,” explains Dr Stevens.

He worries using more pyrethroid insecticides may have a negative impact on beneficial insects that help suppress other pests, such as spider mites.

“It’s a fine line, as you might have to do something to control the mangold fly, but could be creating problems elsewhere,” he adds.

Dr Stevens says that fellow sugar beet producing countries Germany, Belgium and the Netherlands have all been experiencing higher numbers of the pest.

The BBRO and Adas are investigating control options this season in hotspots and the BBRO will also be keeping a close eye on developments from similar research across the channel in the Netherlands.

The Institute of Sugar Beet Research (IRS) is the Dutch equivalent of BBRO, based in Bergen op Zoom in the south of the country, near the Belgian border.

Elma Raaijmaker, researcher in pests and diseases, says that last year the mangold fly was a particular problem in the country and she believes the loss of insecticide options such as dimethoate have contributed.

They are conducting trials using current and older chemistry to gather data on the most effective options, but more importantly looking at the potential of a decision support system for insecticide timings.

“We are researching how to catch the adult flies when they begin migrating into the crop and hopefully be able to send an alert to farmers on when to spray. Here in the Netherlands we have a similar system for the onion fly,” she adds.