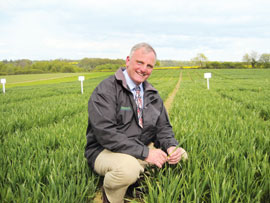 Masstock research and development manager Colin Lloyd estimates that the cost of missing the full premium equates to £127/ha.

Assuming a yield of 8.5t/ha and a price of £185/t, the value of the crop including a £25/t milling premium comes to £1,573/ha. That gives you an additional £40/ha over feed wheat when including the extra growing costs such as extra nitrogen and a more robust T3 application, he says.

“But for a milling wheat crop that fails to meet full specification, the value tumbles to £87/ha less than a higher-yielding feed wheat crop.

“The first thing to consider is the reason for not meeting the specification and by how far? Was it Hagberg, specific weight or protein content?”

In his experience, relatively few failures are down to specific weight or Hagberg Falling Numbers. “Hagbergs can wander if it is a horrendous harvest.”

The key with Hagbergs is to prioritise milling wheat at harvest, even if there are areas of feed wheat with lower moistures as there is more to lose by failing to secure the full premiums.

However, the main reason many fail is protein content. Mr Lloyd points to the latest HGCA data where the number failing to meet full milling wheat specification falls from 70% to 54% when looking at 12.5% rather than 13% protein.

Mr Lloyd believes it is down to nitrogen fertiliser inputs being a little shy. “More successful milling wheat growers are using about 50kg/ha more N.”

Growers need to reassess their nitrogen inputs and ensure they know the nitrogen reserves in the soil at the start of the year. But care is needed to remain within Nitrate Vulnerable Zone and RB209 limits.

This season, he believes meeting protein maybe less of an issue as yields are likely to be held back by the drought, particularly in the east. However, there will still be some who will struggle to achieve target proteins, such as in the west where it is wetter. Even in a dry year like 2003, many samples still fail (see graph).

For those getting to 12.2-12.5%, there are still some agronomic tweaks that can help lift levels, he says. “It is widely accepted that using strobilurin fungicides can add up to 0.5%.”

Another option is to apply late nitrogen, but this only had a surprisingly small effect in the milling wheat trials conducted at Throws Farm.

“Also, in our ethanol work where we are looking for low protein rather than high, by applying the nitrogen by GS32, we expected to increase yields and reduce protein. We wanted to limit protein to maximise starch.”

However, the difference in protein content when applying earlier versus much more of the total nitrogen applied up to flag leaf was again surprisingly small (0.2-0.4%). Sulphur is also important, as it helps maximise nitrogen uptake. “In the milling wheat work, we typically apply Double Top to supply 50-60kg of S03 at the first spring pass.”

But if you are still a “country mile” away from specification, such as 11.5-12% protein, then you may need to consider if milling wheat suits your farm.