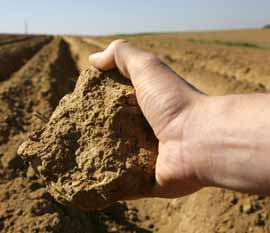 March 2011 was the driest for nearly 60 years, according to provisional rainfall figures from the Met Office.

Average rainfall across the UK from 1-29 March was just 39.1mm – 41% of the month’s usual amount. England and Wales saw the lowest rainfall for almost 100 years, with Lincolnshire and East Anglia registering just a couple of millimetres of rain.

The early figures mean it was the driest March since 1953, when 41.6mm of rain fell. However wet weather during the last few days of the month means the Met Office’s final figures will be higher.

The lack of rain has started to cause problems for some growers. Lincolnshire Farmacy agronomist Philip Vickers said the dry weather meant crops were struggling to pick up recently-applied nitrogen.

“The lack of rain is causing concern in pulse crops and I am not anticipating great performance from spring bean pre-emergence chemistry,” he said.

“At present, it is looking likely that a follow-up treatment of bentazone will be needed early post-emergence.”