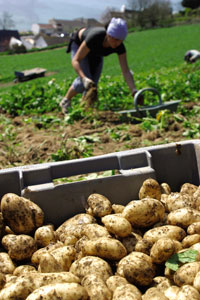 Potato prices jumped over the past week, reflecting the continued buoyant start to the crop season.

The Potato Council’s GB average price rose by £10.95/t, to £172.01/t, almost £41/t higher than the same time last year. The free market average also remained firm, despite a slight fall of £2.55 to £184.79/t, as available supplies increased in the packing, processing and bag sectors.

Harvest was making good progress, with clearance estimated at 10,000ha (24,700 acres) by 6 August, or 8% of the planted area. That compared with 6.5% progress at the same time last year, and 8% in 2008. But, dry weather meant crops were slow to bulk, and yields would be down in unirrigated areas.

In Scotland, packers were using up old-season stocks. “The full changeover to new crop appears likely to continue until well into August.” Most early crops had now been cleared and follow-on supplies were currently light, it added.