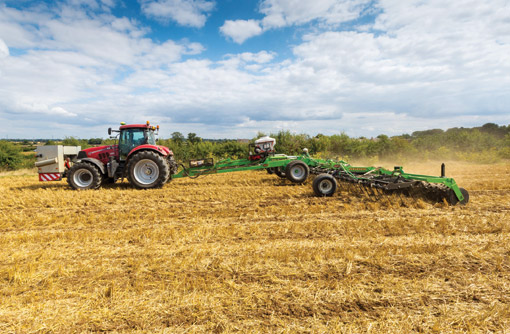 Low blackgrass dormancy and adequate soil moisture is offering the perfect chance to get on top of the escalating annual grassweed this autumn.

It is well-documented that one of the most effective ways of getting on top of blackgrass populations in winter cereals is delayed drilling and using stale seed-beds.

Despite this, many growers may find it difficult to hold their nerve after the difficult drilling campaign last season, where a proportion of the planned winter wheat area was left undrilled.

The current harvest is also running behind schedule for many, adding to the anxiety to get winter cereal crops in the ground at the first possible opportunity.

ProCam’s national agronomy manager Nick Myers points out that good planning of drilling schedules will go a long way to alleviating any fears that growers may have.

“You always have to sow one field last, so make it the one with the greatest grassweed problem.

“This will buy as much time as possible to maximise pre-planting control and be prepared to delay drilling as long as possible to stimulate and spray off successive flushes of weeds,” he explains.

Results this year have shown that 90% or more of the blackgrass population was controlled when drilling on 1 November, compared with 60-70% from a 27 September drilling, whatever the cultivation method.

Agrii’s trials manager Steve Corbett points out that giving yourself sufficient time ahead of planting is key, with late germination of blackgrass resulting in higher levels in the crop.

“A glyphosate hit ahead of a later sowing really took the pressure off post-emergence sprays that are now giving us barley 25% control at the site,” he says.

However, growers willing to wait until the first week of November to drill their winter cereals will be few and far between this autumn, unless behind root crops.

So what can be done to maximise pre-drilling control with minimal delay to drilling?

Stale seed-bed management will be key and Hutchinson’s technical manager Dick Neale urges growers to make the most of the ideal conditions to hit blackgrass where it hurts.

He says blackgrass was later maturing this year and that maturity coincided with the hot and dry spell through July, which points towards low dormancy in the seed that will have returned to the soil.

“That doesn’t necessarily mean that you will get 100% blackgrass germination, but the moisture and warm soil temperatures should mean it will germinate quickly,” he explains.

Mr Neale reminds growers that a stale seed-bed is created by a shallow cultivation after harvest to no more than 50mm and immediately rolled down tight to minimise moisture loss.

He also points out that recent showers may mean rolling stubbles will be sufficient to stimulate blackgrass growth, particularly in a direct drilling situation.

“People considering early drilling should look at the weather and remember that it is a completely different year. Don’t react to what happened last season.”

Delayed drilling will also have the advantage of maximising efficacy of the pre-emergence residual herbicides, as they will be applied in ideal cool and moist conditions, adds Mr Neale.

Independent tillage specialist Steve Townsend believes two stale seed-bed cycles will be much better than one, due to the biology of the blackgrass plant.

The first flush of blackgrass seedlings excrete root exudate that, if allowed to build up, can inhibit any further germination of seed in and around the soil surface, so he advises a little and often approach.

“As well as cutting several days off the stale seed-bed cycle, prompt glyphosate treatment limits that inhibition and enables another flush to be stimulated and sprayed off,” explains Mr Townsend.

Looking ahead, Mr Corbett says that where blackgrass burdens have been high, seed can be ploughed down and left there out of harm’s way for the coming seasons.

“Don’t bring the seed back up next year with the plough, deep discs or tines next year. Stick to shallow tillage to keep remaining seed near the surface where it can be managed with stale seed-beds,” he concludes.