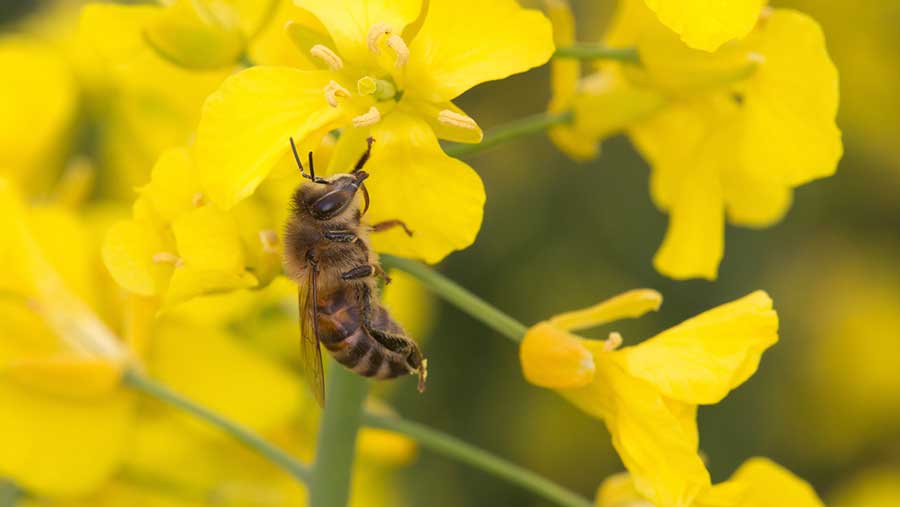 MEPs have blocked a Conservative bid to prevent a total ban on three neonicotinoid pesticides, which have been linked to a decline in bee health.

Mrs Girling, who represents south-west England in the European Parliament, had attempted to block a move against a total ban on three neonicotinoids, which are currently subject to a partial EU ban, which has been in place since December 2013.

See also: Cereals 2017 – Wheat and beet could be hit by extended neonic ban

She had argued the temporary ban on the three chemicals – thiamethoxam, imidacloprid and clothianidin – is not supported by legal and scientific evidence.

Mrs Girling described the plan for a total ban as “disproportionate” and warned it could lead to the use of more harmful pesticides.

But although eight MEPs backed her motion, with seven abstentions, 43 MEPs on the environment committee voted against the proposal on Thursday (22 June).

The European Commission will have the final say over whether neonicotinoids will be subject to a total ban.

Reacting to the vote, Chris Hartfield, NFU acting chief science and regulatory affairs adviser, said any further restrictions on neonics would be a massive blow for farmers.

“A total ban on neonicotinoids would be devastating for some crops. For sugar beet, there are no realistic alternatives. It could mean the end of sugar beet production within the EU.

“For other crops it has a whole range of effects and impacts. It could reduce wheat production by 0.6t/ha which would have a huge impact on food production. Brassicas and some root crops would also be seriously affected.”

Dr Hartfield argued there still is “no clear evidence” neonicotinoids are responsible for a decline in bee health ­– and the impact of a total ban had not been assessed.

“Seed treatments would be replaced by sprays and we do not know whether these are greater or less risk to the environment than neonicotinoids,” he said.

“The European Commission has not carried out an impact assessment and the precautionary ban was rushed through.”

Defra secretary Michael Gove told BBC Radio 4’s Farming Today programme this week that although the EU has helped to raise environmental standards “some of the means by which the EU has sought to improve the environment haven’t always been the most effective regulatory tools”.

Mr Gove added: “Getting those things right will be critical to making Brexit a success.”

But Sandra Bell, a nature campaigner at Friends of the Earth, urged the UK government to impose a total ban. “There is mounting scientific evidence supporting the European Commission’s proposal to extend the ban to more crops, and this should now be backed by national governments.”